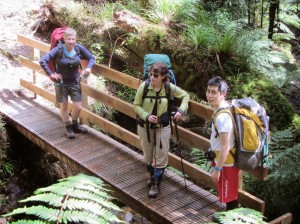 On Friday night at the Holdsworth roadend our group decided not to bother setting up a tent and a fly. As it was fairly gusty but reasonably warm and only lightly drizzling, it seemed simpler to set up mats and sleeping bags in the semi-open shelter by the carpark (including underneath the picnic table), and we felt only a little rain during the night.

By Saturday morning the wind had lessened and the day was fine. We set off for Tōtara Flats around 8.30 am after a quick breakfast. Most of the walk was under the trees so the only place with a good view was around Rocky Lookout. We met several walkers and a runner along the way but once we reached the turnoff to Tōtara Flats we had the track to ourselves.

We headed downhill to the Flats into taller trees and the track became more like a Tararua tramping track (lots of roots and muddy bogs) but was still fairly dry. The route to Tōtara Flats passed through part of DOC’s Project Kākā area, and we saw one noisy kākā on the Tōtara Creek track. Patches of white-flowered native clematis showed above the trees here and there. 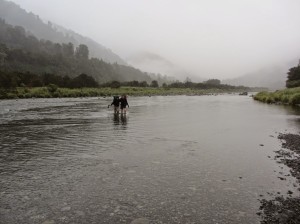 After reaching the hut around 2pm, Richard, Jane, and Ken walked downstream to have a look for a suitable place to cross the Waiohine River the next day. Eventually a SPOT was chosen, across to a boulder bank near Sayers Hut (which was out of sight in the trees), and Richard and Jane headed across. Jane involuntarily sat in the river, receiving a timely reminder that large flat rocks tend to be slippery. After wandering up a stream and among the trees Sayers Hut was located and the track up the hill behind it. This reconnaissance probably saved us 30 minutes on Sunday morning.

Tōtara Flats Hut is a modern, spacious, serviced hut (sleeps 26) but rather quiet on Saturday, with just the four of us plus two hunters and later another hunter arrived with his young daughter and a very active German Wirehair hunting dog. Dinner was a tuna and vegetable curry with rice, followed by fruit crumble (sultanas, dried apricots, and apples, with a gingernut topping) – very nice! – thanks to Barbara for planning the menu. 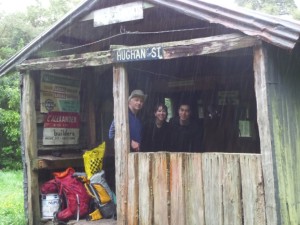 Drizzle set in overnight but the weather was still fairly warm the next morning. The river was around knee-deep on people of average height and the crossing was straight-forward. The drizzle turned to rain so we stopped briefly to have a look at Sayers Hut and its collection of old signs. The path up the hill was steeper than Saturday’s route and there were a few fallen trees to clamber over, but nothing too difficult, just a bit of a slog uphill. By now the bush was pretty wet. When we stopped for food along the way we remained standing. Coming through the goblin forest near the top the going was easier but the downhill leg was muddy and quite slick and there were a few slips and slides. 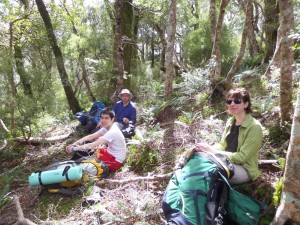 We reached what we thought was the road-end and decided to continue walking to meet the van – and there was nowhere suitable to shelter from the rain. Just as well we did, because we came to a ford the van might not have been able to tackle.

A stop for coffee, cake, and sharing experiences with the Jumbo/Holdsworth group at Carterton’s Wild Oats Cafe made a very pleasant conclusion to our trip.
Richard’s GPS information: