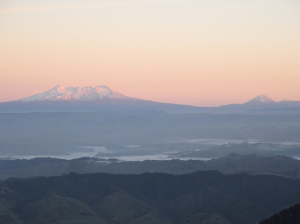 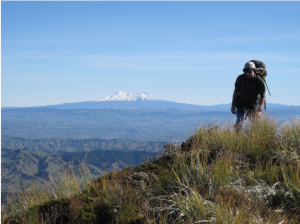 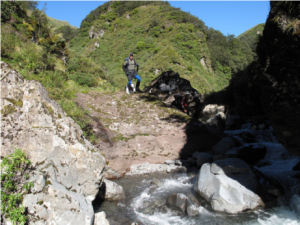 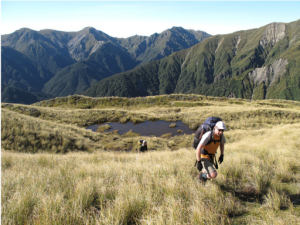 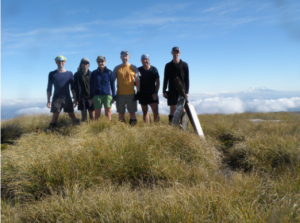 I left the car just after 5:00pm Friday night & headed off to Purity Hut, the first half an hour or so up the farmland is a steep haul but once you get into the bush this is a another good route on to the tops. Daylight saving had just finished, so once in the bush the torch came out pretty quickly, but it was still only 90 minutes from the car park to the hut.

Arriving at Purity the weather was much like my last trip to the Ruahines misty, cool and not looking promising. The forecast however was very different to last time with the promise of a day or two of fine weather. By 8:00pm the mist & clag had cleared outside & there was a beautiful sickle moon and a sky full of stars.

There were two hunters in residence at the hut & although not together they were both planning to set off early the next morning & had set their alarms for 4:00am. I got a text back from Sharron confirming they were still all on schedule & then it was lights out for an early night.

Saturday morning the alarms went off at 4:00am & try as I might getting back to sleep proved difficult, eventually I gave up & pottered around taking a few photo’s as the light dawned on the day & then organizing brews & breakfast etc

The rest of the crew arrived on schedule around 9:30 having slept at the road end, a quick brew & we were off up the hill heading for the Pegs. Wooden Peg duly arrived & Iron Peg followed suit shortly after.

It was a great day with only a very light breeze, perfect conditions for tramping

Mt Ruapehu & Ngarauhoe were looking splendid, even Taranaki glistened in the distance

There had been a good dumping of snow in the last week & there was even a dusting still on the slopes all around us.

Heading south we made good time until we hit the first broken bits on the ridge. There is a broken section prior to the turn off to Pourangaki Hut, but this is really just a warm up to the short section of Pinnacles that follow after this. These sections slowed us up & when we stopped for a snack & another look at the map just prior to Pt 1584, it became obvious that we were probably going to run out of daylight if we continued.

The original plan was to continue to Ohuinga & then turn North and drop to Waterfall Hut via Broken Ridge. This is very doable; it just requires a bit more time than we had that day. Daylight saving or Purity Hut on Friday night would give you the extra time required.

One of the hunters staying in Purity gave me some route advice for Broken Ridge that looked sound from where we were, he said carry on down Broken Ridge & over the pinnacle section until just before the ridge starts to lose height. There is a big slip there that runs all the way down into Tussock creek below, there is a small tussock spur just to the north of the slip which offers good travel down off the ridge until you are happy to traverse south on to the scree slopes if you don’t like the access at the top. That route looked fine from where we were.

Instead we now took a scree slope down into the headwaters of the Kawhatau, this provided good travel, as did the stream bed below & we motored on down eventually reaching Waterfall Hut about 3:45pm.

There were already 3 hunters staying there, though not actually in residence, their gear sort of filled the hut and to be honest the promised flats just down river seemed way more appealing anyway.

We met two of the hunters down river they had been there all week & today was the first day they managed to get out of the hut as the weather had been so bad, their helicopter was coming back for them Sunday so they were trying to make the most of the 24 hours left to them.

We pushed on downriver a little further to the Rangi Stream confluence, where there are some nice spots to pitch a tent or 3 & by 5:00pm we had tents up & were ready to get dinner on. With darkness arriving just after 6:00pm this was perfectly timed.

We were up & away by 7:00am the next morning, the night had been clear & frosty, in fact the tents & some boots & socks had layers of ice on them when we rose. A bit of massaging & in some cases hot water was required before the respective socks & boots were good to go.

The river crossings were chilly, some putting it off as long as possible by staying on the true right, those of us who crossed though knew this to be a very temporary advantage as our route lay up a stream off to the true left, so wet feet were only delayed temporarily.

The recommended route from here was apparently up Trig Creek but the hunter I spoke to said it was a bit overgrown with spaniard etc in the upper reaches & that the next two creeks upriver provided better travel. We took the second creek and this provided great travel up to a fork, where the main stream had a small waterfall. The true left branch also had a bluffy bit so we scrambled up the spur between, this was steep & spaniardy, so we dropped back into the true left branch again for another few minutes but were then again pushed back up on to the spur. This was challenging for perhaps 10 minutes or so getting up this bit, but leatherwood was almost nonexistent & the going was really quite good just steep. We soon broke out on to the short snowgrass & travel was great from here on up.

There are lots of tarns up here & the travel just got better & better.

We popped out up on to the main ridge just 30-40 metres from the pipe on top of Mangaweka, there are remains of the old trig here but it has long gone it seems.

All that remained now was to follow the ridgeline back north to Kawhatau Base. The weather was still good at this stage but we could see cloud spilling in from the west, soon Sawtooth Ridge was soon gone & the cloud continued to get closer & closer occasionally wafting across us, but visibility remained mostly good. Fortunate, as there is a messy piece of ridgeline between Hikurangi & Pt 1625 where the route becomes less than obvious, ok when you can see where you are heading but this would be interesting in the clag as the ground trail disappears here as well.

Once we met the poled route from Mckinnon Hut, Steve & I went on ahead as he had a van key & we knew the other trip would be waiting ready to go.

The track down from the bushedge deserves mention as it is unusual, as you get closer to the river there are some very eroded pieces of ridgeline, with the track on a razorback here in places, there is a big slip on one side leading to the river below, it would only take a few trees to fall to wipe out the top of the ridge altogether here. Then further down the track falls so steeply to the cage that there are dozens of wooden pegs driven into the ground to act as purchase & to help maintain a track. This would be a hell of a haul up from the river.

Arriving at the cage separately, we each decided to take that across the river rather than drop down & regain the height. This is the highest cage I have ever crossed on, I was fortunately too busy turning the handle to spend any time looking down, it’s a very long way down to the river.

I’m not sure that this was the quickest way across in the end, winding yourself across, with no help, is very hard work, I think with no-one else to help out that walking down & back up again might be quicker & probably not as hard as winching yourself across on the cage. I was certainly buggered after doing this.

Arriving out at the road end we were given a lift back down to the Mangakokeke Rd end where my car & the other van awaited. We parted here, each with a bit of work to do to get home. Steve had to get back up to Kawhatau Base, hopefully past the locked gates to collect the others & then return & head back to Wellington, while I was back off up north to Tauranga.

Sharron, Dave, Steve, Ian & Gareth & I all enjoyed a fabulous couple of days in the hills.

It was my fourth club trip to the Ruahines, but this was the first time I actually got to see anything, the other trips up here had all been in the clag.

A fine trip, thanks to all involved, especially Huey.