I didn’t check the weather forecast, I didn’t organize any gear. I didn’t know who was coming, or who their emergency contacts were. I didn’t carry a PLB. Was I an irresponsible trip leader??? No… because this was the 2016 WTMC Christmas beer tramp… a laid back social in the city, walking between a few of Welly’s best craft beer pubs.

I didn’t do much, but I did put some thought into the route. We started at 2.30pm at the Sprig and Fern. I allowed 45mins in each pub, with either 30mins or 15mins for walking in-between pubs depending on the distance. I published the schedule on the forum and the newsletter, and people could turn up when they wanted. I had a few indications of people’s intentions, but I’d already agreed not to wait for people of they were overdue. The sun was shining so we set up in the Sprig and Fern pub garden at a table with some shade. The fitness-essential team turned up here… Myself, Gareth, Richard, Jenny and Stu. The Blonde beer was perfect for the hot weather.

Pub number 2 was the Kelburn Village pub, and our tramping route took us through the rough terrain of the Botanic Gardens…. I was temped to get my map and compass out, but there was a fairly good track to follow. 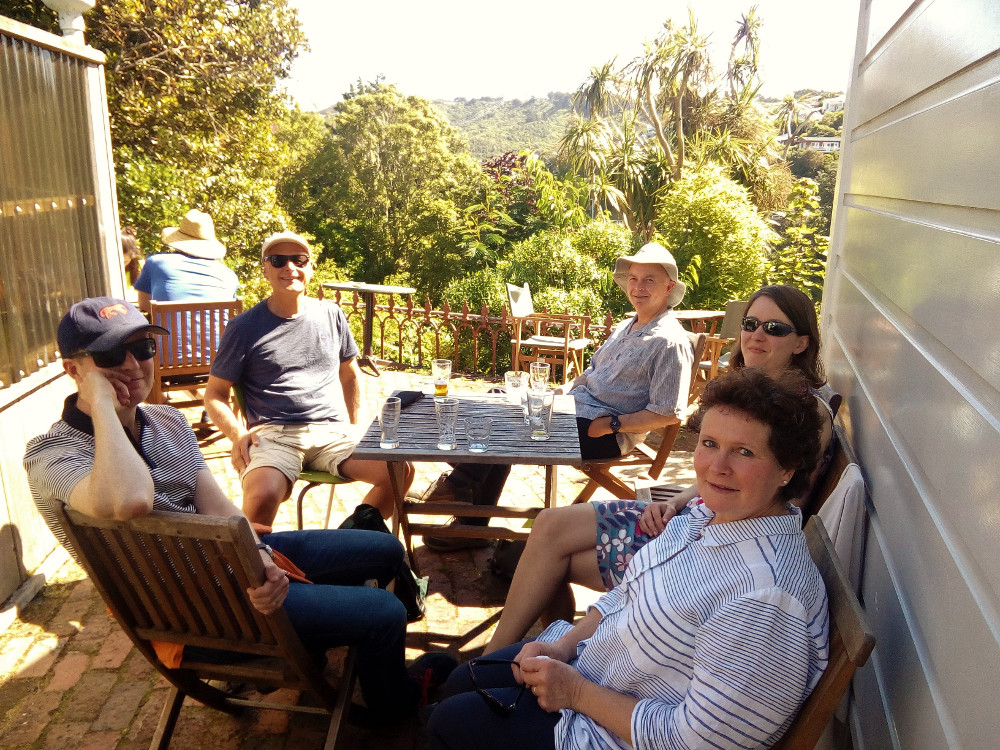 The Kelburn Village Pub has a smaller selection of beer on offer, but we all agreed that the offering was excellent (although a little pricy). Our ‘fitness’ tramper, Paul, joined us here. We found a patch of shade in the pub garden and discussed the different incarnations of the KVP over the years, and the different rental properties we had lived in the surrounding areas.

Our next stop was The Garage Project Pub in Aro Valley. We used the Norway Street Track. Stu commented that the track had been upgraded in recent years. We were amazed when we arrived at the Garage Project by the sudden increase in group size when all the medium trampers joined us: Sharon, Richard, Amanda, Richard, Sean, Simon and Stephanie. Many were a little overwhelmed by the selection of beer on offer at the bar, but I knew exactly what to get – Red Rocks, a personal favorite. 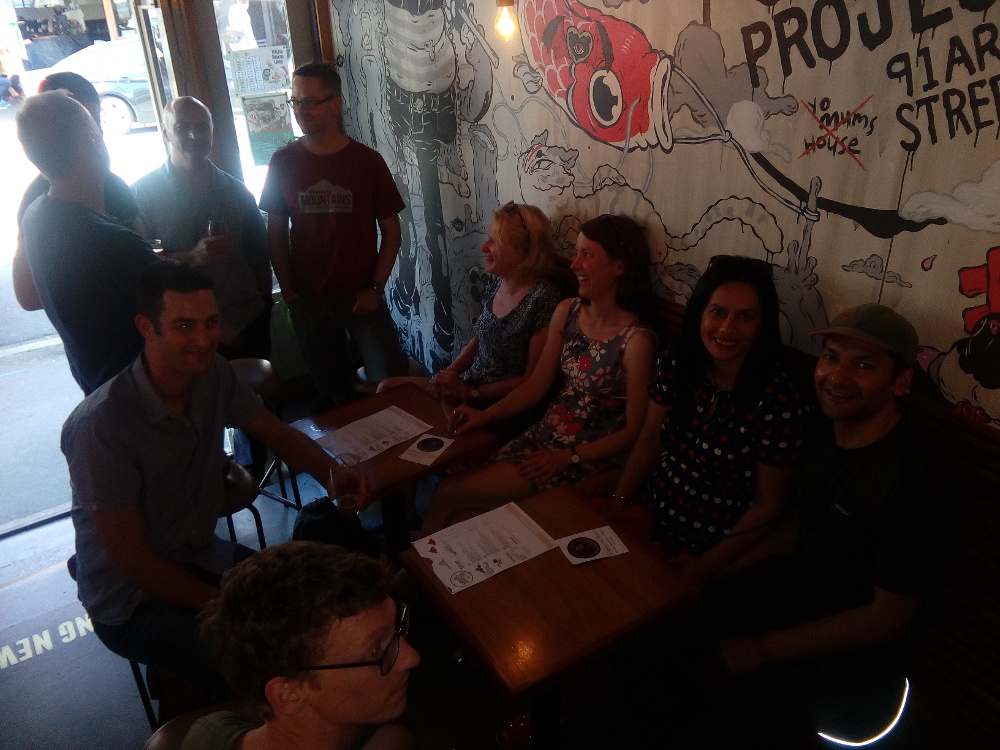 By this point the vast majority of the tramping was behind us, and it was only a short hop from the Aro Valley to our next pub, The Third Eye. We were definitely getting into the ‘front country’ of craft beer tramping, and the pub was busy, so we escaped onto the veranda just as you would in a crowded DOC hut. The beer selection was very nice, and I enjoyed a lovely pint of double red IPA of which I forget the name. We gained our Easy-Medium Tramper, Pete, in The Third Eye.

The final leg of the tramp was to Golding’s dive bar. Someone asked me if, as trip leader, I could do some navigation, to which I replied….”Oh I don’t know…. one of you lead the way”. The group couldn’t agree which was the quickest approach, so we split into two and had a competition to see who would get their first. I chuckled at this terrible manifestation of trip leadership on my part…. But I didn’t particularly care… I figured everyone would turn up at the right place in the end. The lead navigation team managed to nab a good table at Golding’s, so the slower team were pretty grateful to them. We gained our final tramper, Kev, in Golding’s…. I guess he didn’t think he’d have the stamina for a longer tramp. The Garage Project ‘Party and Shit’ was generally agreed to be a top-notch beer and a worthy end to the tastings. We were pretty hungry by this point as we hadn’t carried any emergency food supplies on the route. We ordered pizza, and terrified the poor waitress when she delivered them to our table. I don’t think she’d served such a ravenous group of beer trampers before. I was most impressed with the speed at which Pete finished his Pizza.

Thanks to all the trampers for making this a lovely friendly sociable occasion. I really enjoyed the laid back tramping and beer chat – it was exactly what I hoped it would be. Merry Christmas… and happy summer tramping!