The four of us left the Railway Station on a sunny Friday evening bound for the Pohangina Valley and the Ruahines. The good weather forecasted for the weekend and the free-flowing traffic along SH1 meant spirits were high in anticipation for a good weekend’s tramping even before Maarten announced he would be providing a breakfast of bacon and eggs with plunger coffee for the group as a special treat on the last club trip before Christmas. We stopped in Palmy for a leisurely meal at a Malaysian restaurant followed by an ice cream en route to our destination of the Piripiri Campsite, which we arrived at in time to pitch our tents in the remaining daylight.

The next morning after breakfast we drove a short distance to the start of the Mid Pohangina Hut Track. The four 4WDs parked on the road indicated that the area was popular with hunters and we would meet two separate hunters along the track carrying a deer on their back. From the road the track crossed farmland down a steep farm track to the Pohongina River. The track then went along the river flats before heading higher up in the hills. Good views of the valley were to be had in the many clearings along the way. The track was quite undulating for a while, as it dropped in and out of the many side streams into the river, before flattening out and then dropping down to the river near Mid Pohangina hut. We then crossed over the river and a final short ascent to get over a spur before dropping down to the hut for lunch. 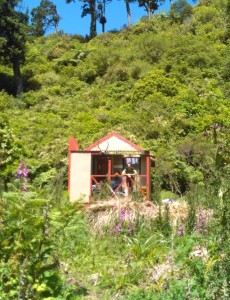 After visiting Mid Pohangina hut for lunch we set off up the river toward Ngamoko hut.

The approximately 3km of travel up the river took us about 2.5 hours. Frequent river crossings were required but the majority of the walk was along river banks. Some trickier sections required clambering over boulders and walking waist deep through the river. 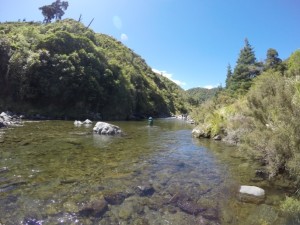 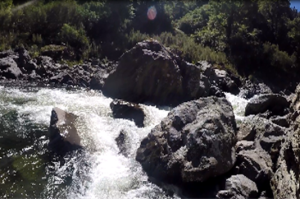 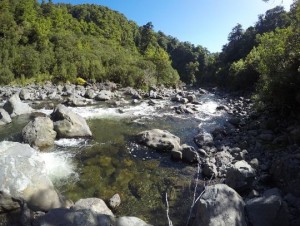 About 1 km downstream of Ngamoko hut we spotted 5 whio (blue duck) in the river.

We arrived at Ngamoko hut around 5:30pm. Ngamoko is a nice, well maintained 6 bed hut. 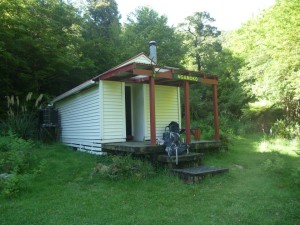 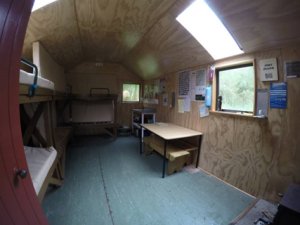 On Sunday, we had breakfast and were ready to set off from Ngamoko Hut just before 8am. It was very misty and cloudy, quite a change from yesterday, but I was hoping it would clear up so we could see the great views from Ngamoko Range above.

The track started behind the hut, past the toilet. It was a little bit vague and overgrown but it was definitely the track going up. It climbs very steeply straight away and we warmed up very quickly. I knew about the 700m climb from the maps but it’s another thing when I could feel it in my legs and shortness of breath. I struggled but luckily it was the start of the day and I had a great group that didn’t leave me behind. The track became less steep and there were a few fallen trees to walk around and climb over along the way. It took 45 minutes to get halfway in elevation and then the track continues on back to steeper terrain. For a short bit, there was a decent downhill. While I was happy for the break, it also meant that we’ll have to regain it back up. There was an open area and we managed to have a good view of the surrounding hills shrouded by mist. The forest gradually changed to leatherwood, a sign that we must be getting close to the tops! Then, we could see the silhouette of the high point and ahead was the final orange triangle marker.

At the tops, there were sparsely spaced poles indicating the route. Maarten had a good eye in following them, especially in the foggy clouds. We decided to sidle around the pt 1350 since there were no views anyway and it was also quite windy. I was very thankful for that because I know I’m done with the uphill. We walked through the tussocks, very spongy ground and some leatherwood. To me, it was a very welcome change from the tiring uphill despite all the scratched up knees and arms.

We walked the ridge briskly with the wind blowing harshly on us. We descended towards more leatherwood, at one side we saw a small tarn. We were on a decent ground trail so we continued on it but it led to a forest of wild leatherwood. We went through a bit to check to see if it was just really unmaintained and overgrown but there wasn’t any sign of where to go and it really didn’t seem worth bashing through. We turned back around and Michael suggested we go down the ridiculously steep trail (it was almost vertical!) to the tarn. There we found a decent track going downhill.

It was great to descend down, sheltered from the wind and not bush-bashing slowly through leatherwood. The track was overgrown but had ground trail to follow for the most part. There were some areas where we had to stop and look for where to go. When the saddle was visible, toward pt 1045, Maarten had tried telling me that we were going to go uphill to that point and behind the ridge to get to the hut. While I enjoyed and could continue happily going downhill and even going through bushes for quite a while longer, it would take everything out of me to go uphill then. Luckily, he saw sense or maybe he was just riling me up, we decided to go down from the saddle like what I actually thought was the original plan.

Veering off from the unmaintained track from the saddle, we climbed over, crawled under and swung around some fallen trees to a chute which is the start of a tributary to the Piripiri river. It was muddy and very steep downhill and you could see a trickle of water turning into a small stream as  we descended. We got down in no time, and soon we were out of the mist and into sunshine. Not having done much off-track myself, that was pretty fun!!

As Piripiri hut is about 100m above the stream, and we did not want to walk any unnecessary up hill, Maarten and Michael got their GPS’ out to make sure we were at the right elevation to traverse to the hut. We sidled the hill towards the direction of the Hut, going across some slips but mostly just through some light forest. I was knackered at this point and very keen to get to the hut and have lunch. At around 1pm, we went through bit of a sloped clearing and there tucked away in the bush, we found the tiny Piripiri Hut. 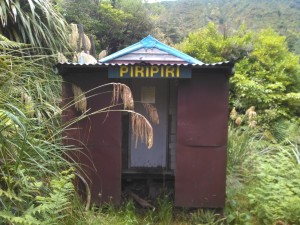 A steep 100m scramble down the hill from Piririri Hut got us down to the Piripiri stream. This stream flows all the way to the Pohangina River which is our destination. The stream at the hut is small but as more side streams enter the main river, it slowly grows to a medium size.

I had some information from the PNTC that said this river section takes 4 hours. This surprised me as it didn’t look that far, but you soon realise that you are constantly in the river because there are not many places where you can walk on the river bank. This, small waterfalls,  slippery rocks and sandstone slips makes travel in this sporty river slow going.

Once we reached the Pohangina River it felt as if we were nearly back. It might be 1.5 kms, but this section is on farm land and is fast going. The last little bit is a steep up-hill that takes you back to the road. I did offer to carry others packs up this hill, but as 99.9% of the trip was behind us, it would not feel complete if you didn’t carry your pack all the way to the van!

The conclusion from all of us was that it was a hard but very satisfying trip.

As a nice conclusion to the trip, our leader shouted us all ice creams on the way home.