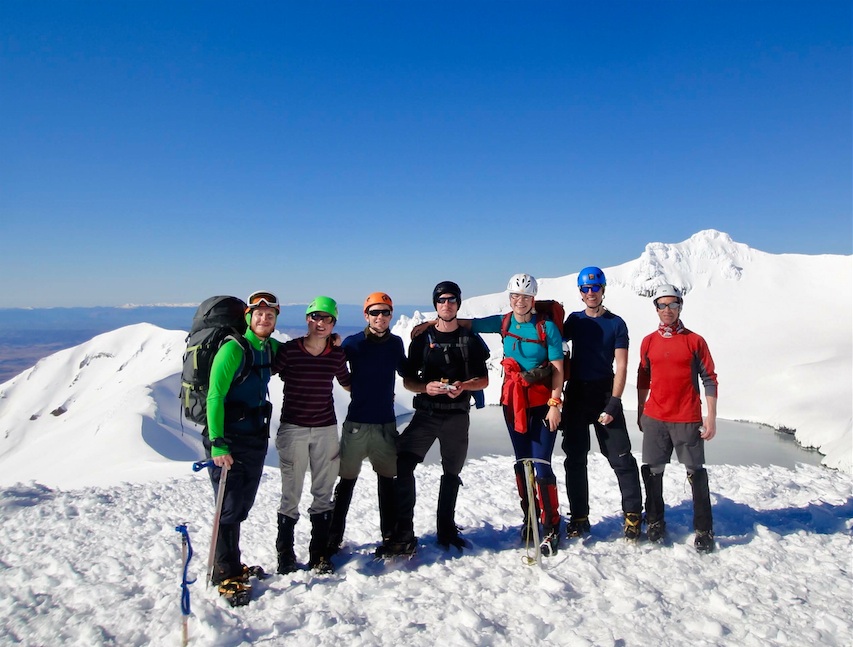 A pillow, curtains, carpet, even a hot shower. I like this style of alpine climbing! Staying at the lodge on Whakapapa is a great way to soften the blow of an alpine start. Our crew were up at 5am and out the door by 6am on Saturday morning, and we enjoyed the soft glow of sunrise over Ngauruhoe while puffing our way up the skier free slopes. We made it to the crater just after 9am. We had our sights set on the Ruapehu summits and snow conditions were looking good.

Our group of eight each chose one summit to lead, and Jess capably knocked off summit number one – Dome. As we followed her up we looked across at summit two – Paretetaitonga was going to involve a bit more sweat! Erik lead us up ‘Pare’ and the increadible vista down to Ohakune and beyond was well worth the effort. Back down and around took us to the start of the ridge towards Tahurangi. Henry surged ahead to take us up point 2757.

We continued on towards Tahurangi, but soon realised the conditions were a little challenging. A long stretch of front-point traversing with two axes was ahead, and we all agreed this was too much to ask of an Alp 1 group. So we turned back around and retraced our steps to the edge of the crater lake. Tereza had Pyramid Peak in her sights, and set off at a rapid pace to edge around a fantastic display of ice formations and on up to the summit.

We took a break to chat with some fellow climbers and take in the view across a steaming Crater Lake. Then on to Cathedral Rocks, which was Mike’s summit for the day. Another spectacular view on a bluebird day – right down to Tukino and the Desert Road. Things were heating up by now, and the ice formations steadily dripped as we made our way down to Summit Plateau. We baked in the heat as we walked across to the western end of the final ridge climb up to Tukino and Te Heu Heu. The ridge seemed to climb forever as the group slowly arrived at Tukino (my summit for the day) and on to Te Heu Heu (George’s choice). Now that Tahurangi was off the list we had time for a much-deserved second lunch.

Back down the ridge and over to Stuart’s pick and the final summit – Glacier Knob. Eight peaks, eight group members, eight smiling faces. An awesome day out topped off by a great evening in the lodge trading stories with the other guests and eating a delicious meal.

Sunday’s weather was looking pretty good, so we headed out after breakfast up Broken Leg Gully. We shared out the gear we had and split into pairs to pitch up a slope towards Great Pinnacle’s northen ridge. For many this was their first time pitching and using ropes on snow. There was space for the four pairs to pitch alongside each other which made for a great banter. The ridge-line to the summit was a little more challenging than we were expecting. We encountered some icier conditions on the western side of the ridge that required careful concentration and we all breathed a little easier when we made it back down to the saddle. Time for a late lunch! After re-grouping Henry lead us north down the ridge and on to a great descent slope back to the start of Broken leg Gully.

Then, chairlifts. Ahh the total luxury of watching the slopes fall away beneath you from the comfort of a plush leather seat in the sky after a hard two days climbings. Bliss! Back to the lodge for a shower, pack up and clean up. Then we hit the road leaving the maunga in our rear view mirror. Time to plan the next trip.