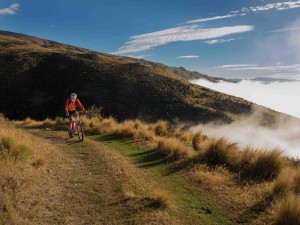 Toward the end of summer in past years Paul and I have always tried to fit in a multi-day MTB’ing trip—but this time we planned to change that idea and try a number of single-day rides instead. This way we hoped to be able to go further and faster each day. Since neither of us had been into the high ranges of Central Otago on our bikes that seemed like the place to go this autumn.

We met at Queenstown airport together with our dismantled bikes in their Air NZ complying cardboard boxes, jammed everything into our rental car and headed to the home of Paul’s friends in Ranfurly where we were met with some real ‘southern hospitality.’ 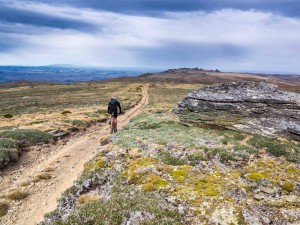 Our first day was to be a relatively easy one to get to know the country and see what we were in for. So we headed up the East Branch of the Manuherikia River in the Oteake Conservation Park, climbed the 1,000 m switchback 4WD track to Little Omarama Saddle and stopped for the view. What an amazing area! Open tops stretched every which way seemingly to the horizon. The sky was huge. There certainly was no shortage of countryside for us to play in. We bumped our way down to Omarama Saddle on some of the roughest and sharpest scree either of us had ever ridden; then an amazing 800 m zig-zag descent to the West Branch along an old vehicle track that crossed the river 25 times and we were back to our car. Fifty kilometres, 1,300 m total climbing and graded 4 out of a maximum 5 in our guide book this was a great introduction and all that we had hoped for and more. 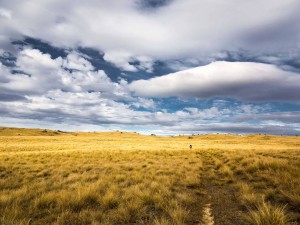 Paul’s next choice was the Rock and Pillar Range. This ride was to be a good bit longer than the first at 75 km and more than 1,900 m climbing, so we started out early the next morning. After the first long climb up to Summit Rock at about 1,500 m we had some of the most amazing riding possible along a 4WD track that weaved along the ridge between strangely weathered tors and with views in all directions down to the plains below, all under a dramatic leaden sky. It was exhilarating stuff. Then a long fast descent to the Dunstan Road and on to a large lake dammed by early farmers for irrigation. We had a late lunch here and chatted to some friendly local kayakers about the fascinating history of the area.

We then re-crossed the Rock and Pillar Range at its lower southern end riding in the tussock following an indistinct overgrown vehicle track. We both agreed this was outback MTB’ing at its very best. Eventually we came to the big downhill back towards Middlemarch. At the top there was some of the roughest most eroded and difficult riding we had met, and some short sections we had to walk. Then it became easier and we made good time to the boundary between the conservation area and the farmer’s paddocks. Strangely DOC had not marked a route through the private property so we just took what looked the least damaging way through the pastures and crops to the main road hoping not to hear any rifle warning shots. Here it was a short highway ride back to the car. What a wonderful day out it had been—certainly some of the best riding either of us could remember. 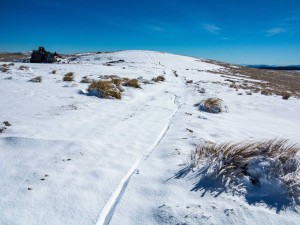 By now we were ready for the ‘big one’. We had chosen the Oteake Conservation Park again but this time a loop around the aptly named Mt Buster starting in the Hawkdun Range before some long tops travel leading to the Ida Range then a final big descent towards Naseby. This was over 60 km with 2,600 m climbing, graded 4+ and in the guide described as ‘the best and toughest of Otago’s mountain bike rides’. And just to make it more interesting for us it had snowed overnight and there was a good sprinkling along the tops when we started out from the Maniototo Valley.

The first climb was a killer—over 1,000 m on a very steep and very rough 4WD track and then quite deep snow towards the top. But once up there it was absolutely fabulous riding the track in the snow under a clear blue sky with our planned route stretching out as far as we could see along the golden tussock-covered ridges, and with the highest peaks of Mt Cook National Park in the hazy distance. 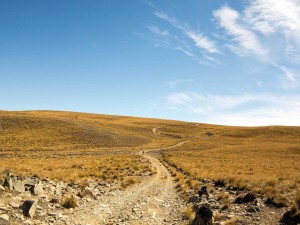 The remainder of the day passed with some of the wildest bike riding you could dream of—whatever was possible it seemed we had it.  Grunty uphills, ridiculously steep downhills, easy gradual downhills many kilometres long, easy surface, almost unrideable surface, axle-deep river crossings, past derelict old musterers’ huts, past the Kyeburn Diggings where 100 years ago miners living and working at 1,300 m sluiced away whole hillsides in search of the elusive seams that were the source of the alluvial gold. And it all seemed to go on endlessly. After one very long, very fast downhill through the snowgrass on the plateau with rolling countryside extending forever and a huge blue sky overhead we stopped for breath and declared that ‘that was outrageous’. And it really was.

Finally many hours later there was the grand finale—a furious descent down a 900 m drop on a farmer’s old track to Naseby where our kind friends had left a car for us to save the 45 km road ride back to the start. We were stuffed but what a hoot! We both agreed that it surely did deserve the title of Otago’s best and toughest MTB ride. 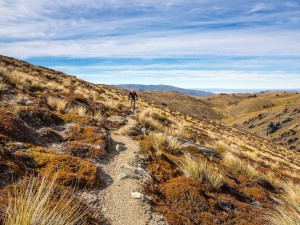 Next day we left our wonderful hosts and headed to Cromwell where we did the usual touristy things like sitting in the sunshine outside the bakery eating lots of sticky buns and wandering around the old town. Our final ride the next day was to be the Cardrona-Roaring Meg Pack Track—a Grade 4+ ride in the Pisa Conservation Area.

We had been warned to expect a few punctures on this trip—the place is infested with Spaniard grass plants (growing quite naturally of course) which seem designed by nature especially to inflict miniscule pinpricks in MTB tyres and consequently cause lots of slow punctures with holes so tiny they can’t be found without water to trace them (and up high in Central Otago there isn’t much water). Paul had cleverly filled his tubeless tyres with self-sealing foam but my bike rims were not suitable for this so I just carried lots of spare tubes—seven for the day seemed to be enough surely.

We had the usual long drag up to the tops but again there was the usual amazing views and endless riding ahead. The first half of the day went well—easy 4WD and some nice single track took us towards Meg Hut and the old gold diggings. It was pleasant fun riding. I had a couple of punctures but these were expected. After lunch we had a difficult 2 km section down a rocky stream gorge that was absolutely impossible for us to ride—and it seemed a long awkward bike carry. Then things started to go a bit awry. I had three punctures in quick succession and just as we got to the best single track of the day down the Roaring Meg gorge I got another. We now had two spare tubes between us and a long way still to go. I punctured again and Paul offered me a tube—but the valve was faulty and it wouldn’t inflate. So I used my last one. Things were not looking good. 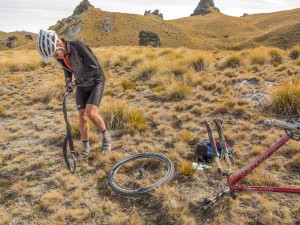 Sure enough a bit later I punctured again—this was ridiculous. We had checked, rechecked and checked again that the rims and the inside of the tyres had nothing there to puncture tube after tube—it seemed it really was the baby Spaniards causing the problems and they  certainly were viciously tough and sharp and impossible to avoid.

The only sensible option now was for Paul to go ahead and finish the ride, carry on along the 30 km road ride and get the car and come back for me. So I had about 3 hours of riding ahead to the highway—and a flat front tyre. The first bit of single track was just too good to miss so I rode it anyway. I already had a couple of broken spokes in the front wheel and it was a bit buckled so trashing it completely didn’t seem to matter anyway.

Sure enough though I soon punctured the rear tyre. Great! I pushed and carried my bike down the sidle track high above Roaring Meg which was too narrow and dangerous to ride on flat tyres until I reached the access road. From here to the highway where I would meet Paul was still about 10 km mostly down a steep gravel track and it was getting late. So I rode this on two flat tyres arriving at the gate exactly as Paul arrived in the car. An unusual MTB’ing day to say the least but certainly a memorable one to finish with. 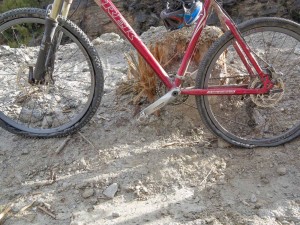 Next day we left Queenstown on our separate ways home to Rotorua and Wellington. But what a fabulous trip it had been—without a doubt by far the best MTB’ing either of us had ever done. Now a good few $s later my bike has two new wheels and tyres, new rear brake, chain, cluster and front small ring and we are thinking of next year’s trip. Can’t wait.