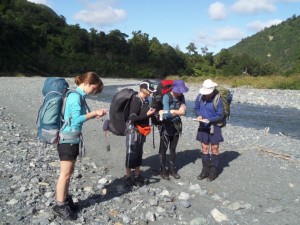 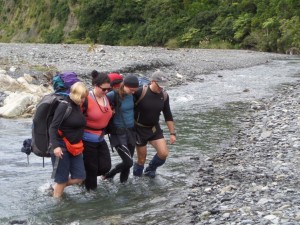 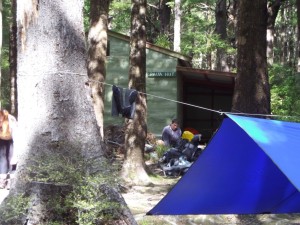 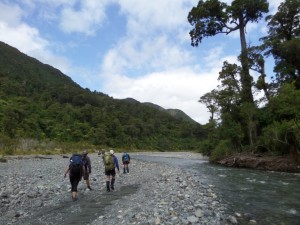 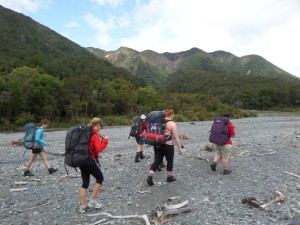 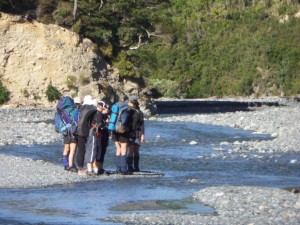 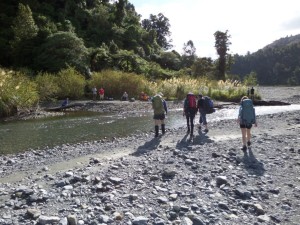 Most of our group met up at Wellington Railway Station on Saturday morning, while a few drove straight to the park. Before we left we checked how much our packs weighed on a portable scale. I was looking forward to trying out my new boots, and hoping they would prove comfortable. The weather was delightfully warm and sunny.

At the Catchpool Valley carpark we split up into four groups led by Amanda, Richard H, Richard L, and Kevin, and set off at intervals. First we learned about how to read our maps, tracing our route on the map and noticing that not all features (such as bridges) will necessarily appear on the map. We also had an introduction to using our compasses. The track was very easy and we met quite a few dog-walkers and family groups along the way.

After a lunch break when we reached the Orongorongo River, Amanda explained all about how (and whether) to tackle river crossings. We practiced crossing the river, which was up to knee deep in places, in threes and fours. I found the metal frame of my borrowed ‘vintage’ pack (circa 1975) made it a little difficult for the others to ‘link up’ around me. Several practice crossings later we headed for Paua Hut. The walk down the valley gave us many river-crossing opportunities. Between crossings we had more compass practice and enjoyed the beautiful valley views.

At Paua Hut we learned how to put up the flys that several of us planned to sleep under that night. Kevin strung up a rather interesting-looking hammock with its own fly. Around this time we discovered that the hut door had closed, locking the key inside. We could all have slept out, though cooking might have been trickier, and I’m not sure whether any packs had already been stowed inside, but we felt pretty keen to get that door open. A small group circled the hut several times, pondering on a way in. Eventually, a crafty solution was devised and soon we had the door open again.

We were then put into three groups and given instructions for a  treasure hunt using our compasses. My group located the treasure (jaffas!) in about 10 minutes or so, but the other groups were sent further afield. After the hunt we reassembled and Amanda led a discussion about hypothermia and other tramping-related matters, including the recent case of a successful search and rescue operation at Arthur’s Pass. The rescue had been reported in greater detail than usual, and we considered the trampers’ poor decisions and their good ones.

Dinner was satay soba noodles with vegetables, chorizo optional. Later we enjoyed some of the best chocolate brownies I’ve had, and sat outside talking while darkness fell. Moreporks, and apparently kiwi also, could be heard in the valley.

Around half the group chose to stay in the hut with the rest spending the night outside. The night was pleasantly warm, with only the lightest breeze passing under the flys and I decided I wanted to experience sleeping outside for the first time. It was undoubtedly a beautiful night, but unfortunately a fairly sleepless one for me. Sno-foam is not the most comfortable sleeping surface, but I knew that, and so I didn’t really mind. I felt like I was awake all night but since Kevin dismantled his hammock, which was about 2 metres from me, without me noticing, obviously I did get some sleep.

After breakfast we packed up, tidied and locked the hut, and walked down to the river for the return journey. Richard H went over compass use again for those who were keen to understand navigation better. On the way back to the carpark we met Kevin, who’d walked out early to acquire fresh supplies to repair our crafty entrance at Paua Hut.

Many thanks to Amanda, Richard L, Richard H, and Kevin for their very helpful introduction to bushcraft, and a very enjoyable weekend. As we returned to Wellington, future tramping trips were discussed and equipment purchases and borrowings planned. Thankfully, my boots proved very comfortable – so much so that my regular street boots felt distinctly odd. Definitely keen for more!