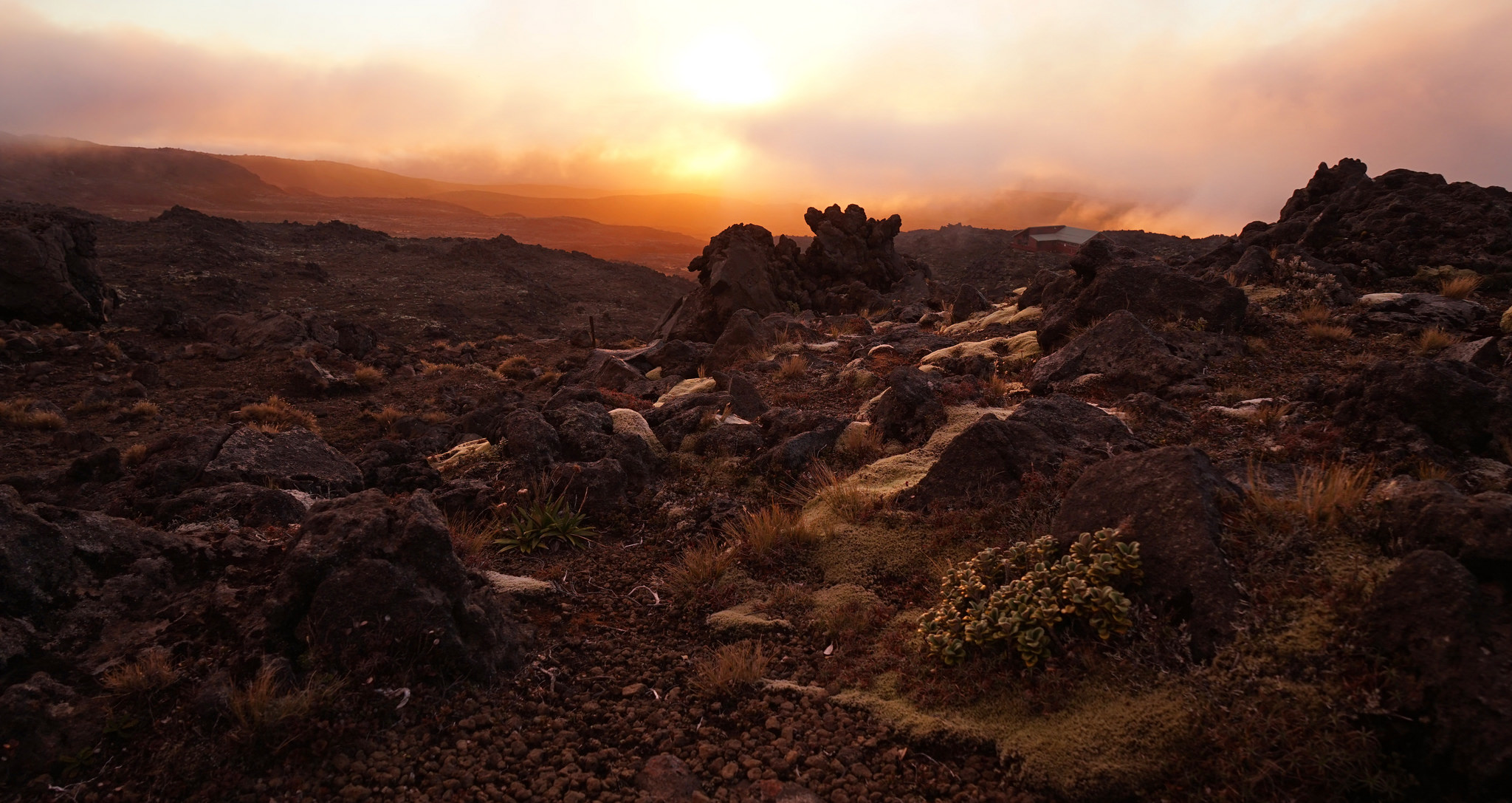 I signed up to this trip with very unalturistic motives – I was enormously curious to see the “lodge” that everyone at the club keeps talking about. In my head I pictured one of the huts on the great walks – which most trampers consider the height of luxury – and have flush toilets, lights and gas in season. So I was very puzzled when I was told I did not have to bring food to contribute to the evening meal, and that I even needed a pillow case for a pillow! I clicked the link in the email to the WTMC’s web page about the lodge. Lazy as I am I did not read it, but skimmed over the photos. The lodge had a couch! I was even more intrigued – what kind of lodge was this?

We met at the Railway Station at 5.30pm, and Mike and Andrew soon rolled up in a flash rental van. I felt a pang of anxiety when I handed my bag to Andrew to stack in the back of the van – it was so light! I must’ve forgotten something important. We piled into the van, and Andrew made escape impossible by putting a giant wooden ladder in the aisle. After some fidgeting we had the ladder secured in place and made a start. However the van then flashed some angry lights at Mike, requiring us to pull into a petrol station. The van, close to other vans and petrol, calmed down and stopped flashing lights at us. After soothing the van, we got on the road and got to Levin in good time. Here we stopped for some takeaways, and I felt another pang of anxiety that I hadn’t brought enough supplies – primarily that I didn’t have my kit for making a cup of tea when we arrived. Mike assured me that there would be a tea bag and some sugar at the lodge for a cup of tea but then dashed off to get coffee from Countdown. Stranger still – the lodge provides tea bags but not coffee? Despite my intrigue, the rest of the journey was surprisingly quick, possibly because we were treated to some 2015 classics through the bluetooth from Preeti’s phone.

It was very cold and dark when we finally piled out into the carpark by the lodge, so I was glad I had put my fleece and head torch on before we left Wellington. We all took a bit of wood and marched like dwarves up to the lodge. This was where I was in for a surprise – the lodge was not what I had thought a lodge would be – it was a house! It had everything that a house would have – from proper mattresses and carpet, to showers and flushing toilets, to a complete kitchen. I was over the moon to see an abundance of tea bags – I had two cups before bedtime. Sue and Jacquie were waiting up to welcome us with a huge carrot cake. Even though we worked hard all weekend, I don’t believe we made it through that carrot cake.

We had a leisurely start on Saturday, with Baz providing us with a cooked breakfast. We soon got into the cleaning, and made great progress. Wiley as I am I managed to avoid the worst jobs – Norm cleaned behind the grill and Mark cleaned the barbeque. I heroically wiped some walls. By mid-afternoon we felt it was going well enough to have a break. Some of us continued cleaning but I stole off with Jacquie, Norm and Cindy to have a ride on the chairlift. Unfortunately it was closed (unless you were Bill English) so we had to make do with a walk to Mead’s wall. The afternoon was fine and it provided me with the opportunity to look down upon the whole lodge village – so many lodges! Back at our lodge, Rob and Georgie treated us to a dinner of spaghetti bolognese (both vegetarian and meat versions) and fejoa crumble for dessert. I’m not sure what happened after dinner as I fell into a food coma.

Another leisurely start (for some of us – at least two people summited Ruapehu that morning!) was had on Sunday. After another cooked breakfast and doing some final cleaning jobs, a group of us decided to actually do some tramping on this trip, and walked from the Lodge deck to Mangahuia car park via Whakapapiti Hut. This was a very nice walk, with some good scenery changes, however it is a bit boggy in places so I recommend gaiters. Mike had expressed some anxiety about my ability to finish the walk with the same amount of people I started with, but I not only achieved this, I picked up a Sergey along the way so arrived back with six instead of five! Mike was patiently waiting for us at the campsite, and was able to confirm that the other aim of the trip, the building of a new bunk, was achieved. Our combined triumphs were celebrated with a hot drink and something to eat at the Brown Sugar café in Taihape on the way home.

This was a great trip – I finally got to see the lodge in all its well-equipped glory! But I also got to meet a whole new bunch of nice people outside of the “easy-medium” grade group I am accustomed to. A big thank you is owed to Sue and Mike, our lodge parents for the weekend, for organizing and running such a great trip!