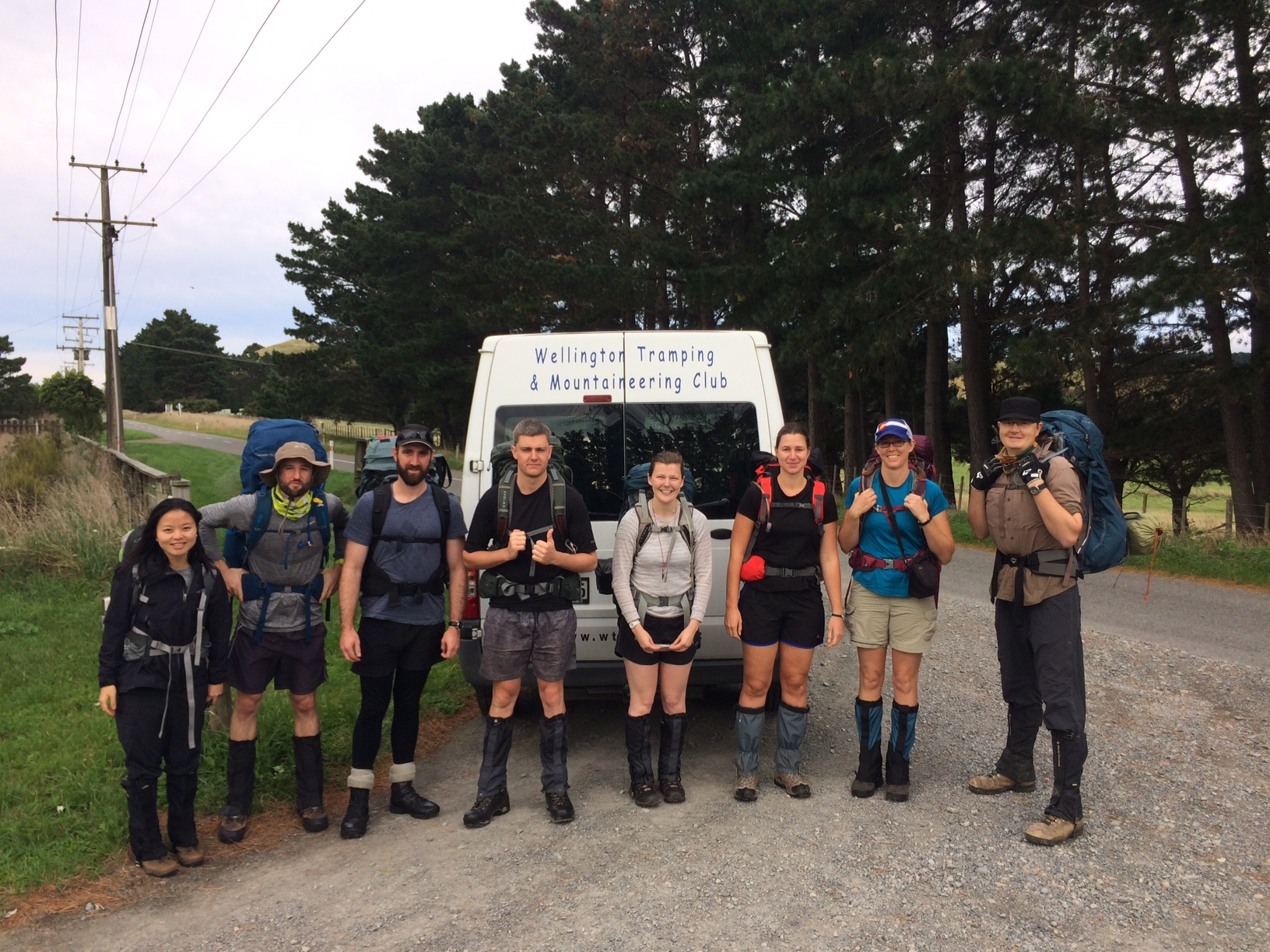 I was not brimming with confidence about leading this trip as I had not done a medium trip before, let alone led one! However I not only survived the trip, I actually enjoyed it, which I put down to the awesome group I was walking with.

We were picked up by our chauffer for the weekend – Maarten Ruiter – at 8am from the Railway Station. Maarten drover us over the Rimutaka Ranges and south from Featherston to Onoke Road end. We didn’t actually go quite to the carpark, we stopped a wee bit after the carpark so we could hop the farmer’s fence and get onto the stopbank where the track starts without having to get our feet wet in the very first ditch. This was the first trap for young players which we thankfully avoided thanks to Maarten’s wisdom. There were many more on this trip.

We got onto the track at about 9.45am. Once on the stop bank the track heads straight for the hills. My advice would be to try and keep the fence to the left of you when you are walking. I hopped a fence once or twice trying to find the way only to get myself lost while the group toddled along happily. There are a couple of spots where an orange marker would be handy along here.

After about half an hour we came to a big orange marker at the start of the forest. The track from here climbs gently, and is a pleasant half hour or so of walking until you come to an intersection. Take the right-hand fork. Although we didn’t take the left hand fork, from the looks of the map it just peters out after a while. From the intersection the track begins to sidle. At some points it seems like you could only fit one foot width on the track. I slipped a little at one point and the group had to wait for me while I fossicked around in the bush for my dropped eftpos card!

We lost the track a bit just before the first river crossing so did a bit of sliding down to it. Beside the next river crossing we found a nice flat spot so stopped for lunch and a brew. This was around 12.15pm. One of the most interesting parts of tramping is seeing what people bring for lunch. I marvelled at Richard’s sophisticated sandwich which included hummus, brie and homegrown baby tomatoes.

After this second river crossing you start following a tributary of the river straight up into the hill. The track is initially quite open and flat, and somewhat easy to lose. Someone has stuck an animal skull in a tree in the middle of this openness. If you see this skull, make sure you turn left to meet up with the river tributary.

For what seemed like a very long time we were literally climbing in the river, criss-crossing from side to side and scrambling up steep muddy banks until we came to a majestic waterfall of mud. I couldn’t see what was happening ahead of me (I was in my customary back end position) but I could hear yells and grunts as people tried to scramble up said muddy waterfall. I felt an ominous foreboding as my turn came to ascend this Everest of mud. Aaron came to my rescue by getting me to take my pack off, and he pulled it up, while I figured out how to climb the mud. Some kind soul had tied a piece of string to a tree and left it dangling over the edge of the mud waterfall but I was suspicious of its ability to take all of my weight. In the end I wriggled up like a fat caterpillar, managing to bathe myself completely (face and all) in a mix which would rival a Rotorua mud face mask. After this scramble we made it to the top of a small saddle and had a steepish sidling descent down to Wharepapa Hut.

We arrived at Wharepapa Hut at 2.45pm, much later than expected (which I take full responsibility for). We were faced with a dilemma – push on to get some of the hill climb out of the way, or stay down by the hut where we had access to water and shelter. After some mulling over the group decided to stay put. We pitched our tents by the hut, in whatever flat space we could find. There is not a lot of flat space around Wharepapa Hut, and if it is flat, there is bound to be some stinging nettle on it. I think we all managed to touch some Stinging nettle throughout the trip.

As it turns out we had a lovely evening. We cooked the pesto pasta for dinner and everyone was very pleased with it. We then discussed leaving early in the morning, and pondered whether our smart phones would prove themselves smart and update for daylight savings (they did, as it turns out). We then went and sat by the river. We lit a fire in an already used firepit (which Ross 1 had dug out and gathered firewood for) and gazed at the stars while eating cake. We turned in about 9pm. I was reasonably comfy and could not feel the patch of stinging nettle underneath me. But I was amazed by the sounds of the wind whistling through the valley. At times it sounded like thunder! I also managed to convince myself that any small rustle of grass or leaves nearby was a possum come to steal my boots.

We got up at 6am (new time) and packed ourselves up for a 7.25am start. It was at this point, trying to be helpful, that I washed up some dishes in the river by putting small rocks in them, and managing to take the finish of Richard’s pot (sorry Richard) – another trap for young players. We were straight down the river and up onto the track no problems. Richard, Ross 2, Aaron and Anne had scouted the way to the track the afternoon before because we knew it would be hard to find. We followed the river for about five minutes and then abruptly started into the forest before stumbling across the track.

Then followed a climb to rival Frodo and Sam’s ascent of ‘the stair’ into Minas Morgul. It literally just goes up and up and up. I thought from studying the map the night before hand that I might be able to discern three stages of the climb: steep, extreme steep, and slightly less extreme steep. But it just blurred into one big steep. We stopped for morning tea in a hollow below independence day or point 776 at about 10am. We had a 20 minute break here where everyone compared soup flavours. We then continued on to point 902, the summit of Papatahi. At times it felt like you were walking on a knife edge. However we got there just on 11.15am. There was time for a quick selfie and some ‘top deck on top’ provided by Ross 2 before we scuttled down the other side to escape the strong winds.

This side is very exposed and we were blown about for the first half hour or so of the descent. I was scared we might lose a group member to a slip on either side, but we managed to scuttle past these unscathed. The track became quite gravely and slippery after this. I held up the group big time as my legs were starting to feel like jelly and I had lost confidence so had to go down on my bum. We eventually popped out by the river at about 1.30pm – after a good two hours of descending. I was so relieved to be on stable ground! We stopped for some extra lunch and more comparing of soup before packing up and taking off down to meet the main Orongorongo River.

My timekeeping here went out the window a bit. We joined up with Orongorongo at about 2pm, then wandered down to Papatahi Hut, arriving at 2.30pm. From there we stuck to the River until we got to the Big Bend track another half hour later. From there we zoomed along the track, arriving at the arch bridge where all tracks meet about an hour and a half later. I was pooped by this point and needed to have a sit down on that wonderful bench at the top of the short climb up from the arch bridge. I’ve walked the Orongoronga Track to the Catchpool Carkpark in an hour before, but it took me an hour and three quarters this time because tiredness was kicking in. Maarten was waiting for us in the Catchpool carpark at 5.45pm. I was so pleased to be finished. We had spent 10 hours on our feet that day – the longest time I have spent walking ever.

Our times between waypoints were as follows:

I am so appreciative of the group that I had. They were all medium trampers, and could have quite easily chopped an hour off of our time on the Saturday, and at least two off of Sunday, but they stuck with their floundering leader throughout. I am quite happy to return to my easy-medium grade, but still very pleased to have done this crossing. Also a big thank you to Maarten our chaffeur, without whom the tramp would not have been possible!