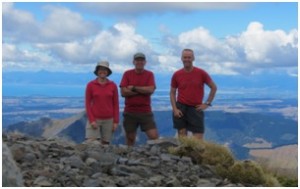 The extended Waitangi Day weekend afforded the perfect opportunity for WTMC members to take in the delights of the top of the South. So along with a ‘fit’ group tackling the Leslie-Karamea track and others defying gravity in the Nelson Lakes area, a select group of three ‘easy-mediums’ took on the less strenuous, less technical, but certainly no less beautiful Mt Arthur Tableland area of Kahurangi National Park.

There was a slightly special aspect, as it was pretty much a reunion tramp for three relative newbie’s on Dmitry’s Travers-Sabine group the previous Easter. That was a great tramp, so the trip to the Tableland area was much anticipated. And for Mike Travers, it was his first experience as a party leader. 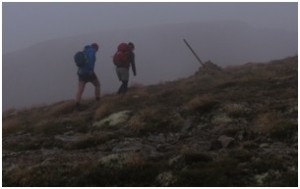 Day 1 went pretty much to plan, leaving the van parked safely (well, that’s what we thought) at the Flora saddle car park mid morning. The weather forecast for the weekend was superb (well, that’s what we thought). We took the Flora Valley route through to Salisbury at a leisurely easy-medium pace, taking in the amazing rock shelters for scroggin and lunch breaks. The fit group decided to take the more direct route up and over Gordon’s Pyramid – well, it looked direct on the map. They had to get all the way to Karamea Bend on Day 1, so a quick getaway was important. We were therefore a bit surprised (or smug?) when already settling in at Salisbury, the fit group arrived.  ome on guys, sharpen up – you’re supposed to be the fit ones! As we were to find out on day 3, it is actually a bit of a grunt over Gordon’s Pyramid, so either a masochistic tendency had kicked in or there was a slight navigational miscalculation.Because of pick-up and travel logistics, the original plan of tramping into Salisbury Lodge on day 1, heading down to Karamea Bend on day 2, and then up over Baton Saddle to Flannagans Hut on day 3 before heading out the Baton River valley on day 4 had to be discarded for an “in and out, and shake it all about” type tramp using Salisbury Lodge as the main base. So that’s what happened.

Because, we hadn’t stretched ourselves, we took a there and back diversion off to check out the Leslie-Karamea track as far as Spludgeons shelter – cool name for a cool shelter from the retro-basic chic school. We had now earned our food and rest. That evening, a hut warden dropped by and amongst other things advised that there were 4 great days of weather forecast. Yeah right!

Day 2 saw us decide on a day walk that would loop around the tableland via Lake Peel. The day started with a few grey clouds in the north-east, but they would surely dissipate. They didn’t. As we made our way up the ridge to Lake Peel, the weather really closed in. Even though it is flattish, we are at about 1400m at this point, and the wind and rain was way beyond just unpleasant.

Fortunately Mike T took his leadership role seriously and determined that we should turn back to Salisbury as we would otherwise have a few hours of very exposed cold tramping. A good call, and we got back to a warm fullish hut, via Balloon, for a dry out.

At Salisbury Lodge we got talking to a group from the Canterbury Tramping Club (not on a club outing). A discussion ensued comparing our respective clubs. We came away feeling pretty good about the way WTMC ran things – our transport arrangements, collaborative planning and especially the hearty communal real food are features that we enjoy over our Christchurch counterparts. Of course, these things come with the need to plan and commit in advance and that seems to be the main trade-off. A good discussion nevertheless. 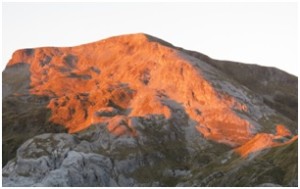 On day 3, we trekked across Gordon’s Pyramid and onto the Ridge to Mt Arthur. The weather was once again fine and views were great. We decided not to make the side journey up to the peak, but rather headed for the comfort of Mt Arthur Hut (which was probably a good call, as it filled up even with Mike M opting to sleep outside in his 1-person fly). Given that it was only about 90 minutes to the car park, there was probably still time for a quick ascent in the morning even though we had to get way early to pick up the other WTMC folk.

On the morning on day 4, Tracey & Mike T decided it was an EASY-medium tramp and ‘slept-in’, while Mike M (me) interpreted it as easy-MEDIUM and took off for an early morning jaunt up to Mt Arthur. I’ll have to say it was at times breathtaking as the early morning sun cast spectacular shadows and the Leslie-Karamea valley was shrouded in an eerie mist giving the drowned river valley effect. Quite a highlight (but I would say that). 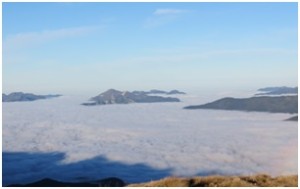 The return hike to Mt Arthur peak took less than 3 hours, so we could get away in good time.  And that’s when the weekend took on its only sour note. We were warned on the way down that the club van had been broken into. And sure enough, a back window had been smashed and side door jemmied open and the van was largely cleaned out of personal belongings – a real downer to conclude an excellent few days away.

It’s such a neat part of the country, a ‘must return‘.