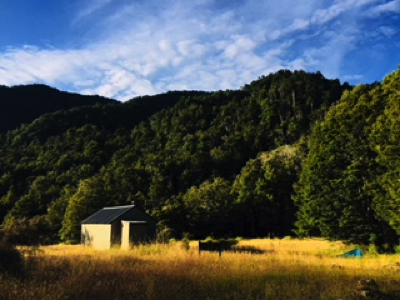 After arriving in Murchison late Friday night and staying the night in cabins at Riverview holiday Park, we set off in the morning to the Jamieson’s Ridge road end, near Tutaki.

A relatively gentle incline up Jamieson’s ridge through typical South Island beech forest and into subalpine scrub, found us at the edge of the bush line in time for lunch. We then carried on out into the tussocks to reach Mole Saddle (about a 3.5 hour walk from the road end). From there began a quite steep descent back into the bush into the Tiraumea Valley, after a couple of km the trail became less steep and evened out and then as we met up alongside the creek, the track then undulated in and out of creek beds (with more ups and downs that is apparent on the map) for the remainder of the day with a very sharp descent to the hut. There were many wasps on the trail, their numbers seeming to peak in the late afternoon – a bit of a hazard! This trail took us considerably longer than we had anticipated (a good 5 hours) and found us arriving into Tiraumea Hut at about 6pm.

Tiraumea hut is a picturesque 6 bunk hut in a clearing by the Tiraumea river. A great spot for a dip after a very hot day!!

Given the time it had taken us to reach the hut it was clear that our original plan to make it to D’Urville Hut (another 2.5 hours) that evening was not practical. As we sat down for a delicious typical WTMC dinner (smoked salmon pasta, followed by David’s modified fondue) we started discussing our options:

Option A: To make it to D’Urville hut seemed unlikely, we didn’t have time on Saturday and felt that adding a 4-5 hour return trip to Sunday’s walk back up to Mole Saddle was also impractical (we were after all just an easy-medium group!)

Option B: Stick to the rest of the original plan, on Sunday walk back up the trail we had come down to stay the night in Mole Hut (4 bunks – so some camping out with the wasps and sandflies required). Then on Monday walk back down the ridge to the van. It was felt that the walk back up to the saddle would be quite tough and probably take us much longer than the DOC estimated 5 hours.

Option C: Walk out via the track going by the Tiraumea River, which would take us to a road end about 20km down the road from where the van was parked. This would require us to either walk back to the van, or try and hitch a ride back to pick it up.

Option D: Walk to D’Urville hut the next day and try to get the water taxi up Lake Rotoroa. This was quickly discarded as the logistics of getting back to the van were likely to be difficult if not impossible.

A group decision saw the majority of the group keen to give the river track (option c) a go. So, on Sunday morning we set off on another very hot day on the track via the river. The track pretty much followed the river, crossing it multiple times. Given pretty low water levels the crossings were very easy – just above knee deep at the deepest! They very quickly went from ‘oh no wet boots, to thank goodness, another river crossing to cool us down! I have since read a blog that suggests there are 47 river crossings on the track. A lovely flat track saw us varying between being in the bush just beside the river, walking through the river and also lots of grassy clearings – a very pretty track. From the hut the DOC signs suggested it was about a 5 hour walk, however it took us closer to 7 hours (including breaks), I think being a relatively large group slowed us down a bit at river crossings. Also, the track and markers were difficult to spot at times, especially in clearings and river crossings, so a bit of time was sucked up doing a bit of reconnaissance and using guess work to find the track again when we lost it.

The last km of the track passes through farmland before hitting the road end. From there we were very lucky that a kind local allowed us to hitch a ride back to the van fairly quickly. We then headed back to Murchison to the holiday park for a swim and our planned dinner (Savoury Rice and Apple & Gingernut Crumble). The night saw us all comfortably tucked up in cabins! Monday came and we made the most of waking up in civilisation with coffee and pastries for breakfast before heading off for the ferry. With plenty of time to make the drive to Picton, we stopped off at St Arnaud and Lake Rotoiti for a short stroll and a swim for those who were keen.

It was a really pleasant walk and enjoyed by all. Obviously, you would want to check recent rainfall and river levels before taking this track! Thanks to everyone for making it such a great trip, especially David for leading!