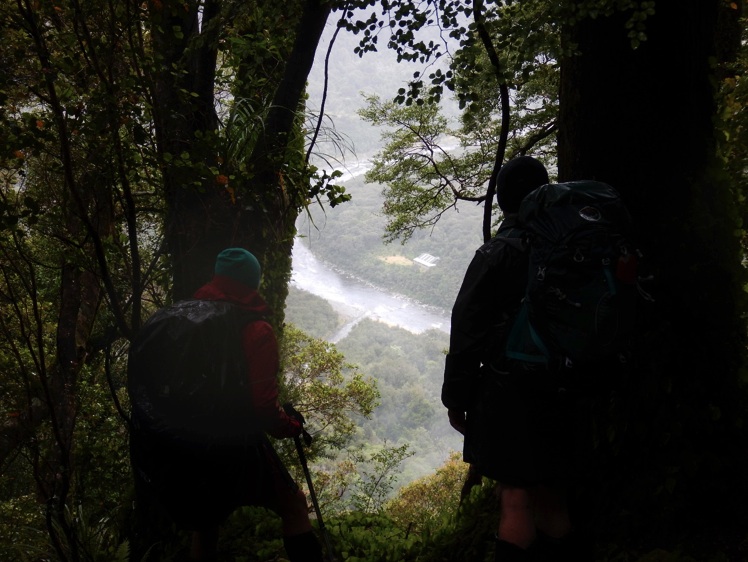 On my last trip to High Ridge we did not manage to get to Totara Creek or Totara Flats hut and instead found ourselves marooned on Flaxy Knob on the Saturday night.

There is good travel along High Ridge and I was keen to do the section from Flaxy Knob to Totara Creek. Pete put this trip on the schedule and I signed up.

We departed on the Friday evening and shared the van with Matt’s group who were planning on exploring the upper Atiwhakatu Stream. The Holdsworth carpark was not too crowded and we headed off to Mountain House shelter. We had good conditions for an evening walk – not too hot and with no rain.

From Rocky Lookout we could see Powell hut up on the slopes of Mt Holdsworth. According to DOC the hut was closed for demolition and replacement with no access to the water tanks. However, I had been there only 10 days or so earlier and the hut was open and fully functional with the gas still working and water tanks usable. We were wondering how much water we should take with us the next day – if the water tanks were available we would not have to take as much from Mountain House in the morning.

We had a pretty comfortable night at Mountain House. It started to rain early in the morning and the rain sounded very heavy but the roofing material made the rain sound heavier than it really was.

On the Saturday morning we set off in drizzle up to Powell hut. We were interested to see what, if anything, was going on at the hut. I hedged my bets and took about ¾ of a full volume of drinking water with me.

As we approached Powell hut we could hear the sound of power tools and a generator and we found a barrier across the track saying ‘hut closed.’ We took the detour path below the hut/work site. This path was already muddy despite being used for only a week or so. We could see workers at the hut site and that the veranda had already been removed. It was not possible to reach the hut (or water tanks). There was plenty of water coming down the Holdsworth track by this stage so I just filled up from a track mini waterfall.

We kept ascending in rain and soon reached the signpost for High Ridge. There is good travel along the ridge with a trail most of the way and old orange markers here and there. There is lovely mossy bush along High Ridge and the travel was enjoyable.

It was still raining and cold when we stopped at Flaxy Knob so we could not have a proper lunch break. We checked out the campsite from my previous trip there (see article above) and then started our descent towards Totara Creek. There is not much of a defined trail down the spur but there are pieces of marker tape every so often. We did lose the trail at times but in general we managed to keep to the route.

It took a few hours to get down to Totara Creek and from one point on the spur we could see Totara Flats hut. The weather improved as we descended and the day became quite warm.

We reached Totara Creek and then went to Totara Flats hut for the night. We had an enjoyable night in the hut. There were eight other people there but plenty of room for us all to relax.

On the Sunday morning we did some exploring and found the site of the old Totara Flats hut (well – we think we found the site). There were a few bits of timber and metal at the old site.

We then went back upstream and headed up Totara Creek. Our plan was to travel up the creek and then climb a spur to near Mountain House. There is an old track on the true right of Totara Creek and this is in good condition.

After some time following the creek we found our spur and started to ascend. There were no makers and not much of a trail so we used map, compass and GPS to help with our route finding. We were conscious of our pick-up time but the route was pretty slow going. There was a steep bit towards the end of the spur but we eventually emerged onto the Powell hut track about 5 minutes walk up from Mountain House.

We then had a quick trip down to Holdsworth roadend. I managed to have a quick swim in the Atiwhakatu river at the roadend to de-sweat before the trip back to Wellington.

We had a good weekend and we all the enjoyed the challenge of our off track tramping. It was good to complete the High Ridge circuit. Thanks to Pete for organising and leading a successful trip.