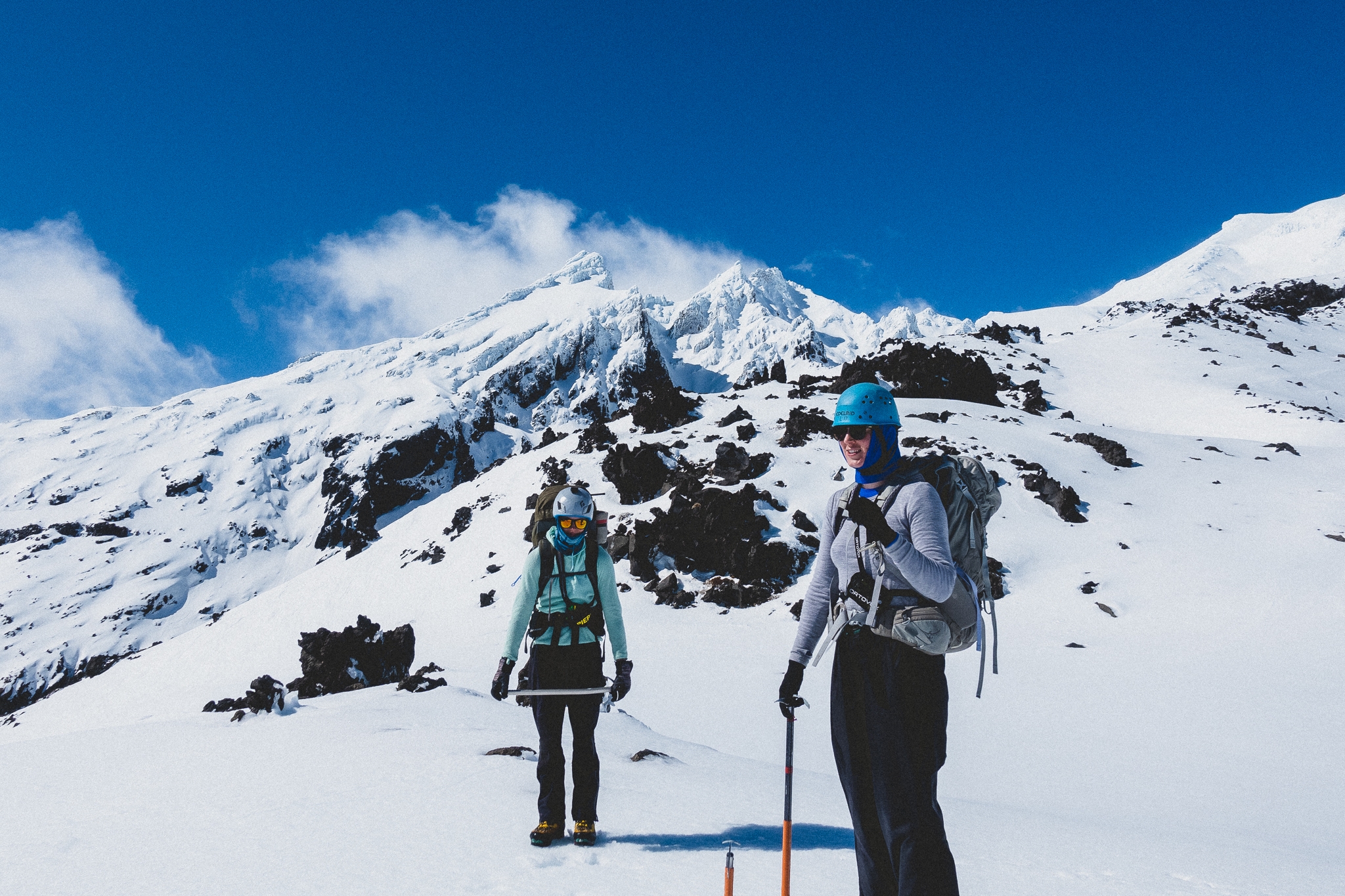 A few weeks back I enjoyed a special opportunity to firm up some alpine skills with the support of a WTMC scholarship on a Hillary Outdoors alpine instruction course. The two days up at Ruapehu were a nice crash course in travelling in a mixed alpine environment practising the tools of the trade.

Our first day focussed on theory, on reading terrain and weather, including especially snow conditions and avalanche danger. We practiced calibrating and finding each other with avalanche transceivers before heading to the ski field. In the blustery and wet weather up the top, we got familiar with moving through mixed terrain, from rock to deep snow to ice. Movement was difficult with the inclement weather and we bulked up in warm gear, carrying crampons, shovel, avalanche probe, and the rest on your back. Wet snow didn’t help either but we were quite excited to get on and learn the skills.

We moved up some steep slopes, switching off the duty of kicking steps while the other two followed the nicely plod path. On our return we practiced self-arrest with and without an ice axe. Without an ice axe getting into an upright ‘table’ position with all fours stuck in the snow is effective. With the axe we are able to stop on harder snow and ice. Thoroughly soaked from all the sliding in the snow, we headed back for a cuppa and debrief at the toasty Hillary lodge.

Our second day was a trip bringing together all the skills we learned the previous day plus some travel using crampons, rope, and a snow stake. We plodded up again from the Whakapapa skifield up a ridge to the NZAC hut a few kms and 600m vertical away. In plotting our route on the topo, we estimated a couple hours to get to our destination and set a turn-around time, in case this took longer than expected. A few hundred meters up the mountain we found icy terrain perfect for crampons. After some practice and hard yards moving up the ridge, we got to the NZAC hut in time for lunch and spot on our estimated trip timing.

Down from the NZAC hut there is a nice steep but not quite vertical slope. We hammered in a snow stake, rehearsed a few knots, and belayed one other down the slope. Halfway down we were confident to go without the rope and down climb the remainder, kicking steps in as we went. Gradually the slope levelled and we ambled our way back to the ski field. By this time the sun was in full force and we enjoyed a couple slides down the ski slopes back to the carpark where we packed up for the day.

All up a great course and trip with a nice mix of theory and hands-on learning. I am grateful to WTMC for the scholarship to take on this course and to Miki and Hillary Outdoors for the awesome hosting and instruction.