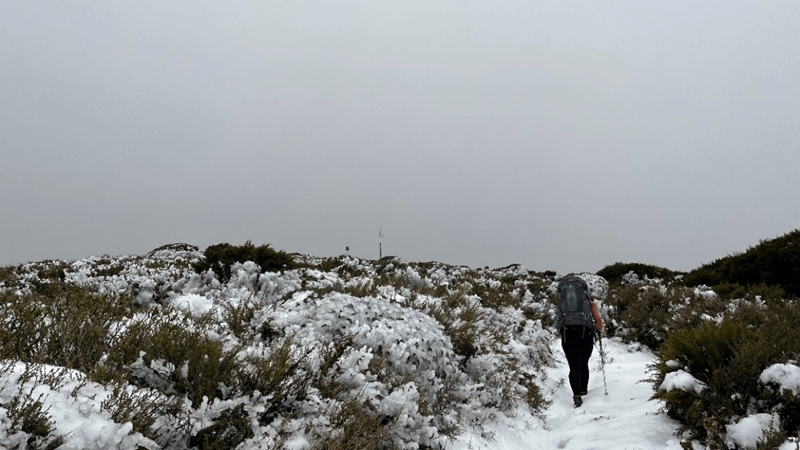 We had an awesome trip away to Te Urewera over Matariki weekend. It was a perfect way to celebrate our new public holiday and opportunity to do what Matariki is all about, reflecting on the past, celebrating the present and looking to the future. Heading away to a very remote and untrodden part of the country and into the great outdoors was also, as always, a great way to connect with our spectacular natural environment and to watch the stars twinkling in the night sky.

Thursday 23 July – the drive up

Eleven of us, four in our medium group and seven in an easy medium group, met up at 3pm at the Wellington Railway station. We had a decent drive of nearly five hours up to Napier, with a stop off for dinner in Hastings. Arriving in Napier, we had booked 3 cabins at the Napier Top 10 for our two groups. This night was super comfy and was preferable to driving all of the way.

Friday 24 July – more driving and tramping up onto the tops

We woke early on Friday morning and left promptly just before 8am to continue our drive up to Lake Waikaremoana. We had a quick stop in Wairoa for coffee and snacks – definitely recommend this as a stopping point. After two and a half hours of driving, we got to our drop off point. After saying good-bye to the EM group, they turned around and headed back to their starting point. The four of us started at 11.30am, eager to get going after all of the driving! There was no warm up for our cramped legs and we were right into some quite technical, steep tramping.  As soon as we started, we dropped into a little stream and I almost immediately lost the track (this would happen a few times in the course of our trip).

After finding the track we headed steeply up for about an hour and had some lunch at the beginning of the ridge. Following our lunch stop we then wound our way up the ridge. On our way up the ridge we weaved up and over many tree falls and then we suddenly came across a tiny patch of snow! We all took a photo of this little patch which then quickly became quite forgotten as we climbed and were suddenly kicking steps through the snow at times. This was quite exciting as we were not expecting much snow. As we climbed the snow definitely got deeper and was coating everything around us. We had to do some careful dodging of ice clumps falling out of trees trying to get our heads and reflected later on that raincoats to save ourselves getting wet from melting snow would have been a good idea!

We eventually popped out on the top and although we didn’t get many views the ice covering the leatherwood was pretty impressive!

Once we reached the trig at around 1400m elevation we were only a few minutes away from the hut, which was just around the corner. We got to Manuoha Hut at 4.30pm and quickly piled on more layers. We had decided beforehand not to do shared meals and I was quite grateful for this as having dehy was nice and fast and I was able to crawl into my sleeping bag to eat it as the hut was freezing!

This hut was also getting a little run down and from the intentions book, no one had been here since April, so I’m glad we made the effort to get to this hut! We tried to get the fire going but the wood was all damp and mouldy, so we passed on this and had a very early night with most of us in our sleeping bags by 6pm. We were all very glad for our good sleeping bags, multiple layers of socks and thermals to keep us toasty.

Saturday 25 June – Bush-bashing down the ridge

After a very nice 14-hours curled up in our sleeping bags, we had a relaxing morning and ditched our plan of leaving the hut early so we could stay in our sleeping bags a little longer. Around 8.45am we pulled on our damp boots and headed off down the trail, grabbing a quick photo by the sign leading to the hut on our way out.

On our way along the ridge, we had more snow until we descended below 1200m, and from there we hit the ferns! This part of the tramp is definitely a route, not a track! In these sections, we were very grateful for the trail markers as these were the only ways to stay on the track. There was more than one occasion however when the markers were concerningly difficult for our four pairs of eyes to spot!!

After bush bashing through the ferns on the ridge, around 1pm we dropped down to Kaipo Lagoon and had some lunch. We passed a single spot with a nice view and with hopes of getting a better one we continued on, but our stomachs won out, and we stopped for lunch by a large tree instead. Lesson for future trips: the only viewpoint of Kaipo Lagoon is about 15 minutes after dropping onto the flat. From Kaipo Lagoon, we had another two hours or so to go before we hit the Sandy Bay Hut sign and descended the final five minutes down to the hut, arriving around 3.15pm. At the hut we settled in with the EM group and told them our stories and photos of the snow. Eoin also was brave enough to have a walk around in the lake; I just dipped a few fingers in – it was pretty chilly. The EM group had the fire going when we arrived and this was welcome after not having a fire the night before.

Looking out from the hut deck at night over the lake was the perfect spot for unspoilt Matariki star gazing.

The following morning, we grabbed a quick photo by the lake before setting off ahead of the EM group at 7.45am. Today was a lot more relaxed than the previous two days, as we cruised around the lake, enjoying the undulating terrain as we crossed streams around the lake.

Wandering around the northern side of the lake we then came across a point that was directly opposite from the hut – this was pretty neat seeing the hut as a little white square in the distance. I also hadn’t realised how far we had travelled by this point. The track was also a lot more visible today which made travel a lot quicker and quite pleasant.

From this viewpoint, we continued for another hour or so until we hit the shelter. This was a nice lunch spot and offered amazing views of the lake. We had a bit of an early lunch break here before continuing on the final section. There were also some little boats at the shelter, and I think when it is running you can hire the boats to paddle out onto the lake. From the shelter, we had a very gentle 300m descent on a very wide path, getting back to State Highway 38 around 11.30am.

While waiting for the EM group to join us, we checked out the Aniwaniwa Falls that start by the carpark. This walk only took about 10 minutes return and it was awesome to see the two massive falls!

Once the EM group had joined us, we all got changed and headed back out on the road. We left Waikaremoana around 12.30pm and got back to Wellington around 9.00pm with stops in Wairoa, Hastings, and Palmerston North. All in all, it was a really great trip and we had good weather. Thank you everyone for your company!

If you’re doing a long drive up the East Coast we’d definitely recommend breaking the trip up with a night at the Napier Top 10. Oslers Bakery in Wairoa has developed a bit of a reputation on some club trips and is another timely place to stop.