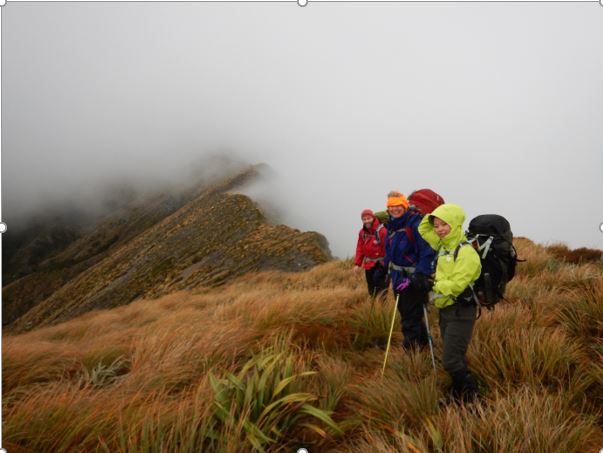 I had last visited Mid Waiohine hut many years ago and I’ve been keen to go back there for a while. So I signed up for Matt and Maj-Britt’s trip there.

We met at Wellington station on the Friday evening and departed for the Wairarapa. As we were driving we were already discussing other options as the weather forecast was poor.  We did not want to have to fight through strong winds on the tops on the Sunday on our way back from Mid Waiohine.

Various options were discussed with Neil Forks being an initial favourite. However, we dismissed this option because i) I had been there last year, ii) due to the limited daylight hours it would have been a there and back again trip on the same track so a bit lacking in variety.

In the end we decided on a trip to Atiwhakatu hut on Friday night then Totara Flats hut on the Saturday via Powell hut and High Ridge. This had the advantage of limited time in wind on the tops and being new territory for all of us.

At the Holdsworth roadend there was an incredible amount of noise. There was a group of about 40 school children plus parents milling around in the carpark shouting at each other with some of them singing Christmas carols.  Luckily for us they were only going as far as Holdsworth Lodge that night and then hopefully no-where near us for the rest of the weekend.

As we tramped to Atiwhakatu hut on Friday night we pictured ourselves the next night at Totara Flats Hut and gloating at Richards shelter building group. We also talked about Aimee’s Big Day Out the next day and what her and her group would end up doing in view of the poor weather forecast.

We arrived at an empty Atiwhakatu Hut and had the hut to ourselves for the night.

It was a bit blustery on the Saturday morning and we were away by 7.30am. We headed back down the Atiwhakatu track and then took the track up to Mountain House shelter.  We enjoyed this track as the bush is lovely and after some shortish steep climbs there were flat bits to catch up with breathing.

After a quick stop at Mountain House shelter (and seeing a small group of the school children) we started up to Powell Hut. As we ascended we had views of High Ridge and our route to Totara Flats.  It was windier and colder as we got to Powell Hut.

We had a quick lunch at Powell Hut, put on more layers and kept ascending. About 100m height gain above Powell there is a sign pointing to High Ridge.  We took compass bearings and headed off towards High Ridge.

There was mist, drizzle and some quite strong wind gusts but we covered the open tops of High Ridge pretty easily and entered the shelter of the bush. The route along High Ridge is marked reasonably well with tape and old Forest Service round metal orange markers (although some are very rusty now).  The travel along the ridge is good although the trail disappears at times due to tree falls, lack of use and general growth of the bush.  The high altitude bush is lovely to travel through.  To ensure we were going in the right direction, especially when markers were hard to find, we followed a compass bearing along the ridge.  We made steady progress along the ridge and we thought we would get to the Totara Flats area about 5pm (just before complete darkness).

At Flaxy Knob we had another quick stop and started to descend a spur towards Totara Creek and the flats. Our timings went out the window at this point.  The first part of the spur had no visible trail, very sporadic markers and no obvious route.  There was a great deal of clambering over, under, through and around large dead tree falls and we made very slow going.

By 3.30pm it was already getting dim in the bush so we stopped to reassess our plans. We realised that there was going to be no way would get down the spur before dark and with the state of the spur, lack of markers and route it would have been impossible in the dark.  The spur is steep with no flat areas for setting up a camp and there were no convenient looking places for water.  We therefore decided to go back up to Flaxy Knob where there were some flattish spots for camping (but also no water).

We battled back up to Flaxy Knob in increasing dimness. Luckily as we had only descended about 100m vertically it did not take us that long to ascend.  After some scouting around near Flaxy Knob we found a flattish spot that had room for a tent and tent fly and had protection from a northerly wind by the hillside.  We set up our camp in the rapidly descending darkness.  We had limited water so Matt bravely went on a mission with water bottles, GPS and a whistle to try and find a source of water.  He very sensibly turned back quickly due to darkness but without finding any water to replenish our supply.  We would have to ration our water.

It was completely dark by now but we were relieved we had shelter and enough water for a drink and Spartan dinner. We had some vegetables which could be eaten raw without cooking in water and also some mung bean sprouts  – these all contained water.  We had to put some miso paste into the noodles to give some flavour but we didn’t want to add too much as the high salt content would make us thirsty.

The main course for dinner was a bit bland and dryish but we all had just enough to fill us up. Maj-Britt had brought along some chocolate brownie for dessert and this worked out really well as it did not require any more water for preparing/cooking.  I used the last of my night water ration to brush my teeth.

At about 6pm it started to rain to add to the pleasurable conditions so we were all in our sleeping bags by 6.30. We left the billies out overnight to collect rainfall water.

Of course our plans of gloating at the shelter building group had completely backfired. We realised we were in a less comfortable spot and with much more hastily set-up shelters so we were in no position for gloating.

During the night it poured with rain and we could hear the wind roaring overhead. Our site gave us protection from the wind and the tent and tent fly did surprisingly well at keeping us dry.

We were up early on the Sunday and had our lunches (non-water requiring) for breakfast. It was still dark and raining so we packed-up and left as quickly as we could.  We had abandoned the idea of descending the spur down towards Totara Flats for a few reasons :

Maj-Britt had checked the weather forecast overnight (there is cell phone signal at Flaxy Knob) and the wind was predicted to be no stronger than Saturday. We also knew there were some large puddles on High Ridge that we could drink from.  So we chose the ‘known known’ rather than the ‘unknown unknown’ and headed back the way we had come on High Ridge towards Powell hut.

After about 30 minutes we found the large puddle had turned into a small tarn due to the overnight rain so we quenched our thirsts and filled-up water bottles.

We got along High Ridge pretty well and we made it over the tops to Powell hut with no trouble. We reflected that we could probably have made it to/from Mid Wiohine after all.  At Powell Hut we had lunch (breakfast) and soup.  We saw from the hut book that Aimee and crew had passed through the hut the day before but we couldn’t work out which way they were doing the Powell-Jumbo circuit or if they were just doing an up and down to Powell.

We had an uneventful trip from Powell back to the car and were back in Wellington by about 4pm. Despite the challenges of the final spur, the sub-optimal campsite, lack of water supply and rain we did enjoy ourselves and our tramp.  These kind of adventures make for memorable trips and create a bond between the group members.

There were also some good tramping lessons to be learnt or re-reminded of :

Thanks to Maj-Britt and Matt for organising and taking us on such an enjoyable and memorable adventure. I’ll have to sign up for Mid Wiohine hut in the future.