This walk is in the Akatarawa Forest, and starts and finishes at Maungakotukutuku Road near Paekakariki. It’s no problem finding the turn-off for Maungakotukutuku Road, just look for the two metre long road sign requiring two posts. The Road took us well up the hill, cutting down the amount of climbing we had to do on foot. From the carpark, we walked a 4WD road through native bush. 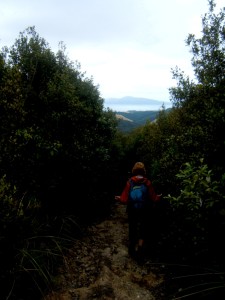 It was very different from the bush at Karapoti Road on the other side of Akatarawa Forest (near Upper Hutt), in that there were very few if any pine trees to be seen during the whole Mt Titi walk. It was a gradual climb up this road, named Perhams Road, for about two hours. It was taking longer than expected. We stopped at an intersection, had a look at Garth’s GPS and realised we were closer to Mt Titi than we thought.

Armed with just a map and compass, I was feeling slightly old-fashioned. The GPS was actually very useful because one feature of the Akatarawas is that it is like a giant maze: roads and tracks going in all directions, and only a couple of road signs, no track signs at all. In fact we were right next to Mt Titi. We located the partly overgrown track to the summit, which I knew about from the description on the Regional Council’s website. This was to be the only useful description from the website, which I will explain further on in this report.

It was just a few minutes on this partly overgrown track to the top of Mt Titi which is 613 metres. What we found was a pole in flattish ground surrounded by native bush. There were no views. As the trip leader I didn’t know whether to laugh or cry. I was certainly feeling some pressure to make the day about more than just seeing a pole in the ground. It had me wondering if one day I made it all the way to Mt Wainui (722 metres), which is to the south west of Mt Titi, would there be a view at the top? Luckily, a short distance on from Mt Titi, there was a rocky clearing on the side of the track, and we climbed up to get some views of the Kapiti Coast. 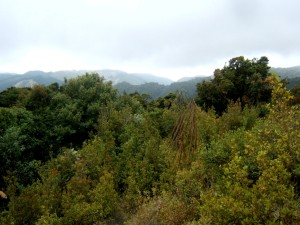 We then walked on a bush track in the direction of (708 metres). The Regional Council website stated that “experienced trampers may wish to continue north along the ridge to Mt Maunganui”. I would suggest that should read “highly experienced trampers”. There is no marked track for most of the way. Normally I avoid all tramps that involve bush bashing, but I decided on this occasion it would be a moderate and interesting challenge. So we walked the first part, which is a marked track, until it split in two going left and right off the ridge. And that’s as far as we got. The bush was so thick that going straight ahead on the ridge towards Mt Maunganui was not possible. The left track was more of a route, and started heading back to Mt Titi. The right track lasted only a few metres and became the thick bush through which travel was impossible. Looking back I wondered if we should have followed the left track some more to see where it went, but on the day I think we had all given up hope.

We then headed back a bit, and took the bush track down to the carpark. And this was the highlight of the walk. It is surprising how much better a foot track is compared to a 4WD road, even though the surrounding bush is exactly the same. However the Regional Council suggest that walkers return the same way on the 4WD road! I am sure this would be a disappointing experience for some people. Possibly they recommend this because near the end of the bush track, in true Akatarawa style, the track splits up in all directions and there are no signs. It took us a while to study the map and GPS to work out the correct way forward. A short time later we were back at the carpark and finished by mid-afternoon. So it was more of an Easy Medium trip, but I’m not complaining. It’s better a Medium daywalk becomes Easy Medium, than a Medium becomes a Medium Fit. I have a feeling if we had continued on to Mt Maunganui it would have become a Medium Fit trip at least.