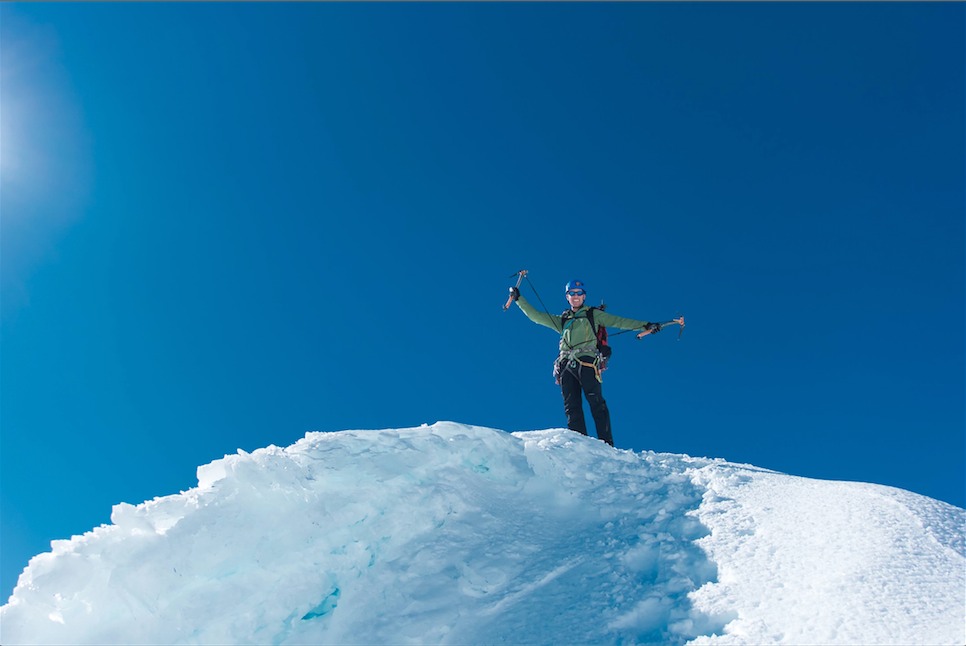 Every time I’ve ever visited Whakapapa, like most others (I imagine) I have stared up in awe at this ridge line and wondered just what it feels like to stand on the tops and look back down at the ski field. The guide suggests it’s not difficult, but it depends on your experience. I wouldn’t say it’s overly hard technically, however it threw enough physical and mental challenges to keep us busy for over 11 hours!

A few people have said this was the weekend of the year for the weather, and I wouldn’t disagree. However as with all mountaineering there’s generally a negative to balance a positive. The sun for the whole weekend was magnificent, and I’ve never seen the ski field so busy. But for climbers, warm sunny conditions can mean uncomfortable snow conditions and given we had to spend a considerable amount of time on the upper Eastern slopes, this was especially true for us this weekend.

We set out on Saturday morning at 7am in two teams of two – myself and Elisabet on one rope, and Henry and Gareth on the other. The banter levels were high as we made our way up to the entrance to Broken Leg Gulley where we picked a line up onto the ridge proper. We opted for a shortcut half way up and mis-estimated the steepness of the route, so were a little uncomfortable with just one axe at times as the slope kicked back. Still nothing could dampen our enthusiasm so we made short work of the big climb up. We arrived on the summit of Great Pinnacle shortly after 9am where we bashed in a snow stake and clipped in to sit on the top and admire the incredible views. In winter there is barely enough room for 3 people on the summit so you can imagine the feeling.

Next came what is arguably the crux and most anticipated part of the route – a massive 50m abseil off the summit down to the ridge line below. There were no rocks to speak of on the top so we dug a very deep slot to bury a snow stake and backed it up with a second just in case. After tying the ropes together and throwing them off, I took the first position. Stepping out into the void was the most breathtaking thing I’ve done but after beginning the descent it quickly morphed into pure type 1 fun (if you like exposure that is!) The others followed down one by one and everything was on track, until we realised after 15mins that we were not getting our ropes back however hard we pulled! In the end the only option was to climb back up the face to figure out the problem and reset the abseil. It took me about 15 mins with one axe and two prussic cords on the rope to climb the 50m face to the top, where I realised the knot had passed through the anchor (don’t ask me how!) and we were therefore pulling on the wrong rope!! Lesson learned – try pulling the other rope before you proceed to climb all the way back up! Amazing how simple things appear when you are not stressed.

We lost over an hour with all this faffing and by this time it was getting hot. The snow was getting a little loose but luckily there was a very solid layer beneath the stuff on top so we decided to press on. The next section saw us turn the Middle Pinnacle to the East, by traversing the upper slopes and descending a nasty near vertical ice section (about 10m) before settling into a anchor under the relative safety of a big rock. Everyone found this section mentally challenging as our crampons would only penetrate the ice by up to a centimetre in places – with such a massive drop below it really got the heart racing. After traversing what was possibly the worst snow of the whole traverse next, we arrived at the saddle between the First and Middle Pinnacles where we had chance to catch our breath and consider the options again.

We were faced with what appeared to be either a big abseil off the ridge and into zig zag gulley beneath, or attack the first pinnacle head on and climb a rather technical pitch to its very summit. In the end the group decision was made to go to the top as there appeared to be a much more favourable escape off the other side. We had no idea what to expect at the top, but I was convinced from my research that there would be a route through to easier ground. I led the next pitch across some steepish snow gulleys, rocks and rime, reaching the summit with a few metres rope to spare. What I found was a tiny ledge blocked by the smallest of cat walks of very soft snow. A tender step and a hop and I was building another solid anchor to bring Elisabet up. The view from here was the best of the whole day, and I revelled in the few precious minutes of sitting there in silence with my legs dangling off the edge. When Elisabet arrived we had a rather long chat about whether this route was viable as I could see no way to get over the last 3m to the true summit – it was crumbling snow and ice over bare rock with no easy way of protecting it. In the end I had to descend off the ledge to the East about 3 metres and after placing a solid cam in a big crack, found a small chute of good snow which took me to the other side and onto one last traversing pitch. After cresting the last peak of the first pinnacle I was greeted with a tame and inviting snow slope all the way down to our escape route where we could walk off. I brought Elisabet across and Henry soon followed on lead. We said bye and descended the easy slope where we could finally sit down for a breather and eat some long overdue lunch.

And then, nothing happened. After about 20 mins we were expecting Gareth and Henry to pop their heads over the crest and begin the easy down climb to join us. Every 10 mins or so Henry would shout down to say that the rope had not moved. The wind had picked up and given the winding route over the First Pinnacle summit, it was impossible for them to hear each other. Henry tried in vain to tug the rope to indicate to Gareth he was on belay but the rope wouldn’t move. We’d later discover that the rope had become caught somewhere along the pitch, effectively cutting off all communication between the two of them. After 45mins, we were starting to get concerned and talked of heading back up to re-climb the pitch on our rope. Instead I managed to get hold of Gareth on his phone to find he had not left the anchor because there was a heap of slack in the rope. He did the right thing by staying put, and as soon I could relay that Henry had him on belay, he began moving.

Gareth, the absolute champion that he is, had to make one of the crux moves of the traverse without an effective belay. Instead he took in coils with every step he made, so the going was terribly slow. The shouts of relief from Henry were heard down the ridge by us when Gareth’s head finally popped up behind the First Pinnacle summit. Both the guys had been stood in shaded, windy belays spots for over an hour so they were understandably very cold when they finally arrived on the safe ground with myself and Elisabet. We had an extended break and layered up, and after just one more pitch of down climbing we arrived into the setting sun on a lovely 25 degree slope that would take us back into the ski field. It was there that we broke out the sweets and smiles returned, realising that we had gone the distance and knocked the bugger off! 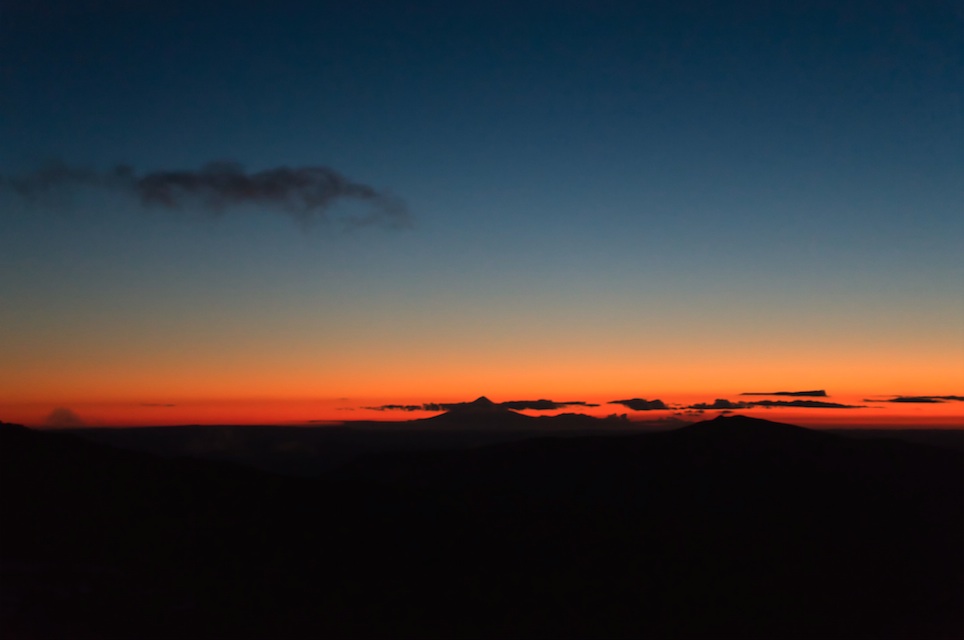 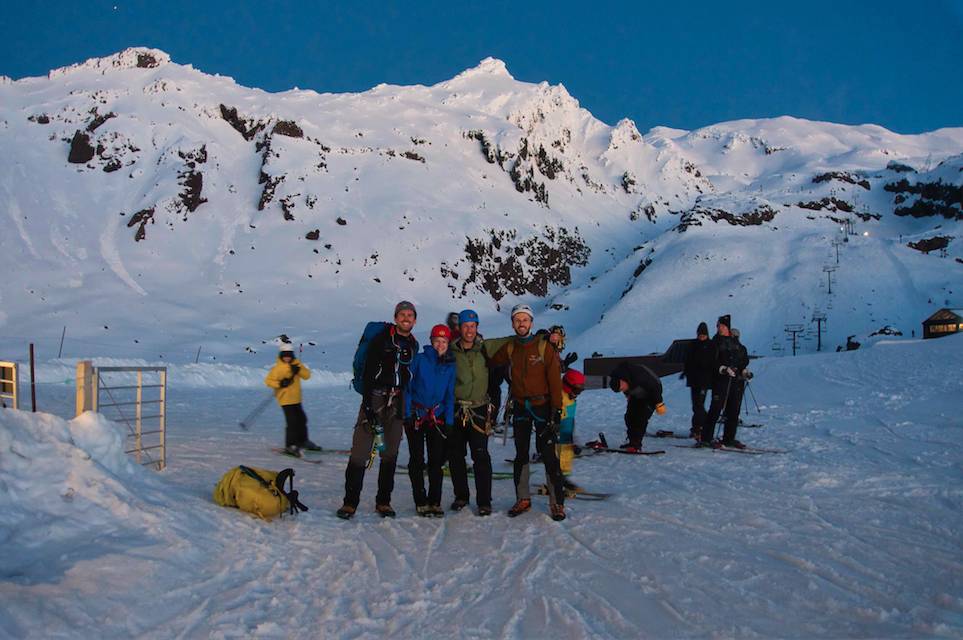 Team shot with the route we took as the backdrop. Luckily it was night skiing so we got a lift down in time for dinner! (credit A friendly snowboarder)

We arrived back to the lodge after dark and spent the evening sharing pictures and videos, and enjoying a few attempts at the table traverse with some of the other lodge members.

Sunday saw us up at a later time where we headed back to Broken Leg Gulley. We bumped into the team from Tararua Tramping Club, who were undertaking their AIC course, pitching up the slopes we had used to access the ridge the day before. We climbed high into the gulley towards the ice route Chiming Bells, where we found an enjoyable 3 pitch climb up to the plateau below Great Pinnacle. Henry and Gareth went up to the summit of Great Pinnacle again where they managed to retrieve the snow stake and cord we’d left yesterday. There they found a group who had just used the stake to do the abseil and were about to set off on the traverse. They wisely suggested the team re-think that idea – the weather was even hotter today and it was very late in the day to be just setting off after the Great Pinnacle.

We had a lovely stroll down the ridge taking in the view, and after ~300m of front point traversing (my calves are still thanking me for that) broke into another easy gulley down to the ski field where we packed up and hit the road. What a weekend!