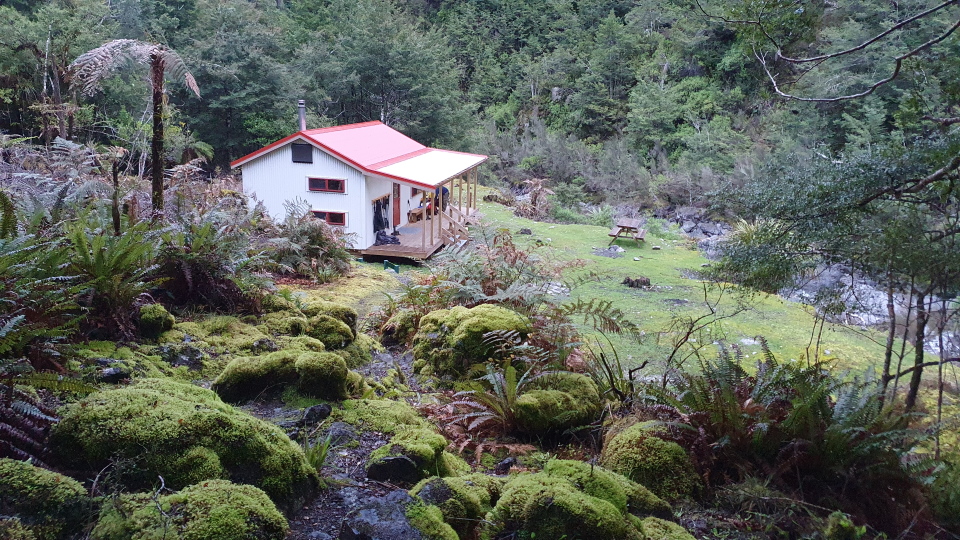 I am not a superstitious man, but even I am loath to tempt fate by venturing out, away from civilization, on All Hallow’s Eve. On the night of Samhain, when the veil between the worlds is thinnest and the spirits of the dead are free to roam the earth, anything is possible, and good, sensible folk keep to their homes to wait for the dawn. But alas, due to the disruptions of Covid lockdown, this was the first club trip available in months. And so with few other choices, on the Halloween weekend of 30 Oct-1 Nov, I set out with my group into the dread Ruahines to a little cabin in the woods known as Iron Gate Hut. The series of supernatural and disturbing events that followed, stories of white-knuckle terror, will send chills down your spine.

The first scare faced by our band of adventurers was the trip leader of the second group having to bow out after developing possible Covid-like symptoms, but not before, as master of the food, arriving at the van (facemask and all) to drop off our shared cooked dinner supplies. A very wise man said that bleach is a reliable ward against Covid. With no guarantees that this sick individual had not coughed on all the food, I was ready to drizzle bleach over our rations and so guarantee its safety. I was dissuaded by my groupmates, who reassured me that boiling the food in a billy was just as effective, and we ended up cooking a decent bacon and leek pasta with the supplies. So far I have not developed any flu-like symptoms. But as it is only day 4 back from the trip out of day 14 of my voluntary self-isolation, it is too early to tell whether bleach would have been the better solution. And of course, I may be asymptomatic.

Leaving the city lights of Wellington Train Station at 5:30pm in our van, we raced the sun to reach Petersons Road, the entrance to the Ruahines. But, arriving at the road end at 10pm, not even daylight saving was enough to prevent us from being swallowed up by the pitch-black night. After a short (30 minutes) and non-demanding walk under torchlight over a wide and gently downward sloping track, we arrived at Alice Nash Memorial Heritage Lodge, our stopping place for the night, only to find it eerily quiet and deserted by all but us.

The lodge had been built in memory of Alice Nash by her daughters, and a large black and white photo of the stern matriarch of their family hung from one wall of the hut. All night long I could feel her eyes boring down at me from that portrait and following me around. Unable to sleep, I got up very early, much to the annoyance of my unaffected (less spiritually-attuned) groupmates to sit outside whittling away at a piece of wood.

The next morning, conditions were overcast but dry, still, and warm. It was a four hour tramp to our destination, Iron Gate Hut, along a relatively flat trail cut around 200m above and following the Oroua River, in between steep ascents and descents to two creek crossings where the track devolved into a mad scramble up roots. It did not help that in the run-up to Halloween I had been indulging in a steady diet of horror films, including The Ritual, The Blair Witch Project, Evil Dead, and horror guru M Night Shyamalan’s masterpiece The Happening. My imagination was in hyperdrive. Feeling a sense of tranquility as I walked and listening to the rustle of the bush, I was reminded of the movie The Happening where the trees come alive and start emitting psychoactive pollen that drives people to commit suicide. I knew now that the feeling of calmness and inner peace was a nefarious plot by the trees to lull me into dropping my guard, which I quickly rectified by scoffing down several caffeine-infused muesli bars and brewing myself a triple-strength espresso the next morning to keep me on edge.

The feeling of nature being against us intensified as we neared the lodge, and a buck deer began shadowing us. At a clearing, the buck (it must have been quite young, for its antlers were barely developed) confronted us; steam rising from its fur and staring at us with unabashed hatred before crashing away into the woods. We also saw some whio (blue ducks). I have advised my compatriots that if they want to see more ducks in Wellington there is a place in the Botanic Gardens.

Around 2pm we arrived at Iron Gate Hut to spend the night of Saturday 31 November, Halloween. We could not have picked a more haunted hut to spend Halloween. Built on the ruins of an older hut with a lot of history attached to it, a plaque commemorated the Royal Engineers for aiding in the construction of the new hut. This raised the question: why did a heavily-armed detachment of Royal Engineers need to be involved? Who or what did they need protection from as they built?

As it was constructed in 2019, the cabin’s facilities were modern and clean, right next to the Oroua River for swimming, and with a stove, fully stocked woodshed, and wood-axe for axe murdering. The hut’s design did have one glaring oversight: the long drop toilet was a good 200m and 5 minutes away up a rocky track. At night, going up to the toilet I was visited by the buck again who stared at me with glowing eyes – although the eyes may have been glowing because of the reflection from my head torch. The rest of the night passed relatively without incident. Either deer or antlered spirit, I assumed that was my visitation by the fae this year. Around midnight, a short sharp downpour of rain rattled off the tin roof of the hut to mark the end of All Hallow’s Eve.

Despite the rain that night, by next morning it had drained away. Our group departed Iron Gate Hut at 7:30am and made the five hour journey back to the van ahead of schedule over firm ground.