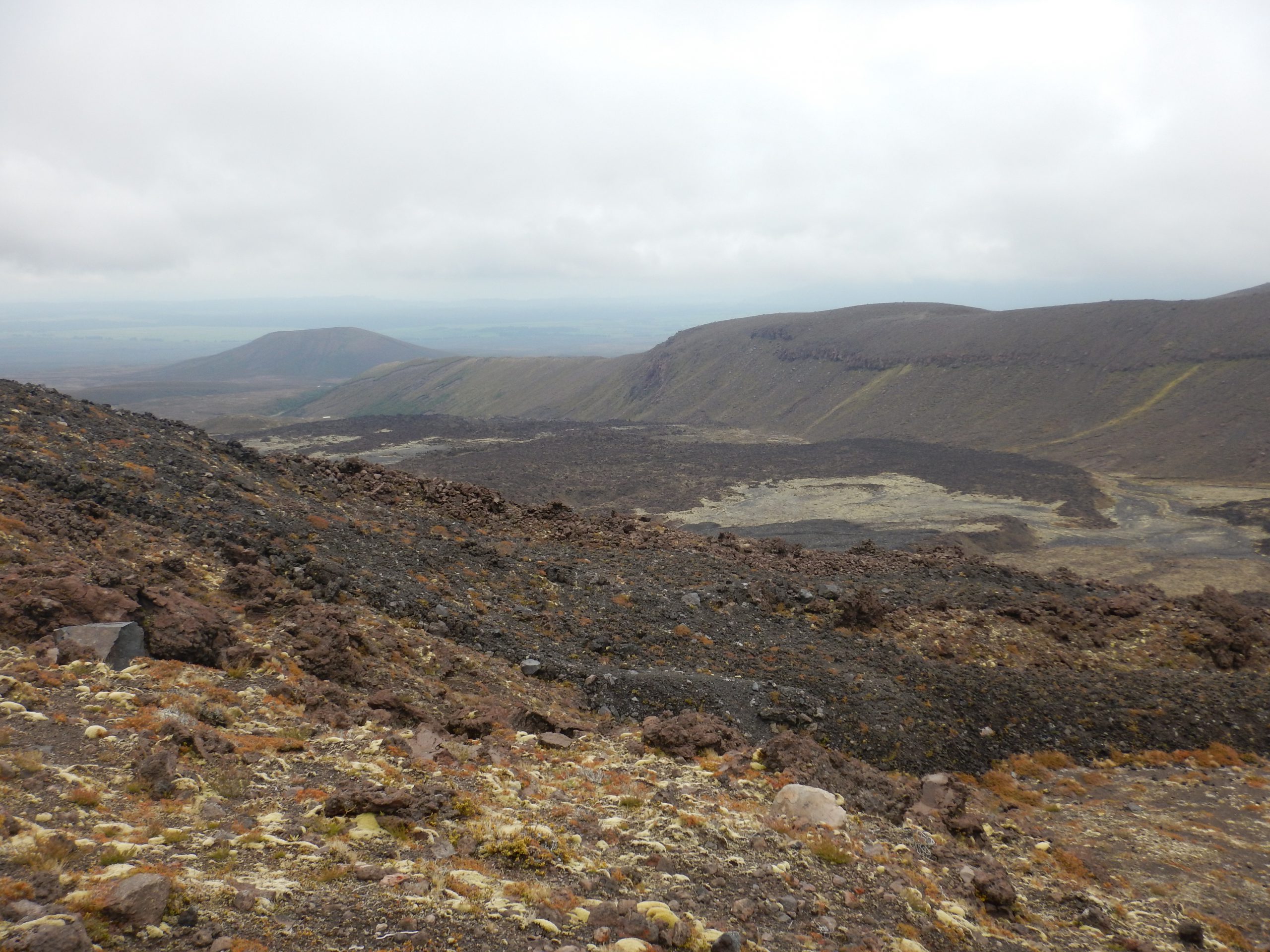 I had not done the Tongariro Northern Circuit for many years so signed up for this tramp when it was advertised.  Dan was the leader but unfortunately he had to pull out a few days before we left due to blisters that he had developed on a tramp to the Kaweka range.  Luckily Dan had done most of the organizing so it was easy for James and I to take over this weekend tramp.  The plan was to drive to the Club lodge on the Friday night, walk from Whakapapa to Waihohonu hut on the Saturday and then back to Whakapapa on the Sunday.

When we arrived at the top of the Whakapapa road on the Friday night the weather was poor with rain and mist and low visibility (plus darkness).  We had some trouble initially finding the track to the lodge but Brian’s tip of ‘look for the concrete barriers’ was the perfect instruction we needed to find the track.  We were soon in the lodge where we had the safety briefing and decided on the time to get up the next morning (6 am).

We were out of the lodge just before 8am and with final packing we started tramping at about 8.20am.

The first part of our route was the track from Whakapapa to Mangatepopo hut.  It was warm and humid enough to be able to wear shorts and tee-shirts.  This is an undulating track and we reached the hut for morning tea.

After morning tea we started heading up the Mangatepopo valley.  The terrain became more volcanic but there are also some grassy areas in this valley.  We had an early lunch on the track up to the entrance to South Crater.

South Crater is a flat expanse of land about 800m across.  Despite mist we could see the crater and surrounding hills.  We could not see the top of Tongariro as it was hidden by the mist.  We had a sharpish climb to the high point of the crossing of 1868m and despite seeing some interesting volcanic rock formations we could not see much else due to the cloud and rain.

As we descended from the high point we came across three people who were struggling with the descent.  One of the group was holding the hand of another group member and they were going very slowly.  They had no proper wet-weather gear, not much warm clothing, no shelter, little food and no PLB.  We soon came across more people of this group.  They were spread out over about 50 metres with the people struggling at the rear not visible to the people at the front.  They were all stopped and were waiting for the back-markers.  They were all poorly equipped and were all cold and looking miserable.  We were put into a dilemma of what to do about these people and we were worried about them.  We stopped to discuss what we could do but realized that we had to look after ourselves and that we had to keep moving to ensure our own safety.  I told one of these people to call 111 if they got into more trouble but mobile reception is very patchy on the mountain.  I also said that we could not rescue these people.  At this point we were all going strong and had food, shelter, gas cookers, shelter and a PLB if we had got into trouble.  I had heard about ill-prepared people going over the Tongariro Crossing but had never come across people like this before.

We left the slow and miserable group and passed the Emerald Lakes which were only partially visible in the cloud and rain.  Soon after this we turned off down into the Oturere valley.  This valley really looks like a scene from Mordor from the Lord of the Rings.  Once in the valley the travel was easy and we made good progress to Oturere hut.  At times we could see up onto the Crossing area which was still shrouded in cloud and rain – the slow group would have been having a very miserable time up on the Crossing.

We were pleased to arrive at Oturere hut.  It was raining heavily but there were people at the hut who had the fire going so we could warm up and dry out a bit.  I mentioned to the hut warden about the people we had seen on the crossing.  He said that there was nothing that could be done about it at the moment and ‘they got themselves into their situation and they will have to get themselves out of it.’

We discussed about staying at Oturere hut but decided to push on to Waihohonu hut.  It was still miserable when we left but soon after the rain stopped and were able to remove some of our clothing layers.  It took us just under three hours to get to Waihohonu hut and we arrived at 7.15pm after nearly 11 hours on the go and about 29km of distance.  We were all tired but pleased we had pushed on from Oturere hut.  We had booked spaces in the hut so we knew we had mattresses waiting for us when we arrived.  There were about 10 other people in the hut but it is such a spacious hut that there is space for everyone.  We had a comfortable evening in the hut with the fire going and enjoyed a Moroccan couscous for dinner.

On the Sunday we were away from the hut at 8.30am.  The hut wardens were friendly and generally provided useful advice.  We stopped off at the original Waihohonu hut that was build in 1911 and had separate men’s and women’s quarters.  The men’s side of the hut had a fireplace while the women’s side had a mirror.  The weather was pretty good and it was warm enough to just wear shorts and tee-shirts again.  We could not see the mountain tops though as the cloud was still hanging around.

We decided not to visit the Tama Lakes due to feeling a bit tired from the day before plus being aware of the long drive back to Wellington.  We stopped off at the Taranaki Falls on the way back and reached the van in the early afternoon.  We were still worried about the group of people we had seen on the crossing but a quick google check revealed no missing people on the mountain.

We had an uneventful trip back to Wellington.  Thanks to Dan for organizing (but unfortunately not being able to take part) this tramp to Tongariro National Park.

Author’s note: although this was a medium level tramp, it ended up feeling more like medium-fit