We left Wellington early Friday evening under an even mix of blue sky and high cloud.  By the time we reached Kapiti, there was no cloud, the blue seemed bluer and tinges of a sunset began to appear.  Weather-wise, we wondered if were leaving behind in Wellington a perfect weekend.  We on the other hand, knew what we were heading to – for the higher reaches of our Saturday trip between Mangatepopo and Oturere Huts we would be accompanied by ‘occasional showers and a 10km/h North-easterly with a wind chill of 1degree C’.  That didn’t sound too bad at all.

Saturday morning greeted us with cloud down to below Tongariro saddle.  Of what we could see of the saddle, there was little snow on the slopes this side, so we weren’t expecting too much over the top and in the crater.

We left Mangatepopo Hut around 0730 for what would end up to be a six hour tramp to Blue Lake and then down to Oturere Hut for the night.

The route from Mangatepopo Hut to the saddle took us up a Great Walk-quality path through a world of pyroclastic rock.  Ngauruhoe watched us from above, disappearing then reappearing from behind the clouds.  Ninety minutes after leaving the hut we were on the saddle and waving Holger and his group off up Ngauruhoe (they had a change of plans and would attempt to summit).  We then set off to cross South Crater.

The South crater had wet snow and not a lot of it.  There was no need for crampons here.  It took us an easy 20 minutes to cross the crater.  Crampons weren’t needed for the climb up out of it either as there was more rock than any slippery white surface.  Up at the rim, which is also where the Tongariro Summit track junction is, we stopped for a breather and had a chat with a rather large group from Rongotai College (who were planning to stay at Waihohonu that night rather than Oturere – to our delight).  Not wanting to hang around at this exposed location given the deteriorating weather, we headed off over our high point for the day, passing Red Crater at 1868m.

Unfortunately, while the visibility allowed us to see past Red Crater’s rim, we couldn’t see much into the large lava-encrusted red bowl.  It was then down the ridge to the smallest of the three Emerald Lakes.  This small lake looked frozen offering us a fun activity had we had ice skates.  The largest of the Emerald Lakes, which is right beside the smallest, was nowhere to be seen as visibility was now poor – to the point that as we started across the Central Crater minutes later, it was hard to spot the next pole.  However, the white out we were experiencing didn’t last long and the compass and GPS stayed tucked away.  We ventured on.

The snow in Central Crater was deeper and softer than it was in South Crater.  Again, no need for crampons for this crater traverse.  The track poles were relatively close which made navigation easy amidst patchy visibility.  A little over three hours from leaving Mangatepopo Hut, we reached Blue Lake with excitement and an appetite for lunch. 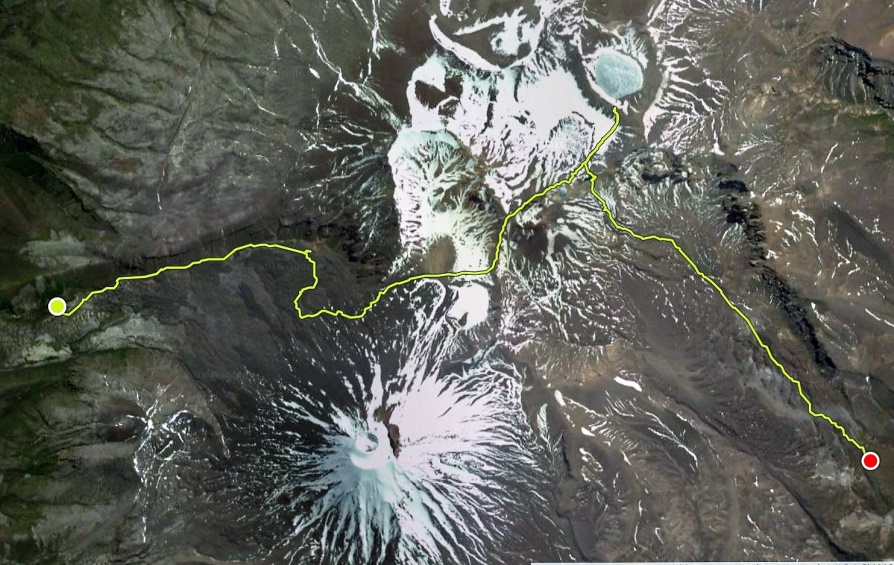 The plan was to lunch at Blue Lake but all the lake had to offer us was whiteness – the lake couldn’t be seen.  Dan however assured us Tongariro’s beautiful Blue Lake was right there in front of us.  His GPS supported his claim, although we would have believed him anyway.  Hoping we would get at least a glimpse of the lake, he ventured down towards the lake edge in search of some visibility.  We watched him disappear as if he had entered platform 9¾ to Hogswarts.  But he wasn’t gone for long, as moments later he reappeared from the other side with a ‘sorry, there’s not much to see down there’ look on his face.    Given the cold and now breezy conditions, our lunch stop would need to be somewhere else.

We started our return to the track junction to Oturere.  As we began our way back down into Central Crater Dan demonstrated some bum-sliding.  Although his slide was not super-fast, he gained ground coming down a lot quicker than we did retracing the steps we made coming up.

Lunch was at the middle-sized Emerald Lake just below the Oturere Hut track turnoff as this offered us some shelter from the northeasterly.  After our lunch and a couple of rounds of stone throwing onto the ice in the lake, we trudged our way down the pyroclastic spur to the Oturere basin.  Six hours after setting off from Mangatepopo Hut, we arrived at Oturere Hut.

Being a Great Walk hut, Oturere’s a nice stop for the night.  It’s got lights and gas heating.  With Andrei’s group and a friendly four from the BOP, we spent the afternoon relaxing.  As we arrived at the hut early, we had plenty of time to fit in a stroll to Oturere waterfall a short distance from the hut.  Dinner was superb – pasta with salmon – and lots of it.  Being Italian, Eleonora knows how to make a good pasta dish.  Having arrived at the hut early, and therefore looking at an extra-early bedtime, none of us minded ‘losing an hour’ due to the clocks going forward.

We woke Sunday to a forecast that would encourage a ‘no dicking around’ return trip to Mangatepopo – ‘Periods of rain falling as snow above 2000m.  Easterly’s rising to gale about the tops and a wind chill factor of -6o’.  This will be fun.  So Dan’s plan for the trip back was ‘short with few breaks’.  We layered up and headed out.

55 mins later, having crossed Oturere basin, we paused at the bottom of the spur up to the crossing.  Dan estimated we would take 30 minutes to get up the spur (he was spot on with this time estimation) – the first of two inclines for the day.  A short break was taken at the lake where we had lunch the day before, and then it was on and up to the high point of Red Crater.  While that section was the slog for the day, we made the Tongariro Summit track turnoff, a short distance further, in good time.

45 minutes later, and after sludging across a watery South Crater (we could choose between water or mud), we were back on the saddle looking down the Mangatepopo valley.  From there it was downhill all the way.  We got back at Mangatepopo Hut at 1330, four hours after leaving Oturere Hut.  Andrei had the billy on so with a hot cuppa we had lunch before getting back on the road for home.

Despite the rain and lack of visibility of the lakes, along with not getting any crampon practice, the trip was still great.  Individually we would have all got something out of the weekend that would broaden our backcountry or alpine experience.  It might have been gaining familiarity with the Crossing’s poled route, or what 45+km/h winds and a negative wind chill factor is like up at Red Crater, or perhaps simply a greater appreciation why the Crossing is considered an alpine walk.  Whatever we take away from these trips it’s likely to be richer having experienced it with others.

Thanks to Dan for leading this trip.  He’ll be seeing us again.