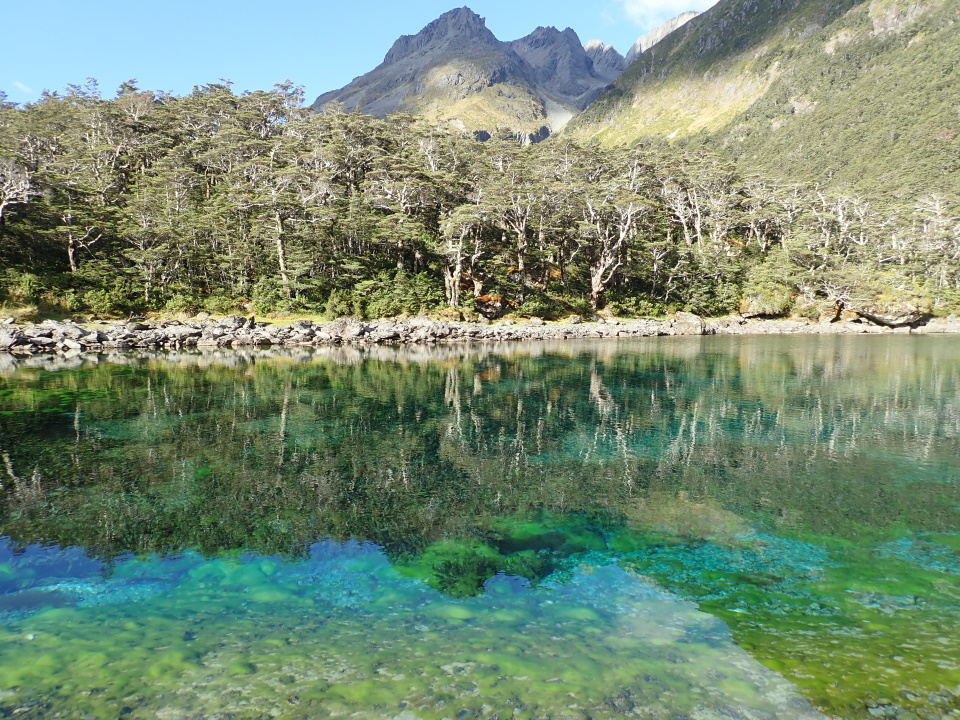 Our target for the weekend was Blue Lake Hut, nestled in the Nelson Lakes National Park next to reputedly the clearest water in the world – Blue Lake with 80 meters of visibility. Walking in and out on the same track, we conservatively estimated eight hours of tramping each day.

Our weekend jaunt to the top of the South began on the Interislander on Friday night, as Daniel did his best to save six prime seats (to the increasing glare of many other ferrygoers), while the rest of the group battled through traffic to get the club van onboard. Once underway, the crossing passed quickly as we shared stories of our different tramping experiences, and marvelled at our fearless leader Juan’s ice cream addiction (at least two for dinner!)

Arriving in Picton, we navigated the road that will be familiar to many a WTMC group, barreling through the dark to arrive at the Lake Rotoroa Campsite at about 10.30pm. Light rain greeted us, but we quickly set up our tents and slept.

The next morning we were joined on the 8am ferry to the top of the lake by a group of local trampers, who we’d see again at the hut that night. Deposited at Sabine Hut, we started walking up through the valley. The terrain was varied, and we passed through gentle forest tracks, meadows and across rocky scree, all while Mount Franklin looked down on us. We couldn’t have asked for better weather, although the track was more technical in places than we had expected.

Arriving at Blue Lake Hut in good time, we set up camp and went to enjoy (see but not touch!) the lake in the late afternoon sun. Lukas headed further up the track to take in Lake Constance (and feel like he was back home in Germany,) while we got to work preparing dinner, Gluten Free Satay Noodles, courtesy of the club cookbook.

We headed to bed early, knowing that we’d be leaving before dawn to have a chance of getting our eight hours of walking in, plus lunch stop, before our 2.30pm ferry back to Rotoroa Campsite. We’d be leaving Anne here, as she had wisely taken the Monday off work to do more exploring in the park.

Heading off before 6am with head torches on, we meandered back down the valley. The going seemed faster and even though we were walking the same track as the day before, heading in the other direction still made it feel new and interesting. Daniel’s left knee decided to seize up with about an hour to go, but fortunately we’d made up enough time earlier in the day to still make the 2.30pm ferry.

From there it was simply a case of killing all the sandflies that tried to hitch a ride in the van with us back to Picton. Juan made the difficult decision about which ice cream flavours to sample for his dinner, before we made it back to Wellington, pleased with a weekend of great walking with great company. Many thanks to the group for making it so, and to Juan for his organisation and sorting out logistics.