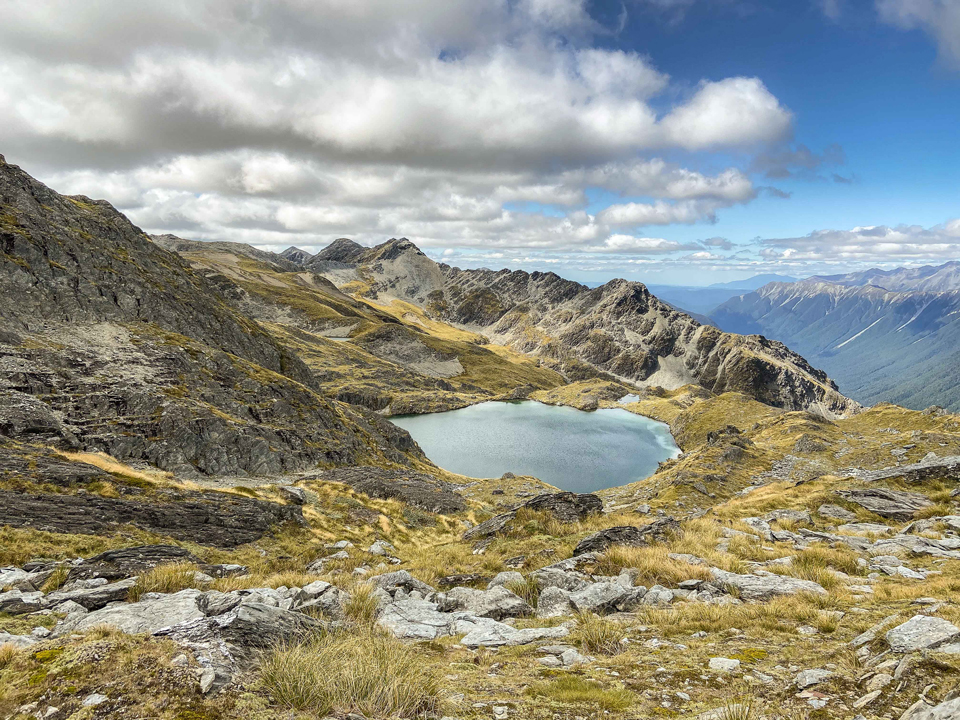 The first club trip I led was to Mole Hut in Nelson Lakes a few years ago, where we spent a really enjoyable day exploring the Mole Tops. When we were up on the tops I remember looking south along the Ella Range and thinking that it looked inviting to head along the range to see what was there.

I didn’t immediately do anything about the idea, and it wasn’t until the 4-day Waitangi weekend this February that I got the opportunity to try an Ella Range traverse. After studying the map I worked out what looked to be a doable 4-day loop with two of those days spent on the tops.

There are not a lot of trip reports about the area but I did talk to an experienced club member who had done a similar route to what I was planning, so I was reasonably confident that it would work – weather permitting. There were a few other people keen to join the trip, and we joined Juan’s EM group in the van to get on the ferry on the Wednesday night.

There had been a mix-up with the ferry booking and we were on the 8 pm ferry rather than the usual 5 pm sailing. As the ferry didn’t get in to Picton until 11:30 pm we decided to stay there the night rather than driving any further.

After an uneventful trip and good night’s sleep we were on our way in good time on Thursday morning. We met up with Simon (the 5th member of the group who was based down in Nelson) at the Mangles Valley Road turn-off, and after dropping the EM group off at the start of the Tiraumea track we headed down to Mt Ella Station, and started walking along the Lower Matakitaki Route at 11:00 am.

The walk along the Matakitaki River was pretty uneventful and we got to our route up on to the tops, the McKellar Stream Route, at 3 pm. My original plan had been to camp in the basin at the top of the bushline, but it was slow going. The route is obviously not heavily used and is overgrown in places, requiring on more than on occasion some backtracking to re-locate track markers.

At 6:30pm we eventually got to nice clearing (at 1,040 m) with some flat space next to the stream, and instead of pushing on for another hour or so we decided to make camp there. After setting up the tents and a quick meal of Moroccan couscous it was a relatively early night, with everyone looking forward to getting up on the tops the next day.

Friday dawned to clear skies and light winds and we were on our way just after 8:00 am. It took just under an hour to get to the end of the track, where we were greeted with fantastic views up to Mt Ella and across the valley toward the Emily Peaks. Looking at the terrain above us the best way up onto the top appeared to be up the scree slope to the small saddle just to the west of point 2105. So we started climbing. The scree was reasonably well consolidated so it wasn’t particularly difficult and we made slow but steady progress reaching the saddle at about 12:30.

Unfortunately, when we got to the top we had a few glimpses along the range and then the cloud rolled in. This resulted in a bit of discussion over lunch about what to do if the conditions stayed that way (no-one was particularly keen to go back down the scree slope). However, it soon cleared up and we could see a possible route along the western side of the main ridge.

We dropped down into a nice basin just north of point 2105 which had plenty of flat ground and a nice stream – and plenty of good camping spots. But to keep going we had to get over or around a ridge coming down from point 1972. The scree slope going up to the ridge looked rather steep from a distance, but as we got closer we saw a couple of deer up on the ridge and there was actually a fairly well trodden track up the slope, obviously frequently used by them.

From the ridge there was a fairly straightforward route along the western side of the main ridge until just south of point 1916, where crossed over to the eastern side and got a first glimpse of the tarns where we were planning to camp for the night.

We found a reasonably good camping spot near the outlet of the southern tarn. The views of, and from, these tarns were the highlight of the trip and made the grunt up the McKellar Stream route worthwhile. After setting up camp and enjoying another meal from the club recipe book (satay noodles) we enjoyed a beautiful evening with light winds and stunning sunset over the Mahanga Range across the D’Urville Valley.

We woke to another fine morning with light winds on Saturday. However, the forecast was for some rain in the afternoon so we were on our way in good time. Up until that point travel along the tops had been relatively straightforward with a small amount a scrambling in a few places. So I was fairly confident that we would be able to get to the Mole Tops that afternoon. Even if we didn’t there was the option of stopping at the tarns south of the Mole Tops or even heading down the Watson Creek Route if the weather wasn’t suitable for staying on the tops.

As we climbed up above the campsite to the main ridge just south of point 1860 we got a fantastic view back over the tarns and the cloud rising from the D’Urville Valley below. From the main ridge the route along the western side of the range did not look very inviting so we dropped down and sidled along the eastern side of the range past point 1870 until we got to the ridge coming down north east towards point 1515.

This was where we got stuck. Looking north we could see an inviting tussock slope leading up from the basin below us to the tarn north east of Mt Watson, and from there what looked to be a reasonable route up towards point 1785. However, the tricky part was going to be getting down into the basin as the northern slope of the ridge we were on dropped off very steeply. We spent a bit of time looking for a route down to the basin we just couldn’t find one.

So we sat down and discussed our options. As we couldn’t keep going along the eastern side of the main ridge we could have back-tracked and climbed up to the top to investigate options for going along the western side (although this hadn’t looked very promising earlier in the day). However, by now it was the middle of the day it was going to take a while to back-track and there was rain forecast for the afternoon so this option was discounted.

We eventually decided to bush-bash down to the D’Urville Valley and head down the valley to D’Urville hut for the night even though this put us on the wrong side of the range and would mean a long day on Sunday to get back to the van. After having some lunch we set off down the hill generally relieved to be getting off the tops given the position we had been in and the threat of bad weather.

We chose to descend the ridge almost directly west of point 1870 and down to about 740 m it was really good going, not too step and through mature open beach forest. However, the last 140 m were tougher travel. It was steeper than the contour lines appeared, particularly compared to the supposedly steeper sections further up.

There was also considerable regenerating scrub – so we did end up doing some proper bush bashing, eventually getting to the D’Urville Valley track just after 3:00 pm. From there it was a 5 ½ slog down to D’Urville Hut, including a brief stop at Morgan Hut just as the forecast rain arrived.

Arriving at D’Urville Hut just as it was getting dark, I expected that the hut would be full with the long weekend and the forecast for (mostly) good weather. However, there was only a family of four in the hut so we all grabbed bunks had a quick dinner and went bed.

Although we were all relieved to get to the hut after a long (13 ½ hour) and challenging day, but knew that we had a ferry to catch the next day and still faced another long day to get back to the van in time. So on Sunday we were up at 5:00 am and on our way at 5:30 am. The initial step section of the climb up to Tiraumea Saddle soon woke everyone up, and we were at Tiraumea Hut by 8:30 am.

It was another beautiful day and under normal circumstances it would have been an enjoyable walk out. However, as we still had a fair way to go and were under some time pressure to get back to the EM group and the van it was more of a heads-down slog with only the occasional short break. We made it back with a little bit of time to spare and even had time back in Picton to fill up the van and grab junk food for the trip back before getting on the ferry.

Although the trip turned out to be a crossing rather than a traverse and we ended up doing two quite long hard days we still got to experience some spectacular scenery and views on top of the Ella Range.

And at the end of the day we had an adventure we can look back on with rose-tinted glasses.