Kapakapanui (1102 m) is known for its fine views across Kapiti and into the Tararuas and our group of five was looking forward to seeing it for ourselves. With Kapakapanui being so close to Wellington (inland of Waikanae), we had a leisurely start and left from Wellington Railway Station at 9am on Saturday and then stopped at Paraparaumu for coffee. The weather was cloudy, but pleasantly warm when we reached the Ngatiawa road-end.

The walk to Kapakapanui is on a loop track and we decided to take the shorter (clock-wise) route to the hut. From the road-end to the hut is around 4.3 km and expected to take 3 to 4 hours, depending on fitness. Our walk began first through paddocks and then criss-crossed the Ngatiawa River. There were maybe 8 to 10 crossings so there was no point in trying to keep our feet dry. Most crossings were only about ankle-deep, though one was knee-deep and swifter-flowing. 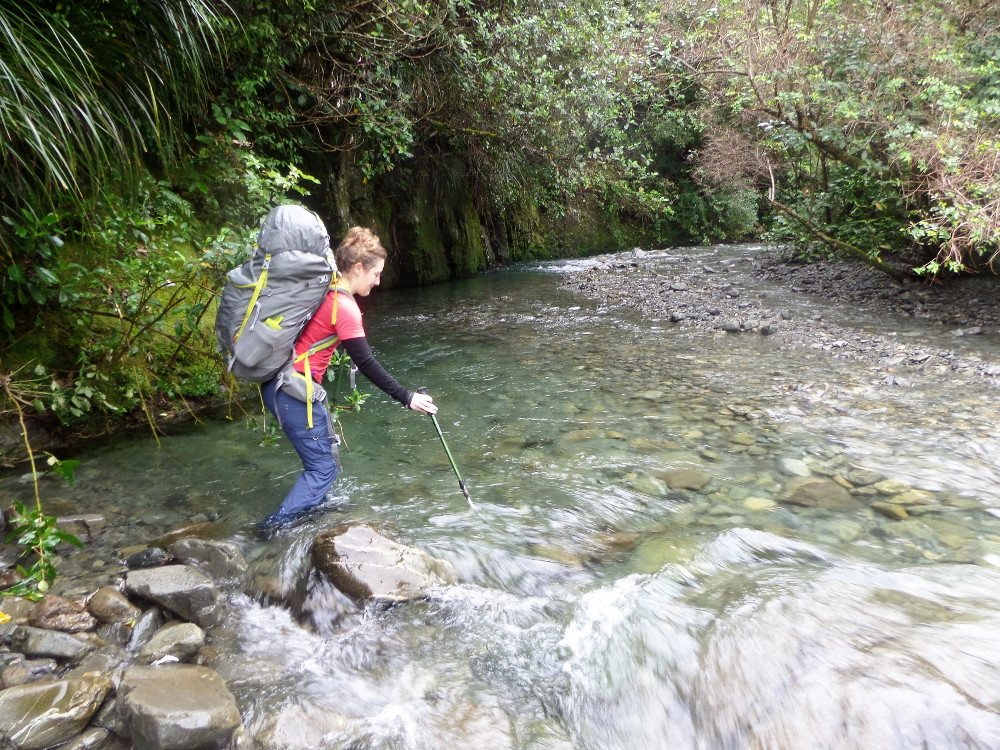 After the river section, we began a fairly steep climb through trees and ferns with occasional glimpses of the view. As we moved higher the weather became misty. We stopped for lunch along the track, then continued climbing, but less steeply. The weather was calm but misty and the track somewhat wet. There were lots of birds about and we saw two kereru. 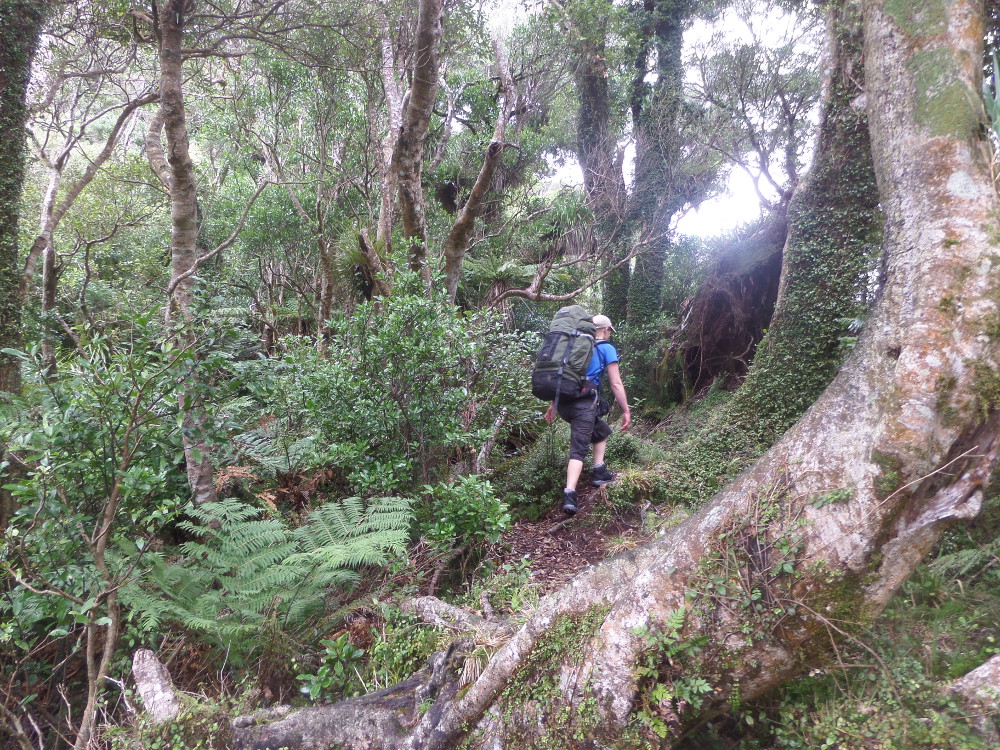 We reached the hut around 3pm. At this altitude (820 m) the weather was very misty. Kapakapanui is a standard DOC hut with 6 bunks. The hut was empty when we arrived but there was a note in the hut book from Tony and Debbie who had headed on to Renata hut. 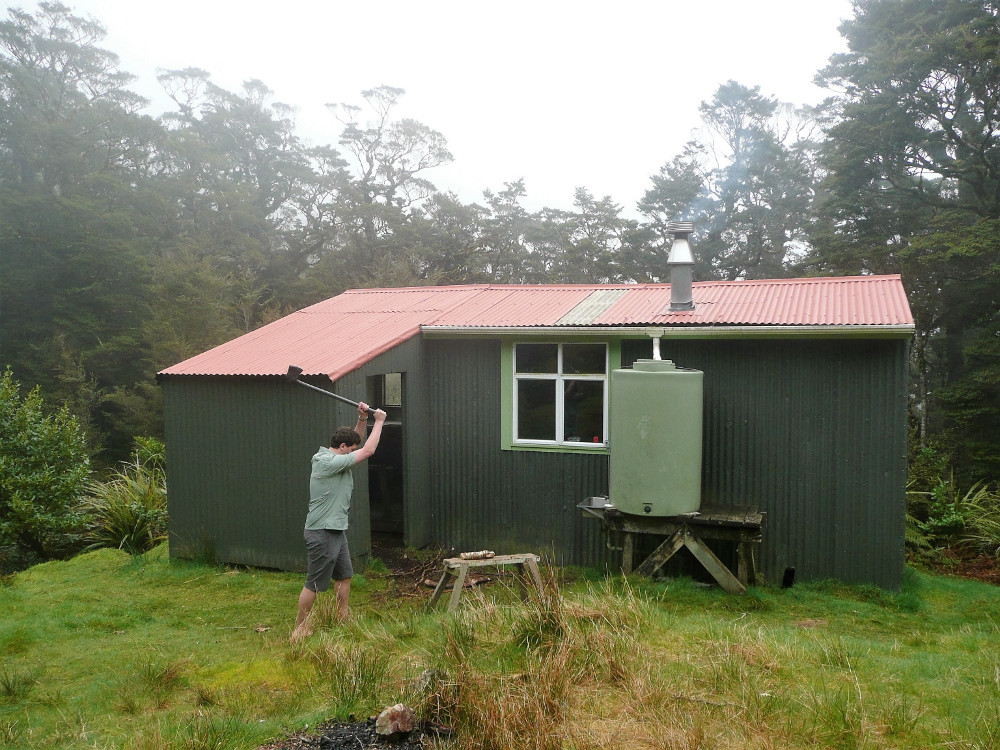 There were occasional showers during the afternoon and overnight. We spent some time getting the fire going, but it wasn’t easy. The firewood supply was mostly damp, and the lack of wind didn’t help. Some keen people went to work on cutting the wood into smaller pieces. Eventually, with the door open and careful attention to kindling placement, it began to produce some heat. Then we played cards, a very close game of Down the River, Up the River.

Three newcomers turned up around 6pm. They had brought ukeleles and we enjoyed hearing their pleasant tuneful voices. Dinner prep began for Chilli Cashew Tuna Rice Noodles with (lots) of vegetables. After dinner, all 8 of us sat and talked. Rachel very kindly gave up her bunk to one of the other group. The fire gradually went out due to lack of attention, but it wasn’t particularly cold.

We left at 8am, after replenishing the firewood supply, and began the walk along the ridge up to Kapakapanui (1102 m). Because of Saturday’s rain the track was noticeably wetter. We passed through the eerie, green, goblin forest before emerging into an open area near the top. Sadly, but predictably, there was no view whatsoever, just white mist. And rain ripping across our path. 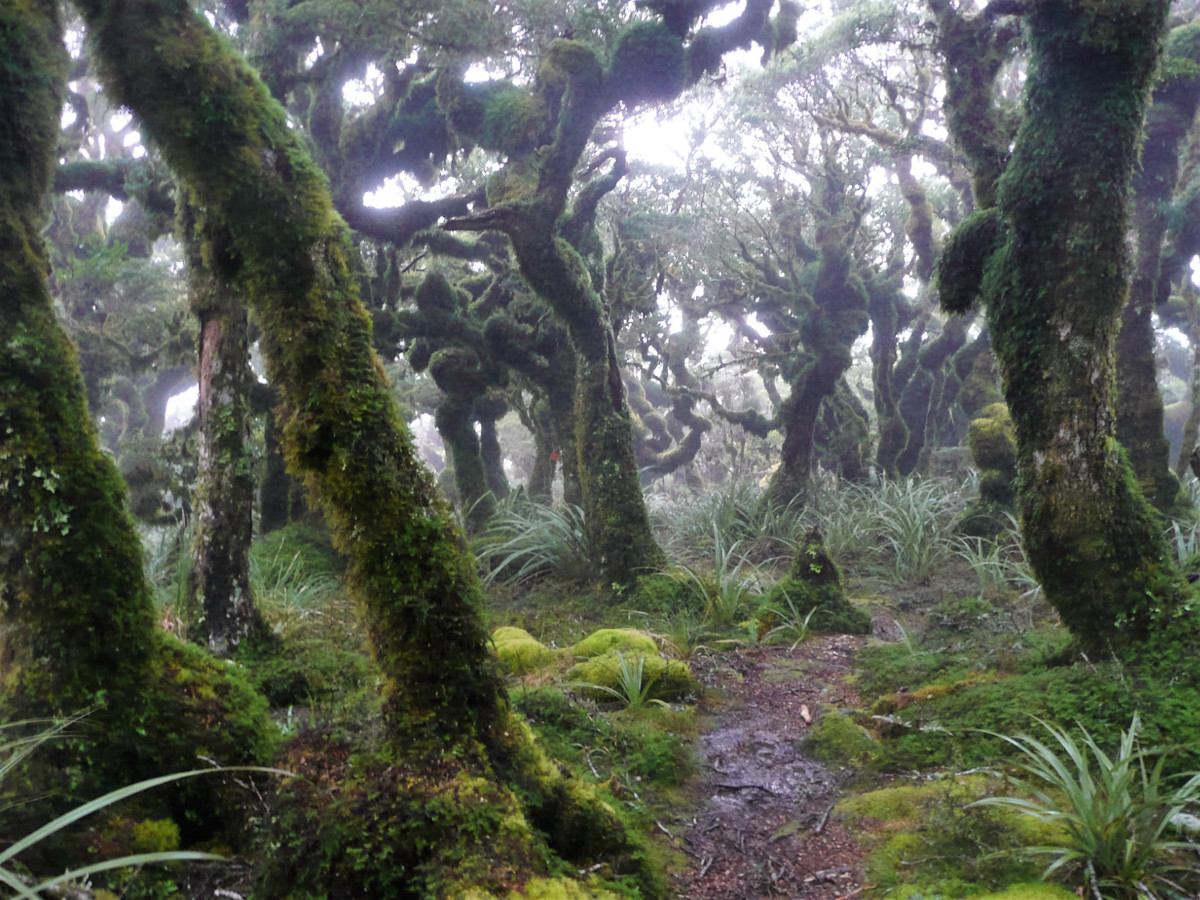 On the downhill there was a fair bit of slipping and sliding on the way to a below-the-mist lunch break. Then back down to the river and all those crossings revisited. We ended with very wet boots, but they were much cleaner than usual at the end of a tramp.

Sunday’s walk was around 6.8km and took about 4.5 hours. We enjoyed a pleasant stop for coffee at Reikorangi Pottery Café before heading back to Wellington. Hope to see the view one day! 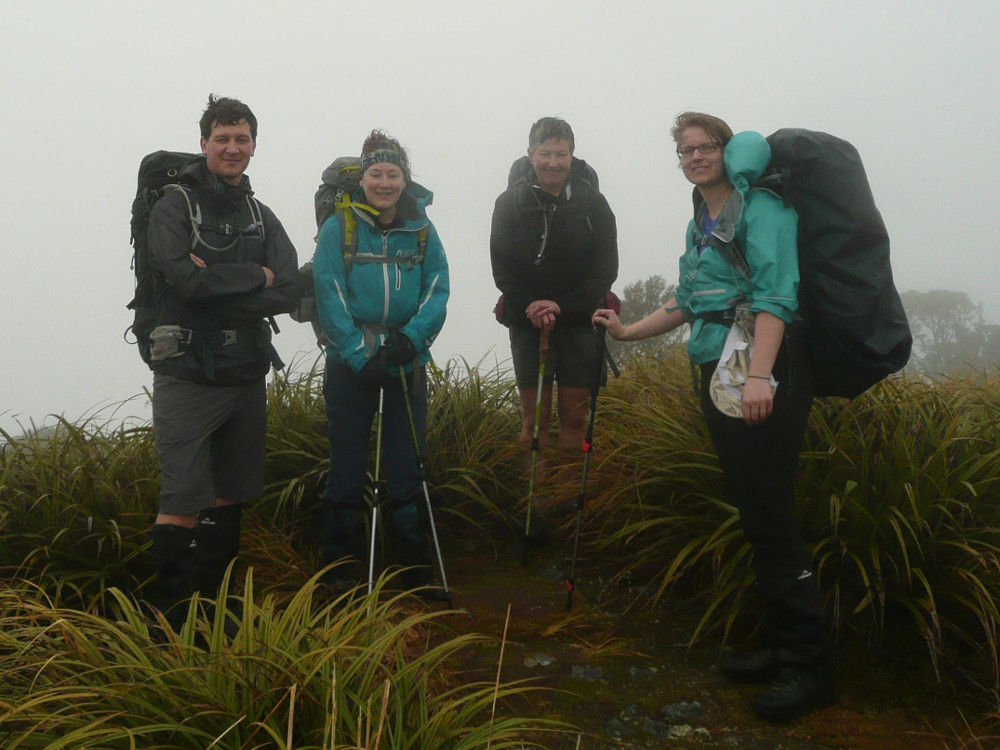