The Kaikouas are an impressive sight from Wellington’s south coast on a sunny winter’s day. Several times most years WTMC groups try and climb one of the large peaks that appear too rise up out of the sea. On one such trip in early October our objective was a 1870 metre peak simply called ‘Snowflake’.

A late withdrawal reduced our party to four. After a rough ferry crossing in a strong southerly swell we overnighted in a pleasant DOC campsite near Kaikoura town. Saturday dawned cool and cloudy as we headed up the rather dull 4-wheel drive route that meanders up the Kowhai River. Soon we were on a walking track, crossing the river from time to time, and things got more interesting.

After a couple of hours we turned up Snowflake Stream. From the map it didn’t look far to our destination from there. The cloud had cleared and it was getting warm. We stopped several times to enjoy the sun. The travel was easy but soon the stream got steeper and the boulders bigger. The water was full of tiny gravel and sand. The resulting restricted visibility made the numerous stream crossings tricky as there were hidden slippery rocks and unexpected holes to negotiate.  Our progress slowed markedly.

At one point a submerged branch leapt out of the water and attacked me, although my tramping companions claim I actually slipped and fell. I wasn’t the only one to do so, and Sharon tried to compete with my scratched and bloody face by acquiring a large bruise on her thigh.

Despite our various injuries the travel was challenging and fun. Tony Gazely had done this trip three times before and provided trip leader Fiona with a map and instructions. Most of the instructions concerned getting around waterfalls. “The first waterfall in Snowflake stream is a big one. Climb 20 m or so up a slip on true right about 40 m downstream from the waterfall. Look on your right for an animal track (not easy to find). Follow around steep spur and drop back to stream. Not too difficult.” 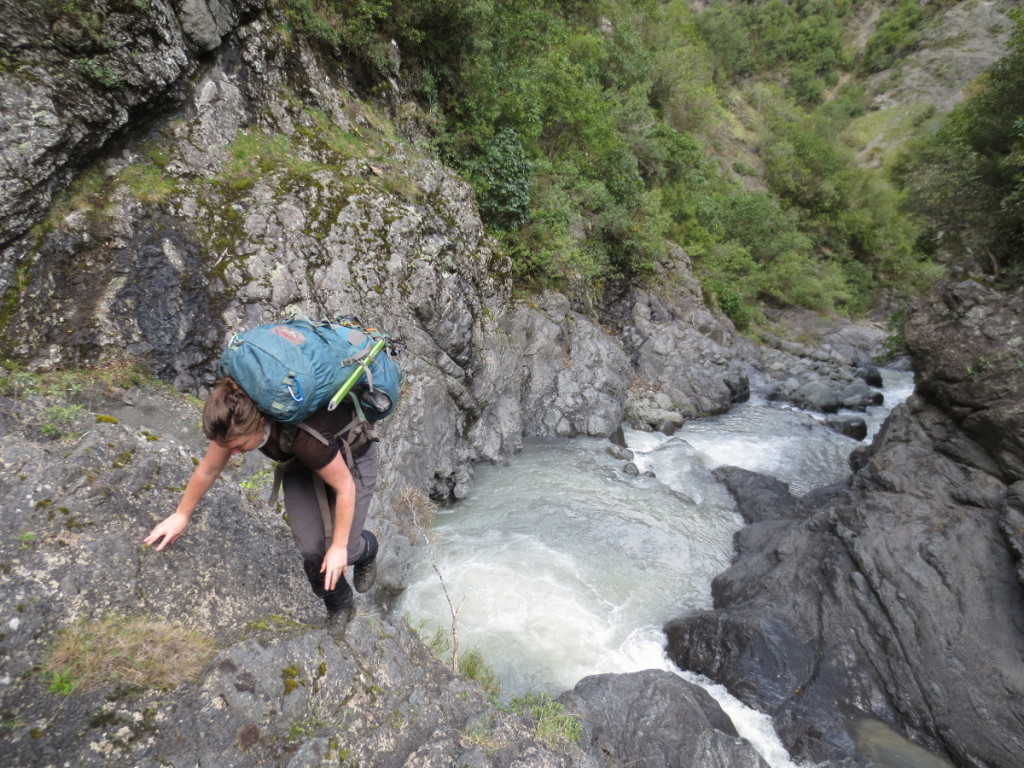 We found ourselves on a steep slip above the stream, trying to work out where to go next. Fiona scouted around and eventually found the route, although it was far from obvious. Soon we were high above the falls.  Now we had to get down again. It looked impossibly steep but was surprisingly easy. In no time we were taking photos from the top of the waterfall. Tony’s instructions came through!

The next waterfall had an excellent rock face on its left, which provided a fun climb on solid rock with plenty of handholds. The final waterfall had two options: a steep rocky climb beside the falls or an easy bush sidle. Fiona and I chose the former (great fun) while Sharon and Harry sensibly chose the latter.

A little further upstream we found a large sunny clearing to dry wet gear, with a decent site for one tent and a good tent site in the nearby bush. At 700 metres there were thankfully only a few sandflies.

Sunday morning we were away shortly after 7 am to climb Snowflake, beginning with what Tony described as “a steep bush-bash”. A steep and surprisingly fun bush-bash as it turned out. We followed pig trails much of the way, and eventually emerged onto a gentle grassy spur. It didn’t stay gentle or grassy for long, and the next hour was a steep climb over rock and shrubs. It started to snow and was getting cold. We were still following pig trails and there were pig droppings even at 1600 metres.  The others were sceptical about my theory that the pigs liked to climb the mountain on clear sunny days. In the end I didn’t to confirm my theory, as Sharon was getting very cold and Fiona decided we should turn back.  I wasn’t too disappointed as it was too claggy to see much from the top.  The pigs wouldn’t have bothered on a day like this.

When we returned to camp it was cold and at lower altitude the snow turned to light rain. We were soaked through. After a brew we retreated to our tents to warm up. The rain got harder but had stopped by around 6 pm, just in time to prepare dinner. After some yummy pasta and a desert supplied by Harry we headed back to our tents, giving me the chance to tackle the Listener crossword.

Monday morning dawned clear and sunny with frost on the ground. The rain hadn’t affected Snowflake Stream much and we made swift progress. Harry hadn’t tramped in a while and seemed a bit lethargic much of the weekend. But on a lovely spring day he got his tramping mojo back and charged ahead, leaving us in his wake. When we reached the van it was summery warm. We stopped off to view the seal pups but found just one pup lying on a rock. After a café stop we headed for Picton. The snow-capped Kaikouras looked magnificent in the sun.  If only we had been climbing today!  But it had been a great weekend and Snowflake will still be there another day.