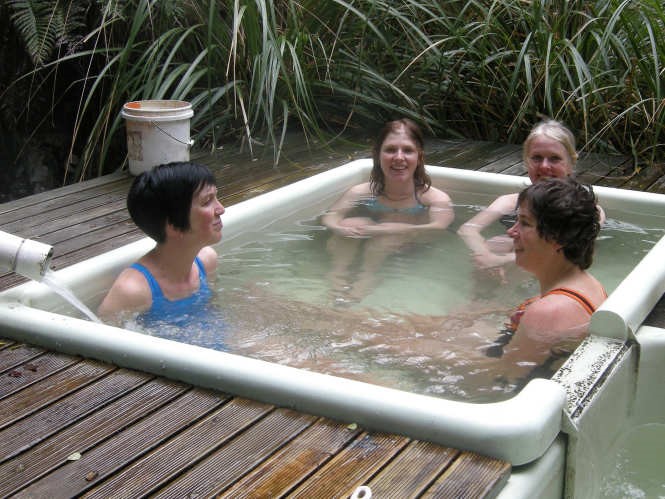 This was the third time I’ve gone to the Kaweka Hot Pools, or the Mangatainoka Hot Springs as they are more properly known. My introduction to the Hot Pools was back in 2005, doing an Easy tramp with Helen McDermott. Then two years ago I led a Medium tramp to Ballard Hut and the Hot Pools. This was one of the best tramps I have ever done – the small Ballard Hut is set in a beautiful location at the bushline of the Kaweka tops.

Normally these tramps are run over 3 days, but this year for some reason they were squashed into a weekend. This was no problem for the Easy tramp, but there was no way the Medium group could do Ballard Hut and the Hot Pools – that would be a Fit trip.

We left town a little after 5pm and stopped for dinner in Levin. I prefer to avoid the Rimutaka Hill Road at this time of year if possible. So it was through the Manawatu Gorge, then a change of drivers in Dannevirke, and we were driving the last road (Makahu) shortly before midnight. A long drive, yes, but I was okay with it – not having tramped for 3 months and being very keen to head far out of town and into the hills!

About half way along Makahu Road there is a ford with a big warning sign before it. There was heavy rain before the weekend, and the river was flowing swiftly over it. Both Easy and Medium groups decided to wait until morning, and flies were set up on grassy areas before the ford. It was a very cold night, and there was frost on the fly in the morning, and all over a pack that had been left out! Unfortunately, the river had not dropped during the night, and was splashing on the marker pole slightly above where it turns from white to red (meaning don’t cross). There was much analysis and discussion at breakfast time. John Hoffeins and his Medium group showed up, had a look at the ford, and more analysis and discussion followed. In the end we decided the consequences of a van ending up sideways in the river were too severe to take the risk. We parked the vans where our fly was and the river was forded on foot. 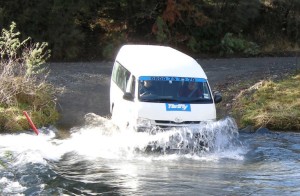 Ahead of us was a 2 hour road walk through farmland, before we even got on the track, and it was looking like a big day for an Easy group to get to the Hut and hot pools. Shortly after the road walk began, the shape of our weekend was about to change dramatically when a van, very similar to ours, came driving up the road. The driver said he had no problems crossing the ford, so two of us returned to the van and forded the river no problems. We passed the Medium group who were at the end of their road walk, they could only take comfort in the fact that they would have an easy way out.

So the tramp finally began from the road end car park later in the morning. The flattish track to Te Puia Hut is a nice stroll next to the Mohaka River with some dramatic rock faces to admire on the way. When those of us at the back arrived at the Hut we found the advance party had left their packs in the Hut with sleeping bags spread out over the mattress. They had gone to the Hot Pools, a further 45 minutes away. I had said in the trip plan that if the weather was good we would fly camp next to the hot pools, and the weather was actually okay, but I felt there could have been a mutiny if I had insisted that an Easy group spend a second night under a fly in the middle of winter, so the hut it was. I have to admit it was good to have a soft mattress in a warm hut and even the Medium group shared the hut with us.

We all enjoyed a late afternoon soak in the hot pools and returned to the Hut to make dinner. Dinner was Beef Stroganoff, which was made using a blend of Maggi’s instructions and the recipe in the club recipe book. The resulting stroganoff was very tasty, if I might say so myself.

The next morning we returned to the car park on the same track, and again the group became very spread out. At the car park there is another hot spring, which is inferior because you cannot adjust the temperature. Some of us had a second dip here, it was a very warm pool, and when I got out my muscles told me they did not like the sudden change in temperature. A couple of the Medium group took my van back over the ford to collect their van, and then drove both vans to the road end. I discovered after getting out of the hot pool that a few of my group had gone home in John Hoffeins’ van – personally I couldn’t understand the hurry to get back to town. Lunch was had at the road end, which is a very nice picnic area to bring your family for the day (if you live in Napier). I could have stayed longer, but the others were ready to go, so a bit reluctantly I got behind the wheel, and we left at about 1pm.

I look forward to seeing this tramp on future Winter Schedules – it certainly is a classic Kaweka tramp.