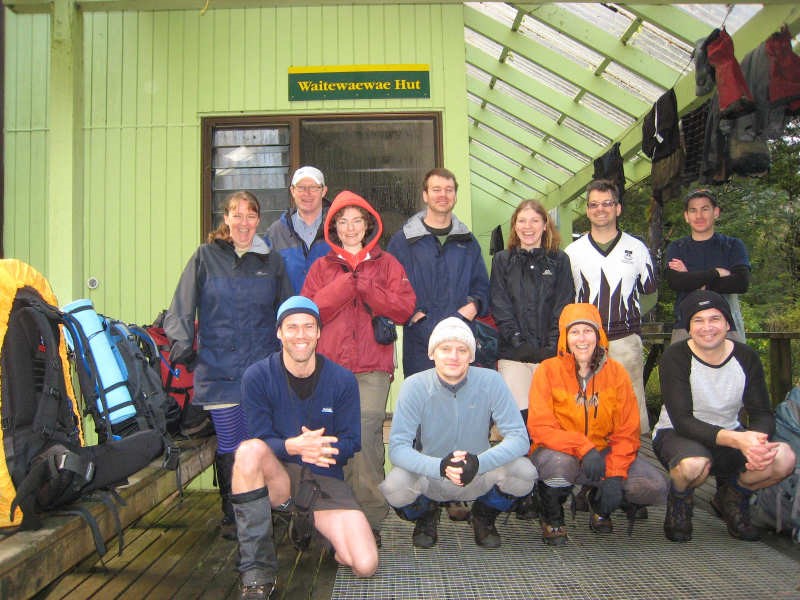 After a wet week in Wellington I imagine everyone in our group was looking forward to getting away from the town and out into the Tararuas. For some reason I have never tramped in the Tararuas before and I was keen to have a look for myself after seeing many club night photos of popular Tararua tramps. I have to say I was not disappointed – I saw the Tararuas in glorious sunshine and heavy rain that left a mist hanging through the trees.

We left from the train station at 8am on Saturday and picked up our last person at Porirua on the way to Otaki Forks. The weather was pretty good and after a few quick stretches at Otaki Forks we started our walk in brilliant sunshine. This was to be the only time I wished I had packed my sunglasses though. We walked over the lovely bridges and into the bush. We were the first group through for the morning – I know because I was first over the swing bridge and collected many spider webs on the way over.

The track was lovely – a gorgeous mix of pungas and regrowth bush with a lot of variable terrain. We followed a stream up the hill and we were in and out of it many times. The river rocks were smooth and sometimes slippery but I think we only had two people take an unexpected deeper dip than usual. The track itself was full of tree roots and I did encounter some of the famous Tararua mud. I ran out of energy not too long after negotiating the active slip area. This was very exciting as we had to clamber up a slippery bank around a huge slip using a few tree branches and roots. My new Macpac pack sat snugly on my back as I gave it a good workout in stability – leaping through the undergrowth like I was born in the jungle. Well, in my mind. In reality I was covered in mud once I got to the top of the slip and my arms felt like they had stretched a few centimetres. It really was good fun but sapping – I should have snacked more regularly on my chocolate and nuts after that episode.

Past here we followed an old log hauling trail where there were often remnants of rail tracks we were walking between. Fascinating to think about them building all that infrastructure in the middle of nowhere to haul out the magnificent huge trees. This insight into historic logging culminated in seeing a huge, iron monster of an engine on the side of the track. We spent a lot of time speculating on this contraption. Did they bring it in on those tracks they had to lay? Did they bring it in piece by piece and assemble it onsite? We discounted helicoptering it in for obvious reasons but that would have been the preferred modern option. Every other option seemed like too much hard work. We left with lots of photos.

When we popped out of the stream bed up onto a plateau, we spent a wee while walking on track that was pretty flat before heading off down another stream on the other side of the hill. About this time we were passed by a university tramping group and the heavy rain started. This section of track went down to the Otaki River where you could take a dry weather option up the river itself, or climb up to a ridge and around to the hut on a track. Taking the wet weather version we were surprised by a new slip exposing lots of nice, grey, very sticky, clay around the root ball of a massive tree. We used stringy but strong tree roots to sidle around it and managed to get away without getting covered in clay.

The Waitewaewae hut was a welcome sight and it was light, airy and warm. There seemed to be loads of space and our team members had a brew on already and I found a good sleeping space on the roomy top sleeping platform. We chatted as night set in around the fire and then around dinner. Steve organised a lovely Thai tuna green curry and that was followed by chocolate biscuits. The pita bread with garlic roasted over the pot belly stove top was a huge hit. Steve chose the dinner table benches as the best sleeping location – he pushed two benches together and slept there.

We all slept very well that night – there wasn’t a lot of snoring or anything. Breakfast might need some minor adjustments on my part. I was not overjoyed with 4 Weetbix with my milk powder made up to resemble milk – mostly. I surreptitiously checked out my fellow trampers breakfast options. Someone had toast, someone had One Square Meal bars, some had porridge and some, rather sensibly I thought, had kept leftover tuna green curry with loads of rice. I think I might check out the leftover option on future tramps. Very tasty and it limits the amount of leftovers you have to pack back out after over-estimating the amount of rice 10 people can eat. I heard mention of previous trips people were on where they had to carry full billies of cooked rice back out.

My pack did get a bit lighter on the way out after the veges and tuna had been eaten and we all left excited by the river option back. About 50 m back down the track from the hut, we diverted into the river itself. After a few steps in the Otaki river, the numbness stopped the bone-chilling cold from hurting. Oh – I needed my polarised sunglasses here once more so I could see the river bottom and avoid those big, mossy, round stones. No one fell in however so it must have been a good option and we continued to wander down the river for about 800m or so before cutting back onto the track and following our route from yesterday back to Otaki Forks. You had to make sure you kept an eye out for the orange tag showing the track back into the bush on the true right bank as it would be easy to miss. Although as Steve pointed out, the river does flow past the carpark eventually. Perhaps inner tubes rather than packs for that idea. And not in winter. Brrrr.

I really should have stretched a bit more upon our arrival back to the van. By the time we got out at the Red Cafe to have some tea my muscles were getting stiff. The cafe had some nice food to satisfy our appetite and we got back in the van for the trip into Wellington. I did spend the next few days cringing when I climbed some steps and my legs remembered the weekend’s activities. But as they say, that kind of a feeling is a great reminder of weekend fun!