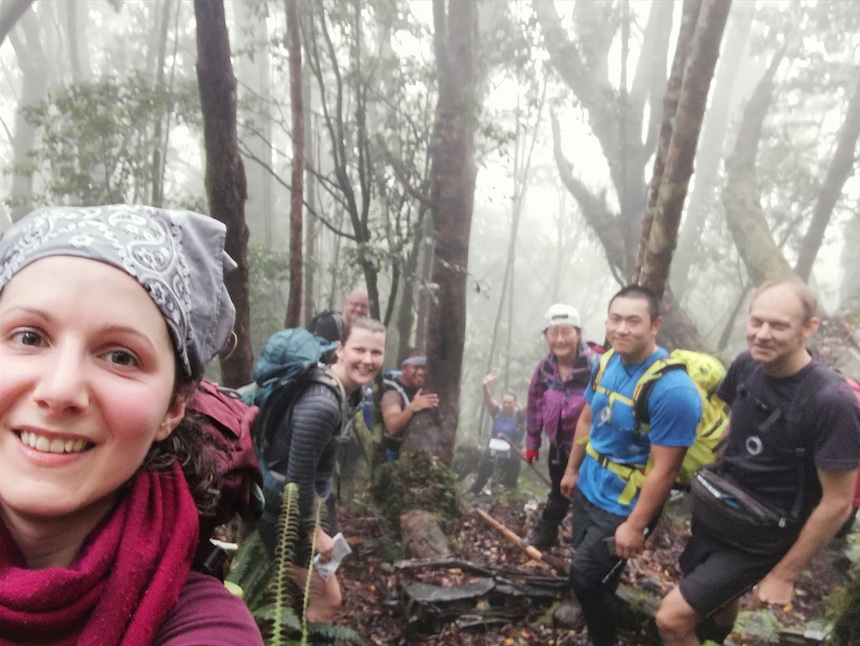 Somewhere on the western side of the Tararuas, between the more popular spots around Otaki Forks and Poads Road end, is a selection of old meandering forestry tracks that go nowhere in particular. One of these, for reasons unknown to the author, is called the Mick Track. The Mick Track offers up the standard Tararua serving of bogs, river crossings, sweaty climbs and steep descents. However, as this was a navigation trip, we had the added excitement of a few wrong turns along the way!

Strictly speaking, access to the Mick Track comes from an unformed legal road off Waitohu Valley Road. It follows the route of some power poles across a neighbouring farmer’s land (see the Walking Access Commission website). It then joins up with an established gravel road track to the edge of the Tararua Forest Park. However, access over the quarry land is much more straightforward, and I rang the Thursday prior to our trip to ask the quarry owner’s permission to walk down the quarry road.

At the end of the gravel road is a bridge, and the Mick Track begins on the right just after. I had talked to the more experienced among my acquaintance and scoured the internet for blogs about the state of this track, as although it is marked on the map, it is not maintained by the Department of Conservation. As an amateur navigator, and a bit of a princess, I was not ready to get lost in a boggy, dank, forested abyss. My research had prepared me for the worst. However, I was pleasantly surprised at how easy the going was. Yes there were boggy puddles and stream crossings, as well as pushing and poking by tree branches who unhappily got in my way, but on the whole the Mick Track is reasonably easy to follow as long as you keep your wits about you. (Disclaimer: I did not keep my wits about me on this trip).

The section along the Waitohu Stream begins as a vehicle track. After about 20 minutes it slims down to a route through the grass. Although it zigzags over the Stream (I remember at least three distinct stream crossings), there always seemed to be an identifiable footpath through the grass ahead.

Cue loss of wits number one: full of confidence due to a scouting trip I had done two weeks prior, I turned North and boldly led my group up a ridge too early. We walked for about 15 minutes before I halted the group and in a Gandulf like voice said “I have no memory of this place.” Thankfully everyone was a good sport about this first blunder, and after some morning tea we backtracked down to the river and picked up the track again. To avoid making this mistake in the future I would advise following the grass along the true right of the river as far as it goes, before heading into an entry in the bush. From there it is about 10 minutes of pushing through the bush along a steep bank next to the river. This will deliver you to an open-ish area  where someone has kindly tied two pink ribbons to trees. These ribbons indicate that you should climb down and over a side stream, and to the place where the Mick Track truly starts to climb.

From this point, the track was very obvious. Apart from the intermittent pink and orange ribbons pointing the way, the track is a scoured out channel that follows the ridgeline. This left me plenty of time to focus on my huffing and puffing to climb the 600 or so meters up to the Mick.

At approximately 690 meters spot height, there is a surprise for aviation enthusiasts – the remains of a Lockhead Venture Bomber that crashed at this site in 1949 (at least that is what my blog research said). This was a welcome break from the climb. Someone has kindly left some plane parts on the track to mark the place where you should descend in a south-easterly direction (although Tony questioned the accuracy of this clue!) to find even more bits of plane, a wing, and perhaps an engine.

After the plane crash site, it is easy to lose the track. However, the advantage of navigating up a ridge is that you just need to aim up and you’ll get there. We eventually got back on a small foot track, not nearly as obvious as the one we had been following up until that point. On reaching level ground I smugly watched as my group (except for Tony) toddled off in a Northerly direction, following a comfortable trail of multi-coloured ribbons. I eventually called out to them to stop and have a look at the map. Our intended track led us South towards Tangata Maunga, so we needed to head in the opposite direction. While this statement might have indicated I have some insight when it comes to navigating, it was only because I had made the exact same mistake two weeks prior on my scouting trip that I was able to point it out to the group!

We arrived at the Mick (point 877) with only a lonely walking stick stuck in the ground to greet us. As is custom with many of these spot heights, there was no welcoming green and gold sign, or any sign at all, to confirm that we’d made it. We just had to rely on GPS altitude and coordinates. However, we had made good time (arriving at Mick at 1.30pm, 5 hours after starting) and we celebrated with a group selfie.

Our next target was Tangata Maunga, at a height of 912 meters, where the white spot on the map offered the hope of a clearing and some views. At times there seemed to be a bit of a foot track across the top, with the odd ribbon or piece of metal nailed to the tree indicating that a track did exist. However if you took your eye off the ground for even a moment the route disappeared and you were left stumbling over tree fall and dead wood. We took turns walking at the front and following the compass bearing. With impressive speed we passed point 874 and arrived at a line of leatherwood that I recognized as being just below Tangata Maunga. Enthusiasm overtook me, as I thought we had accomplished the hard bit, and it would be an easy amble from here down to the vehicle track and back out to the quarry. Cue loss of wits number 2.

We had spotted a couple of weathered pink ribbons that I thought I recognized from my scouting trip as leading to a foot track. We took compass bearings just in case, but I was confident we were heading in the right direction. As no foot track appeared and the terrain became steep and slippery, I started to question myself. We checked GPS and map regularly to try and track our progress, but we were making none. The terrain was becoming steeper and more treacherous, and we couldn’t truly follow our compass bearings, which were pointing in a South-westerly direction. This is about when I slipped and ended up hanging upside down from a tree by one knee! Poor Charlie had to struggle to push me back up the right way again. I am sure the others had their fair share of slips, but it was after this one that we decided to stop, eat some chocolate and talk about our next move.

GPS and compass were telling us we were very close to meeting up with the vehicle track, and we just needed to keep pushing down and a little bit south to meet it. However, this had been the indication for the last hour or so, and we’d not struck it yet. We tried for a wee bit longer, with expert Ed scrambling down ahead of the group to look for signs of a path and me skidaddling south to try and see if the terrain improved (it didn’t). By this time I was starting to feel a bit despondent, and not up to the task of leading the group. The general consensus was that we wanted to keep pushing down, but I felt that the terrain was just getting too dangerous. So I told everyone we had to climb back up. I expected some resistance from the group but by this time everyone was so weary they didn’t seem to care which way we went!

Low and behold, after about 20 minutes of scrambling back up the ridge, I found myself standing on reasonably flat terrain with a pink ribbon at my feet. The foot track! I yelled down to others and did a little dance with relief. In the back of my mind the thought that we might have to spend the night on Tangata Maunga was hovering, but on finding the foot track I knew we were saved from that fate.

We carried on down the foot track for about 15 minutes before it widened into the vehicle track. We took a left-hand turn at the second junction of the vehicle track to check out an unmarked hut named Waitohu Lodge. This is a private hut but the log book reveals you can stay here if you respect Larry’s things and clean up after you leave. It was an opportunity to get some photos and fill water bottles (although everyone in my group carried sufficient water for the day, except for me!)

From Waitohu Lodge, it is an ambling two hours down the vehicle track back to the Quarry. There are a few marked and unmarked junctions along this track but to get back to the quarry, you just need to stay on the main track (which remains very obvious the whole time). In the last half hour the track brushes up against the fence line of private land, where some trees have been felled. Here we were treated to a view of the sparkling lights of Otaki and its River at dusk.

Due to the 1 ½ hours we had spent scrambling on the side of Tangata Maunga, we did not get out of the bush until 7.30pm. Lucky my group was well-prepared – many had bought their head torches just in case!

As is custom with tramping, the pains and frustrations of the trip were quickly forgotten and satisfaction at completing the loop settled in. Despite the 11 ½ hour day, everyone stayed in good spirits and put up with their leader’s foibles. Safe to say lots of lessons were learnt by the leader, about both navigation and good decision-making. I felt very grateful for the good characters in my group, their general preparedness, and the good luck I had been served in finding the lost foot track!

2 thoughts on “Mick-ey Mouse Business in the Tararuas”