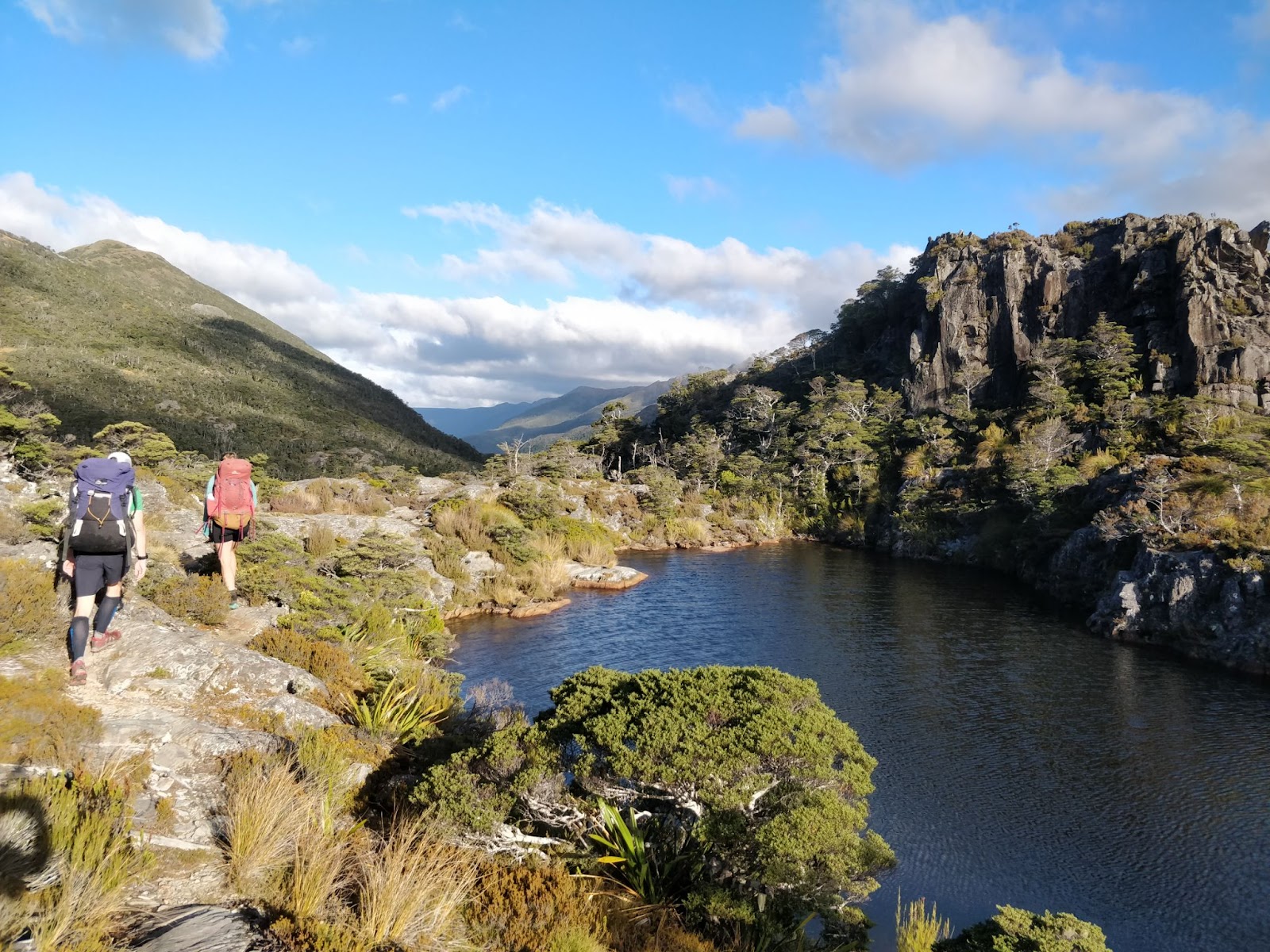 As is tradition when heading to the South Island, our trip began with a delayed ferry. Unfortunately this meant that our original plan of completing the Dragon’s Teeth crossing was rendered infeasible, so we took the time before our rescheduled crossing to brainstorm an alternative. Wanting to stay within the Kahurangi National Park, we formed a plan to traverse both the Peel and Lockett ranges – essentially doing everything we could to avoid the Cobb Valley while spending as much time near it as possible.

Arriving at the Cobb Reservoir well after sunset, we opted to park at the Sylvester Hut car park and walk along the road to Myttons Hut. It was a cool clear night, so we could walk by the moonlight without needing torches. It was really quite pleasant, but when a 4WD drove up behind us within 20 minutes there was little hesitation in sticking out our thumbs and hitching a ride the remaining length of the reservoir, leaving us with just a 15 minute trot up to Myttons Hut, an early night, and lacking any excuse not to set an early alarm for the morning.

We had opted to begin with the Peel Range as it was less of a known quantity than the Lockett Range, and we didn’t know how far we would be able to get in one day. To give ourselves the best chance we began walking just before sunrise, and made good time up the Lake Peel Track to the ridge in just under an hour, where we were met with a stunning view over a sea of cloud sitting on the tablelands. Here we diverged from the track, and headed along the ridge above Lake Peel. The first section of ridge was fairly tame – mostly tussock, plus a bit of scree coming down from Mt Peel. From pt 1544 we dropped a little to the eastern side, and rejoined the ridge at the saddle before pt 1617. After four hours, we stopped for lunch just north of pt 1617, overlooking some very steep looking terrain. Fortunately there was a somewhat well worn route along the ridge in this section, and there were no issues in following this all the way to pt 1525. By this point we were running very low on water, so it was a relief to find the tarn marked on the topo map to be full. We then made the mistake of deciding to sidle around Mt Ranolf. Steep terrain kept forcing us to climb, so we only saved ourselves 100m of elevation in the end, following a route that probably took longer than it would have to just go over the summit. Having learned that lesson we summited Mt Prospect, where we got a good view over Camp Lake, and spotted a number of tarns on a shelf above the lake where we could camp. We dropped down, set up camp, found some running water, cooked dinner, and headed to bed just as the wind picked up. Stephen and I spent a loud night in the tent, while Tereza braved it out in her bivvy bag.

Saturday morning began with the cloud lifted for sunrise. Lifted, but stayed around, and refused to leave properly for most of the morning. We climbed back up to the ridge and traversed along to Mt Cobb, enjoying steep drops down to Lake Henderson and views across to Round Lake when the cloud would allow. From Mt Cobb onwards there was a well walked route. In a little under four hours we made it to a tarn between pt 1652 and pt 1574, a perfect spot for lunch before continuing on to Mt Gibbs. After a brief diversion to Xenicus Peak we followed a cairned route down the valley between Mt Gibbs and Xenicus. This transitioned into a track through a beautiful forest of stunted beech and dracophyllum, and eventually arcs around across large rock slabs to Fenella Hut. On the way we passed an absolutely stunning camping spot by the tarn just above Fenella, but reluctantly left it behind with the intention of camping on the Lockett Range to give ourselves a head start tomorrow. After a brief rest at Fenella we continued up the Waingaro Peak Track to the ridge, then headed south for a little under a kilometer to camp by a tarn. The track along this section follows a cute wee valley which feels like it has been pulled right out of a fairy tale.

Happy with our progress, Sunday began a bit leisurely, but we still set off shortly after sunrise. This time the mist did not clear all morning. Fortunately the route along the Lockett Range is walked fairly often and there is a well formed route the whole way. The roughest part is the section around pt 1503, which is immediately followed by a fairly soul-crushing climb up a 200m screen towards Mt Benson. We stopped for almost an hour at pt 1632 for lunch overlooking Lake Lillie, then continued over Iron Hill and followed a well cairned route down to Iron Lake for an invigorating swim. The last few kilometers walking past Lake Sylvester and Little Sylvester Lake is very pleasant. So pleasant that we resolved to head back up for sunset. But not so pleasant that we actually did that once we had reached Sylvester Hut, sat down, and realised we were actually a little tired. It probably didn’t help that as dusk arrived it got surprisingly cold outside, and our fellow hut companion, Elizabeth, had warmed the hut nicely with the fire.

Monday morning was an early start – up at 5:30 for a 6am start. All this so that we could walk for just an hour to the car, then drive five hours to Picton to reach our ferry on time. At least this one wasn’t delayed.

1 thought on “Peel and Lockett Traverse”