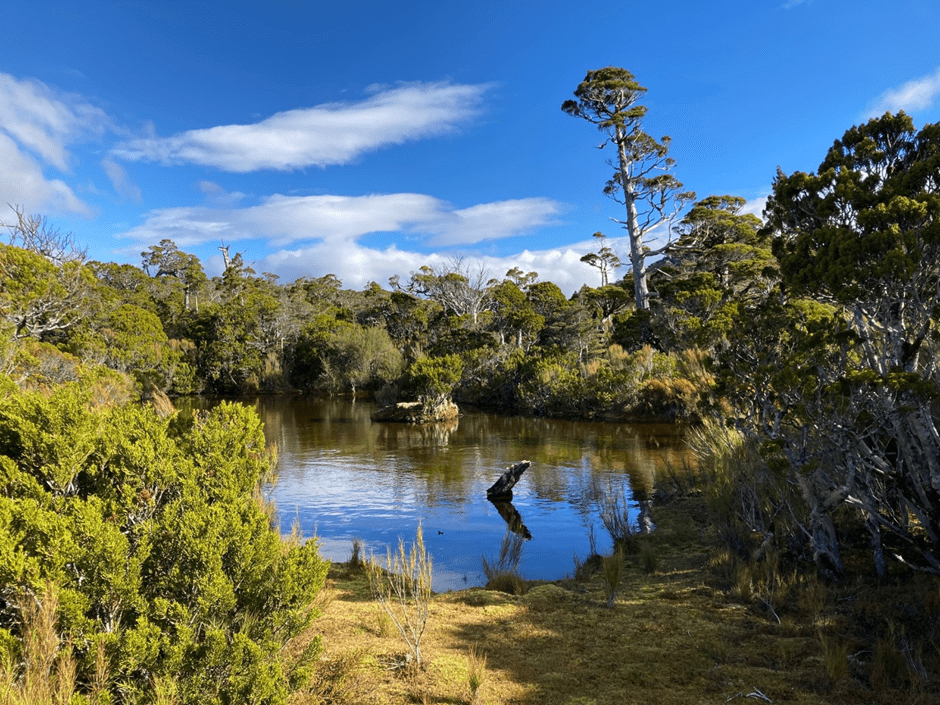 The original plan of visiting Tableland Circuit in Kahurangi National Park didn’t eventuate because of a challenging road up to Flora Car park that was made worse by a heavy rain fall on the Thursday. But the team worked together to identify exciting alternatives that would leave the group with long positive memories of their time in the Tasman region. We ended up deciding to visit Dun Mountain, over the Dun Saddle and down into the valley where Rocks Hut resides.

Cindy, John, and Matt met Simon at the Maitai Valley Dam carpark and began their intrepid walk. We started the journey up the valley on the Coppermine trail. Our first deviation was to visit the world famous Maitai Caves, a 45-minute walk off the track. We walked along taking in the birdsong and the lovely stream that runs parallel to the track. We were all eagerly thinking about what the caves might offer and how it may just change our lives. We arrived at the “opening” and, to be honest, it was somewhat underwhelming. The cave seemed more like a big pothole. Admittedly when we looked in, the cavern expands and we could see some water, but the thrill just wasn’t there. We realised that we now had another 45mins to get back to the track. So, 90 minutes lost to a hole in the ground.

We then got back onto the main track and slowly worked our way up while meeting multitudes of cyclists coming down (some happy, some tired, some bloody). Both groups were respectful of each other. There was a large variety of ages and competence, but the track looks great and needs to be explored on bike.

We veered off the shared track to a short walk that took us up to the saddle. The weather had been great so far: light clouds, no wind. Once we hit the Dun saddle this changed somewhat. Just extremely windy and difficult to even get another layer on, but the views over to Marlborough (Pelorus, Mt Richmond, Mt Fell) and the Tasman Bay were pretty cool.

Rocks Hut is about an hour from the saddle. You duck down into a native forest and slowly get through a well-formed track. You then come to a fork, where John and Simon became concerned about which way to go, a metaphor for life. John got out the map. Fifteen steps later we were at the hut.

Rocks Hut is a highlight, nice and airy, large space, stunning views of Mt Richmond, Mt Fell etc, and finally a nice sit-down toilet. The hut wasn’t full, there were about 10 people there and we all connected well. One couple had started the fire (a great fire it was too) and general chat about life the universe and everything occurred. The only friction was a discussion surrounding preferred chocolate and couscous (not together).

We had a good night’s sleep and awoke to a clear sky, a great sunrise and then the start of a new day. Not far from Rocks Hut is a lookout with some….rocks. This is about ten minutes from the hut, so we took in the views and then got back to the hut to start the journey back down to the dam.

We revisited the track back to Dun Saddle (not so windy this time) and then went steep up on to a plateau where the Dun Shelter sits. We took a break here to replenish and found inside the shelter possibly the most unhealthy-looking pillow ever.

From the shelter is a slight ascent and descent that then takes you up a native bush area. This bit was relatively steep, but once we got to that point it was all downhill. The next stop being the Dew Lakes. To get there we passed through beech forests where the sun would poke through. The descent is quite trying, but the birdsong certainly helps to distract you.

When we got to the Dew Lakes, we saw nice shallow tarns with some very soft moss on the surroundings. It’s quite a nice little spot, but if you’re there for any length of time you’ll get bitten. So, we hurried back on to the track to descend towards the Rush Pools. These aren’t pools anymore, they are man-made and were used by Māori when quarrying Argillite to make tools.

Onwards from Rush Pools to where the dam is situated, one of the team was able to provide information about the wilding conifer problem in the region. We were tired so the focus was mostly on just getting to the van. We arrive at about 5:30pm on Sunday night. As soon as we stopped and unloaded our backpacks we were met by sandflies. On mass they came and started to have their early dinner. We jumped in the van, shut the doors and drove off.

Simon was dropped off and disappeared with his family, while the rest of the team set up tents in Maitai Valley Motor Camp and headed into Nelson for pizza.