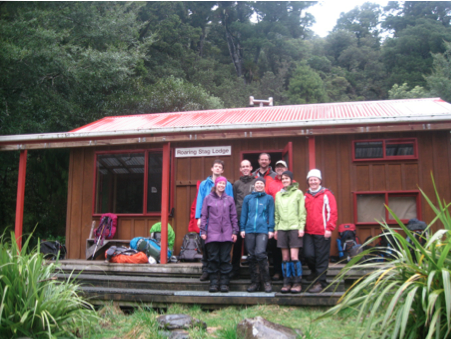 The eight of us met at 8am Saturday, many clasping coffees to assist with the early start. I’ve done plenty of tramping, but this was my second trip with the club, so I was looking forward to meeting other “easy” going trampers. As I’d hoped, the conversation flowed readily with everyone.

Lots of rain was forecast and I mentally prepared myself for this to be a weekend to test my wet weather gear. Bart drove us over the Remutaka Hill to the Putara Road end in good time. The other club van was already there, with two other groups making their start the night before.

Our destination, Roaring Stag Hut, has 12 beds. There were eight of us, but with the rubbish forecast, we were told the medium-fit group were possibly going to modify their plans and end up at Roaring Stag on Saturday night as well. This would mean that a few of us might be on the floor, but I mentally prepared myself for this too.

Just as we were setting off, a couple of cars arrived, bringing a group of Massey Uni tramping club students. There were at least seven of them. How many people were intending on staying in this 12-bed hut? By this point I’d completely lost count. It was still early in the day, and with the hut being easily accessible, I imagined that even more may be joining us. Now I was picturing myself sleeping on the floor, underneath the table, sandwiched between others who had been strategically placed there by a tetris master. Still, I thought this a better idea than spending my life cocooned in my own bed.

The walk itself was really pleasant. There’d been a lot of rain, but we didn’t have the squally showers I’d been expecting. Within the first five minutes, we crossed a swing bridge over the Mangatainoka River. There was a second, much longer swing bridge a bit further along.

The crossing of the second bridge meant that the next wee section was going to be up hill, but one step after another took us all to the top. We stopped there for lunch but didn’t linger, as we all experienced a drop in body temperature. The vegetation opened out and I imagine that there would be nice views of the hills, but we didn’t know because the cloud was huddling us in.

After a descent, the track flattened out and we had a couple of streams to cross (nobody slipped *cough*), and finally came to the hut. We came to an arrangement with the Massey party that they would take the top bunks and we would take the bottom. Brad was keen to sleep in his light-weight tent and Nick took one for the team and slept on the floor. This meant that I could claim a bed! I felt like a princess as I flung my sleeping bag over the length of the mattress. The other WTMC group never arrived and we all fitted in comfortably. The floor sandwiches will have to wait for another time!

We’d arrived with daylight to spare, so this gave us time to sit on the outside bench and drink in the river, the bush and the mist rising up the hills. We saw very few birds over the trip, and in fact saw more in the first five minutes driving back over the farmland. Instead we used our imagination to consider what fauna we’d like to see roaming in the bush.

We prepared a hearty meal, which made the students’ eyes widen with jealousy. Fortunately for them, we had an excessive quinoa situation and our potential waste went to grateful mouths. After dinner a few rounds of cards were played before bed.

There were torrential downpours overnight and again, I pictured myself sodden for the trip back. However, the skies lifted and we never experienced anything more than a light sprinkle. We retraced our steps from the day before, only this time wading through gallons of sloshy mud! The waterproof gear got a bit of a testing anyway!

We all made it back to the van in good time and everyone still appeared in good spirits, although less lively after the exercise. Thank you so much Rosanne for leading such an enjoyable trip! It was well organised and everyone seemed to have a great time. I certainly did!