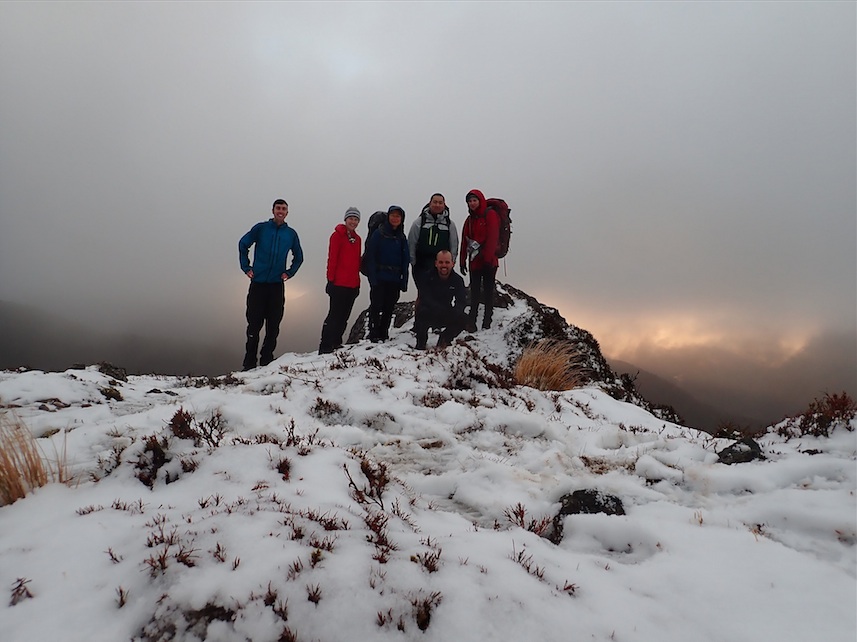 Despite the miserable forecast for Saturday, I was looking forward to Uta’s Medium ‘Holdsworth to Waiohine’ trip in the Tararuas. Not only is Uta a most excellent leader, but the company promised to be top-notch. In particular, I was looking forward to being reunited with my snowcraft buddy Juan who (when I wasn’t clinging to the snow for dear life) had me in stitches with his one-liners. He didn’t disappoint – on the way up in the van he retold the story of how he managed to brush his teeth with deep heat, and has since considered making a regular habit of it, because it tastes better than toothpaste.

After a soggy night at Holdsworth, we followed our fearless leader Uta into the bush at the sharpish time of 8.10am. We were soon nice and warm huffing up the Gentle Annie track. We stopped for a very quick snack at the Powell/Totara Flats junction, then splashed our way down the Totara Flats track which had, by this stage, turned into a stream. On we marched, up the up bits, down the down bits, and across the bridge bits, arriving at Totara Flats at 12pm exactly.

At our lunch stop, Ken brought out a little friend named Dorimon, who had been carried on Ken’s back in his own special dry bag. Dorimon posed for a picture with the Totara Flats Hut sign and then went back into the dry bag. I was a rather jealous of Dorimon – being carried comfy and dry all the way to bag the next hut!

It was a slog up to the Neil Forks junction. The track was particularly steep at the beginning, with lots of pulling oneself up on bits of greenery required. At one point, perhaps 45 minutes in, the track appeared to veer off to the right, when in fact the markers were hidden up and towards the left. Together we managed to figure it out and eventually arrived at the much-anticipated junction at about 3.30pm. Here we had to make a decision. We would lose light in another two hours and we probably had around five hours of walking to do to reach Cone Hut, our destination for the night. We considered going down to Neil Forks, or even back to Totara Flats, but in the end the group was keen to keep going. After another two hours, at 5.30pm, we popped our heads out above the bushline on Cone Hill. A smattering of snow and a smudgey sunset made for a very pretty scene. We stopped for a quick photo before the wind and snow forced us on.

Spirits were flagging at this point, as the sign down to Cone Hut indicated we had another 3 hours to go. Lucky for us, new member Andy had bought all sorts of goodies to helpwith the march down, including a bicycle light for someone who had misplaced his head torch, and extra water for the sponge who had drunk all of her own. It was here that Uta also showed her metal – she went first picking the way down a steep track in the dark and covered with more than the normal amount of tree fall. When we got to Cone Saddle I declared it was the last leg, and I was on my last legs, earning a concerned look from Uta. I felt really wobbly and incoherent by this stage. Lucky Ken still had his brain with him and kept an eye on the markers, getting us to Cone Hut by 8.30pm.

I managed to get changed and perch like a dazed bird in the corner, while my companions did all the group chores, like making dinner and getting the fire going. Andy declared that nothing would every taste as good as our peanut satay noodles did that night – and he was right. By the time we laid mattresses down and snuggled into our sleeping bags it was past 10pm. I can’t remember when I’ve had such a late night in a hut!

The sun appeared early and bright the next morning. While getting ready, Andy commented on how wonderful the loo was. I thought he was mocking me, as I had searched high and low the night before, down all sorts of funny wee tracks, looking for the loo, and had been unable to find it. I had also been very vocal about my despair at not finding the loo. But of course it appeared with the daylight. Everyone had found it but me!

We had a lazy start, enjoying a nice ramble on the most direct route to the Waiohine road end. We passed some of our WTMC friends, who were doing a reconnaissance day trip down to Tutuwai. Once out of the bush, we made a beeline for the French Bakery in Greytown where pastries and coffee were eagerly consumed.

I was most impressed with my companions on this trip. For Sarah and Andy, this was their first and second trips with the club respectively, and they breezed through the 12 hours of walking. Juan and Ken remained witty and hilarious the whole time. But special praise must be reserved for Uta. Juan put it best when he said, “Very special thanks to Uta, for her adventurous nature and great superhero leadership skills. It takes a lot of courage (and a red rain jacket) to lead a tramp like this and remain so calmed and focused. Very impressive.”