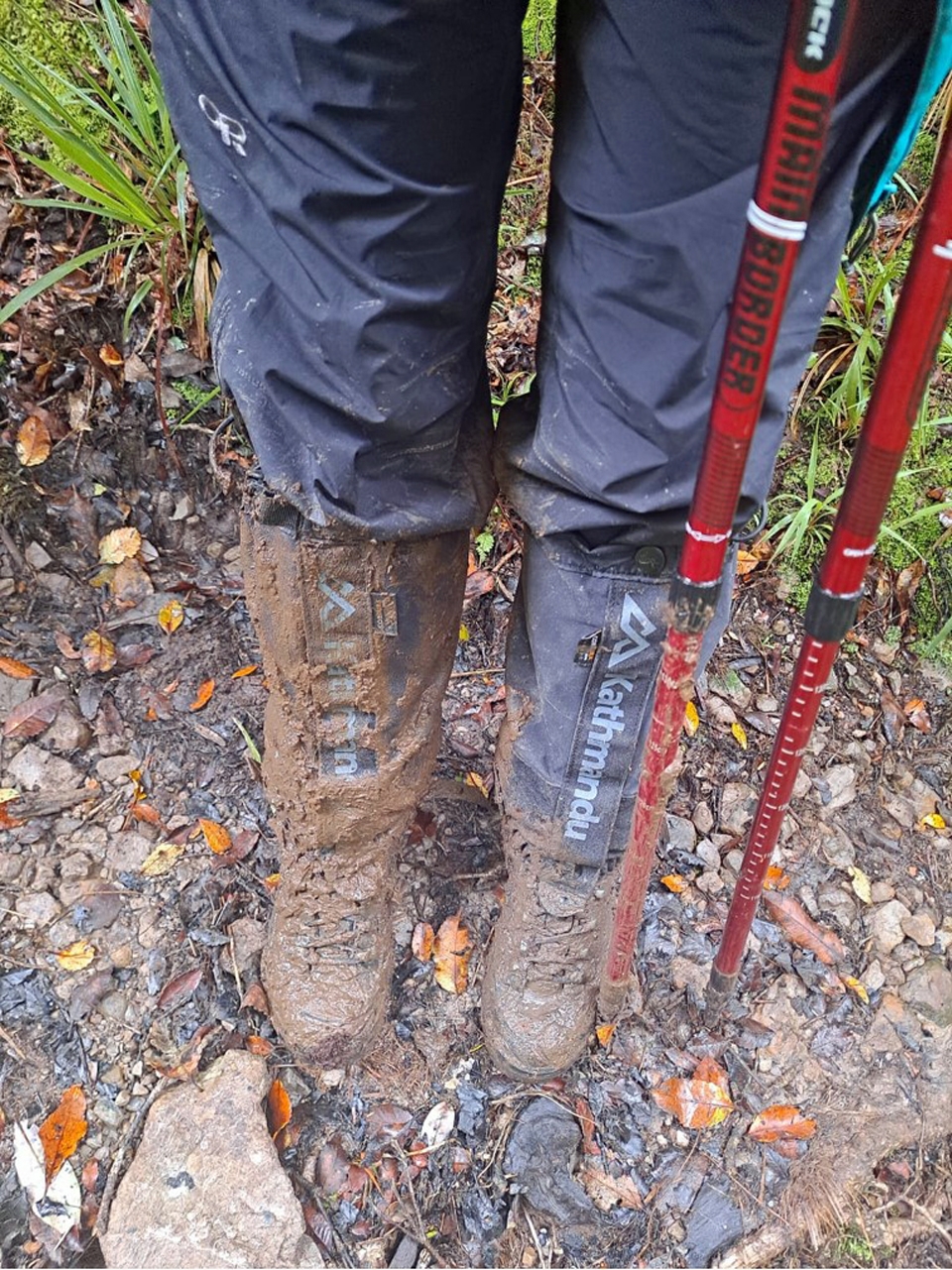 On the Saturday morning at 7.30 am six still half-asleep but excited punters met at the train station and set off in the van making our way slowly to the Poads Road end to start our walk. The beauty about leaving at an early time on a Saturday morning is that there is no traffic whatsoever and we cruised through all the way to Levin with hardly any cars on the road. We arrived about 9 am and by the time we got ourselves ready we set off it was 9.30 am.

The first five minutes of the walk you have to walk through farmland and we were greeted with quite a few calves that were ready for their morning feed and thought maybe six trampers were going to give this to them. They were hot on our heels with a couple of nudges on the arm and in the back. Once we were all over the fence and away from the hungry calves we were able to continue our walk across farmland before heading into the lush forest.

Once we entered the forest we then detoured right and started our climb on the Te Araroa Trail which then lead onto the Waiopehu Track. To begin with the trail was a gradual climb before it became a little more steep. The day was a warm one with the sun shining and humidity in the air which made the climb up a bit of an uncomfortable one. Once the forest was no more and we were exposed to the sunlight we were finding that there was a lot more mud that we had to hop over and avoid. The walk to the hut overall took us 4½ hours and we had a late lunch on the deck enjoying the lovely view and the warm sun.

After our lunch stop we continued our climb to the Twin Peak Memorial where we regrouped and had a quick stop before continuing on to Richards Knob. I was quite amazed at how much mud there was even though the trail from Waiopehu hut to Richards Knob was quite exposed and it was sunny and hot. After a quick break we then descent down Dora Ridge to Te Matawai Hut around 6.30 pm which took us roughly around 2½ hours from Richards Knob as predicted on the DOC sign.

I was quite surprised that we were the only ones at the hut as this hut forms part of the Te Araroa Trail, and being summer we thought it would have been full. Half of the group decided that since they had carried their tents they were going to use them and set up camp for the night while the other half decided to stay in the hut for the night. After about half an hour two fellas who were from Wellington also came in to spend the night at the hut. We cooked up a delicious dinner of tofu satay noodles and it seems we cooked way too much noodles which we had to carry out the next day ☹ I need to work on my ratio of noodles to veggies in the future.

After an good nights sleep we got up around 7ish with the intention to head off at 8 am, however, the water took awhile to boil and some of us were waiting for a cuppa and breakfast to set off. With some of the group ready to go, they set off at 8 am with the rest of the group not far behind. Half an hour later we were ready to and set off to meet the others at our meeting point which was Richards Knob. There was wind and rain predicated for the afternoon and we wanted to get to the van before this happened. The start of the walk was overcast which meant for a much cooler climb up over Dora Ridge.

We meet up with the rest of the group along Dora Ridge and walked together to Richards Knob. We then took a new path down Gable End which was quite exposed to begin with and then we were back in the bush under cover. For some reason I thought on the walk down we would not encounter any mud, boy was I wrong! We were slipping and sliding all over the place and a few of us who tried to avoid the mud nearly ended up losing our shoes! Just before we hit the Ohau River it started to rain which made the track down even more slippery. Once down the river we had a quick break and walked along the river before heading onto the farmland again (no calves to be seen) and  back to the van. On a quick inspection when we got back to the van I noticed that everyone but Nick had mud all over their gaiters and shoes and I was quite impressed at his ability to have clean shoes unlike the rest of us. Overall it took us around 6 hours from Te Matawai hut back to the van. After a quick change we then got into the van and headed back to Wellington.