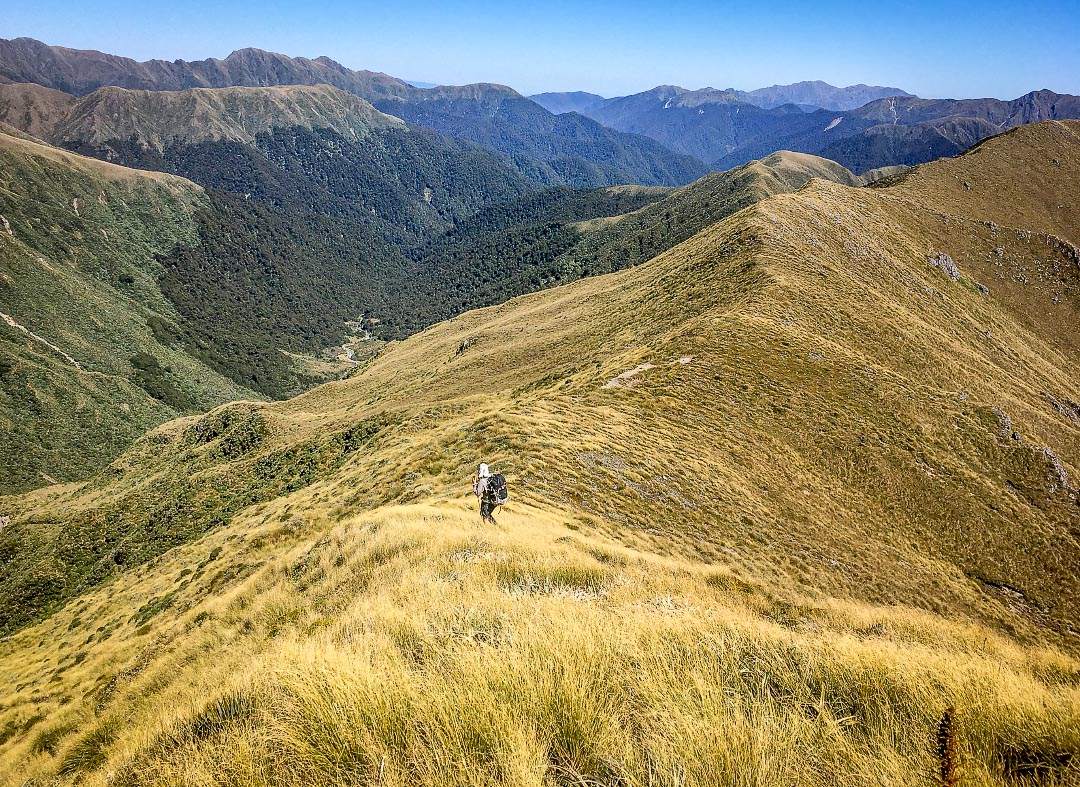 I have been determinedly Tararua hut-bagging for a couple of years now, having realised I’d haphazardly visited about three quarters of them. Carkeek Hut is one of the most difficult to get to being right in the middle of the range with no DoC-maintained tracks to it. I was waiting for a good weather weekend as I wanted to enjoy, rather than endure, the time on the tops. I also didn’t want to go solo for two long off-track days so it’s taken a while for the combination of weather, time and buddies to align—but that’s ok because the hills aren’t going anywhere fast!

There are many ways to get in and out of Carkeek—we settled on a start/finish at The Pines and made a few alterations to our route as we wanted to minimise retracing our steps during the weekend. Illona and I took a leisurely approach to the start of the weekend leaving Wellington at lunchtime Friday and sauntering in to Mitre Flats Hut along the Barra Track arriving just in time for a dip in the river before it lost the sun. It took us 2 hrs and 37 mins. We made dinner at the hut and had an early night—but not before chatting to the steady stream of arrivals to find out who was heading where. Turned out most people were planning to head up to Mitre in the morning, with destinations varying from Tarn Ridge, Dorset Ridge, Arete, Te Matawai and Carkeek. Great to see so many people out making the most of the good forecast including more than one set of parent-child duos doing some pretty impressive trips and various people with connections to WTMC.

We had a long day on Saturday so chose to get going early—as did everyone else in the hut. Up at six and walking by seven had us sitting atop Mitre before 10 am with the biggest climb (just short of 1200 m) of the day behind us. There were no clouds in the sky. Yes you read that correctly…we were stood on the highest point in the range and there were no clouds!

We carried on over Brockett and Girdlestone to Tarn Ridge Hut arriving there at 11:30 am. This was our only opportunity for a water refill all day so we were relieved to find a full tank and gulped down as much as we could along with a first lunch. Note that the sign at Mitre Flats Hut indicates 4 hrs to Tarn Ridge hut. It took us 4½ hrs in perfect conditions—probably best to allow 5-6 hrs unless you are a mountain goat without a pack.

Leaving Tarn Ridge hut at 12 pm we could see our destination across the Waiohine valley and we could also see the full extent of the U-shaped valley route with lots of ups and downs along the way that we had ahead of us. With such clear visibility navigation wasn’t a problem as we tramped north along Tarn Ridge, paid attention to our footwork through the Waiohine Pinnacles and arrived at the signed junction to the track down to Arete Forks. From here we curled west and then south over Lancaster, Thompson and Carkeek gaining views down into the Park Valley which starts very open but turns steep sided very quickly. That’s a trip for another time! All along we could see Taranaki floating way out to the west—we’d climbed it just the weekend before thanks to this run of great weather.

As we moved down the ridge we took notice of the various spurs descending into the Waiohine as we were planning to drop down and up to Dorset Ridge on our return route. Always good to take the opportunity to sight a route from different angles—it all comes in handy with route finding when you’re there on the ground. From some points on the ridge we could see Carkeek Hut just below the bush line and it didn’t take us long to get there…or at least that’s what the hunters who had spotted us through their binoculars on our way down told us when we arrived. It was 5 pm, so 5 hrs from Tarn Ridge Hut and a 10 hr day altogether.

I was half expecting to be tenting at Carkeek given the fine weather and it’s popularity as a fly-in fly-out hunting spot so it wasn’t a surprise to see a fresh deer skull and antlers as we arrived. Turns out the two hunters were all packed up awaiting their helo out so we benefitted from a freshly boiled kettle and a fresh tomato they didn’t need to take home but otherwise had the hut to ourselves complete with newly installed wifi (haha). The other group from Mitre Flats Hut who were planning to get to Carkeek never made it (we hadn’t seen any sign of them on the ridge and heard from others on the way out that they had stopped at Tarn Ridge as they were travelling slower than expected).

As well as the excitement of watching a helicopter pick-up (the two hunters would be home in 12 mins and it would take us 12 hrs to walk out— I’ll leave it up to the reader to assess who has most fun! We also had the delight of a homemade dehy meal thanks to Christmas trip leftovers. This meant plenty of time for watching the sunset, reading the hut library collection and still getting into our sleeping bags at a reasonable trampers’ bedtime.

Next morning we were on our way by 6:30 am so we got an hour of beautiful morning light as we retraced our steps up the ridge to Point 1285 from which we followed the shallow spur to the bush line. Having sourced a map with old tracks marked and from reading the hut book we weren’t surprised to find a clearly permolat-marked entry point into the bush at about the 1140 m mark. We were surprised, however, at how clearly marked the track down to the river was from here—it was very quick travel with fresh permolat on what seemed like every other tree (at least in the downhill direction) so we were down at the river forks by 8:15 am. Time to stock up on water before the climb out. From the forks we could also see fresh permolat marking the spur that would take you up to the southern end of the flat bit of Tarn Ridge in a north easterly direction. From our experience of the ‘track’ down from Carkeek Ridge you might assume that this was also well marked easy travel and this would align with what we’d understood from some of the inhabitants of Mitre Flats Hut on Friday evening. But we wanted to pick up an unmaintained old track up to Dorset Ridge for which we found no such fresh permolat. However using the compass and gps we did correctly identify the right place to start climbing (a bit of a gut) and within 20 m or so had spotted some much older permolat which we then picked up again on and off as we made our way up to Dorset Ridge by the path of least resistance.

I have known of the existence of permolat markers for ages, and followed a great many of them in the hills but this is the first time I questioned where the name comes from. It seems to be the name for the material the ‘permolat’ markers are made from which is essentially bits of white or orange Venetian blind. But it’s also now the name for the group of volunteers who do track and hut maintenance in places that DoC no longer do. Some more related history can be found here -> http://remotehuts.co.nz/about

After topping out on Dorset Ridge we rejoined our track from the previous day for a short section to Girdlestone where we made the call to travel out via Mid King Biv rather than back over Mitre. We had time (it was only 11 am), the tops were still clear, the wind was still light, we were feeling good and knew the unmarked track down from the biv was relatively fast travel. No sooner had we started down the rocky descent off Girdlestone did the wind start to pick up—so the ups and downs over Adkin and North King to Mid-King made us even more appreciative of the previous day’s stunning conditions. The wind was probably only 40-50km/h so it was very manageable but not that enjoyable. We didn’t envy a party ahead of us that carried on south along the tops when we turned to descend at Mid King. During a short break out of the wind I used the cell coverage to look up what I could about the potential time and trickiness of exiting from Mitre Flats down the Waingawa River rather than along the Barra Track. We’d talked about how neither of us had done it before on the way in and with progress going well were thinking about it as an option on the way out but knowing we’d be at the end of a long day didn’t want to get out of our depth so to speak. The research helped us conclude it would likely take slightly longer than the track and potentially involve a few swims so we put off making a decision until we were down at the bridge.

We flew down the ‘track’ to the sole orange triangle and cairn that mark the path to the biv itself and from there were another 2 hrs down to the bridge at Mitre Flats. The foot pad was very established all the way down except in a couple of places where tree fall caused us to lose it—we probably lost 20 mins or so on a misguided detour midway down but still made it to the bridge by 4 pm.

We stopped when we hit Baldy Creek to shuffle a few bits of gear into more waterproof locations and decided that we’d use the few hundred metres of stream travel down South Mitre Stream to assess whether we were up for travelling out along the Waingawa. It was pretty warm down in the valley out of the wind, we still had plenty of daylight and energy and were both enjoying the rock hopping so it was an easy call to yet again avoid retracing our steps by following the Waingawa.

And it was a good call—the river was beautiful with big purple-red rocks that reminded me of giant kumara. The flow was low and we mostly managed with only knee deep crossings. But there were a few side scrambles and three or four places where we had to wade up to our chests. Before the end there was also one pool where we both ended up swimming (there might have been some funny facial expressions as we got deeper and deeper). It was still warm, but river travel is more energy sapping than most and concentration is required to avoid slipping in the more consequential environment. After a couple of hours I could feel myself tiring and conscious we needed to be on full alert travelling in a river I dug out the lollies to help us through the last hour. Three hours from bridge to the car in the end and a 12½ hr day overall. It was a great end to a great weekend trip with the goal of bagging Carkeek hut achieved and a Plan A+ route with lots of variety—tops, track, off-track and river travel!

The clear weather combined with the distance we covered and a set of sharp eyes meant during the weekend we saw:
– Ruapehu, Taranaki, Manakau, Tapuae-o-nueku, Holdsworth, Hector, Herepai and everything in between
– Te matawai Hut, Waiopehu Hut, Dracophyllum Hut, McGregor Biv, Dorset ridge Hut, Arete Biv, Arete Forks Hut, Jumbo Hut as well as the huts we directly visited.