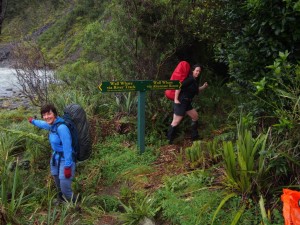 After Ngauruhoe high camp was cancelled, I decided I needed a weekend of tramping to keep my fitness for Tappy in a few weeks. For family reasons, Spencer was about to enter a period of tramping abstinence and wanted a good solid tramp. As well as keeping tramping fit, Elizabeth needed an excuse to avoid commitments involving lamb tailing. So a solid medium tramp was agreed to!

After multiple revisions of our planned tramping route and a harrowing journey we arrived at the Waiohine road end. It was showery (rain with sunshine) so we decided on Plan F because it gave three hut options along the way – flexibility if the day progressed to rain (showers without sun). We didn’t quite decide on who was the trip leader…so we used a collaborative, laissez-faire leadership model.

The Waiohine river was muddy and pumping when we crossed it at 10am Saturday and Coal stream was at high thigh level – about a foot deeper than in early winter. Was this what the DoC sign was referring to as an ‘unmanaged hazard’?

On we went, up and over Reeves (899m), watching the showers being blown towards us. By 2pm we were at Tutuwai Hut for lunch, overlooking the much swollen river. With our wet footwear back on, we waded along the track in rain for just over an hour to reach Cone Hut.

Here was a decision point – it wasn’t quite 4pm so would we:

Ambivalence dominated. We weren’t too tired after our 10am start and Elizabeth mentioned that we couldn’t stop walking because we’d only had lunch an hour ago. Perhaps it was un-mediumish to not use the last 2 hours of daylight for tramping.

So off we set, on the water-laden path to Cone Saddle. Part way up, Elizabeth mentioned that she’d left her tramping mojo at Cone Hut – we weren’t going back downhill to get it, so Spencer and I shared some of our plentiful tramping mojo with her. We all reached Cone Saddle at 5pm and then headed off on the track to the Waiohine valley. I hadn’t been on this track before and enjoyed the new terrain, not-too-well-worn nature of the track, the bush and the identifying of good campsites (close to puddles for water supply) along the way. Spencer even saw a young deer. Part way down, it was time to put on our head torches, have some snacks to replenish the collective tramping mojo and get into the serious business of night walking.

With the exception of Elizabeth who was carrying the dinner carrot and therefore had excellent night vision, we were slowed a bit in the dark by all the wet, slippery tree routes on the track. About 7pm we reached the Waiohine valley track to Totara Flats, which was about 4.5 km away. We headed towards Makaka creek, took a bit of a detour and saw that it was too swollen to cross. I shined my torch upstream and saw a shiny new bridge! Back on the track, we crossed the bridge over the stream and then stopped at a wee stream to refill our water bottles. It was about here, in the drizzle, that I sensed the collective tramping mojo had hit a low point, so we shared some chocolate, imagined the warm hut waiting for us at Totara Flats, and set off.

Spencer and I had travelled this route many times before. However, we had both completely forgotten about the section of track that follows the river edge for about 10 minutes at the bottom of a slip! When we got to this point, the Waiohine River was far too swollen to take this low route. We had to go up and over the slip. The lure of the hut and varying degrees of reluctance to camp in the rain propelled us upwards.

The over-slip detour was a bit rugged, vertical and rambly, the orange triangles were a bit sparse, and the tramping mojo was getting dangerously low. Grovelling up in the darkness through the bush, there were some spots where we were suddenly engulfed by a vast misty greyness – this was where the detour passed close to the edge of the slip and we traversed these sections one by one. Taking turns to lead, we lost the track a few times – Spencer found a very pretty grove at one point – he was so fond of it I contemplated camping there but Elizabeth suggested that camping in the rain at the top of an active slip was a dumb idea. So dragging Spencer away from his arboreal paradise, down we went on the side of the slip. Whilst I changed my torch batteries and did a time check at 9pm, Elizabeth and Spencer fantasized about what life would be like if we’d stopped at Cone Hut at 4pm – a mellow evening, a full puku after a tasty dinner, cosily cocooned in our sleeping bags we’d be asleep by now!

With my new-found night visibility, I led the final descent back to the main track. At 9:30pm Spencer declared it was time for dinner and pulled out the Tim Tams. We gobbled them for instant chocolate transfusion, whilst looking skyward and pondering the coexistence of clouds and stars. We were on the home stretch now – not even my recollection of a coming ‘horrible, toi toi infested creek crossing’ could slow me. But, as far as Elizabeth and Spencer were concerned, the dregs of collective tramping mojo had been left somewhere up near the slip and fatigue and grumbles had set in! To combat this I lead with a steady pace through the trees and across the flats, close enough in front to keep Elizabeth and Spencer moving but far enough away to not clearly hear the mutinous grumbles about sore feet, don’t think I can take another step, etc.

Finally, at 10:30pm, we arrived at the hut, shattered. Even though the hut was far from full, to get some space for our mattresses, it was necessary to wake people who had liberally spread their stuff over the sleeping platforms. After this was dealt with, we rehydrated, changed, put our watches forward an hour and went to bed at midnight!

On Sunday we slept in and woke when we felt like it, which turned out to be about 9amish. We’d each had varying success at sleeping and I wasn’t feeling that all my tramping mojo had returned. Still weary, we ambled around the hut and decided to have our pasta dinner for brunch. We cooked it with seamless ease, vaguely aware of a chaotic group going about their morning madness.

We were happily chomping our way through our tuna pesto pasta brunch with freshly brewed coffee when a femme fatale appeared with Spencer’s wet grey socks (with one orange stripe to match his Crocs). The ensuing dialogue went something like this:

FF: I’m looking for my socks. Are these your socks?
S: Yes. What colour are your socks?
FF: Black and waterproof.
S: My socks, which you are holding, are grey and not waterproof.
FF: Oh yes. Would you like me to put them in the fire for you?
S: No, not really. Please put them over there near the fire.

The femme fatale and her chaotic group continued in that vein with their preparations –tying pillows around their butts (for floating down the river? for posterior cushioning if they tripped over?), going about the hut looking for gear (not necessarily their own) to fit into their packs, seemingly with little recollection of what gear they had arrived with! It was all a bit much. Elizabeth was more pro-active and started sweeping the hut – soon enough one of the other occupants got the hint and started helping her.

Anyway, the hut soon emptied out and we had it to ourselves for a peaceful half hour. We tidied it, packed up and put on our soggy clothes and boots. It was then that the real disaster struck – Elizabeth’s new luxurious blue and black Icebreaker socks had disappeared. We fumed and vowed to track down the sock thief.

At 11:45 am, just as the morning rain stopped, we set off on the main valley track back towards the Waiohine road end, hot on the trail of the suspected sock thief. The river had dropped a lot overnight so we took the river route below the slip and soon caught up with the chaotic group. Tactfully we asked them to check their packs for the lost socks when they got home, and gave our contact info in case they found the socks.

With that out of the way, beneath blue sky and with occasional showers, we sauntered on. We lamented that the arduous Saturday had depleted our beer bellies and joked about sheep, colour coordination of crocs and socks, wet dogs and other random unprintable things. By 4:15pm we were back at the bridge over the fast-flowing, green Waiohine river, and the end of our adventurous and entertaining, solid medium tramp.