We had a looong drive to Makahu Saddle carpark in the Kawekas and we arrived there at midnight. In our group there were two tents and I was put in charge of putting up the fly for three of us. Um, so surprisingly enough after all the time I have been with the club, I have never used a club fly before. Anyway, I was extremely tired and just wanted go to sleep so I figured I should just get on with it. So under my direction, Jane and Erika helped me put up the fly under the light of headlamps which hordes of bugs were gravitating towards. I couldn’t find any trees to tie the fly to and none of us had walking poles handy so I tied it to the carpark fence meaning we had a very low entrance and we had to dive under the fence to get into bed. But, hey, what’s life without challenges? 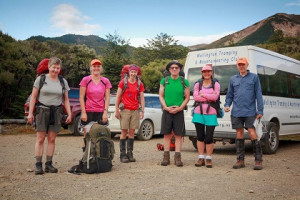 On Saturday morning the plan was to head to Ballard hut with an 8am departure. Makahu Saddle hut was 5 minutes up the track (but only had 4 bunks and there were a couple of cars in the carpark so we assumed it would be full which is why we camped). 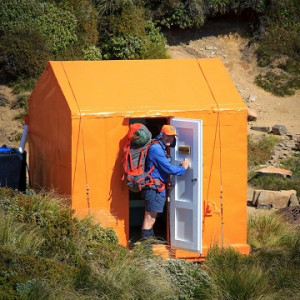 I went in and filled in the intentions book from Makahu Saddle hut, said hello to the trampers still in their sleeping bags, then went back out and bolted the door not realising that unlike any other hut I have been in, that the internal and external bolt were not linked. So, inadvertently, I had locked these poor trampers in. Unaware of this we continued on our merry way until 5 minutes later Jane thought she had left her sunglasses in the carpark. While she ran back, we heard some crashing about – we thought it was hunters very close to the track which made us a little nervous. 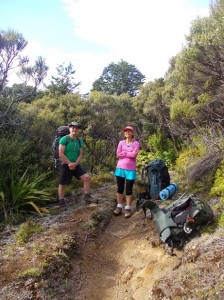 Meanwhile Jane had came across two trampers, one of whom was looking a bit dirty. They explained that they were the trampers from Makahu Saddle hut and had immediately realised they were locked in when they heard the bolt slide shut so they started banging on the hut walls and yelling out for help which was the noise we heard. They explained that they had to climb out of the chimney to get out of the hut since there was no window!! Jane profusely apologised and continued back to us. After Jane reported this story back to us, and I looked extremely sheepish and endured some good ribbing, we all had a good laugh after hearing that the trampers were ok and had taken what had happened with good humour.

We continued along on Kaweka Flats Track and bagged Kaweka Flats Biv which was a very small, cute biv. You couldn’t stand up in the doorway but had to crouch to get into it. 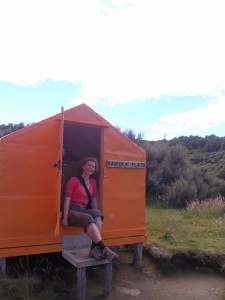 We wandered along for a while until suddenly another hut appeared. A few of us who had looked at the map were really bewildered – we had not been expecting a hut for many hours, so where were we? We had walked past a silver junction sign without noticing it and we had continued along to the historic Iron Whare for which the map showed no marked track to but in fact there was a very well marked track. 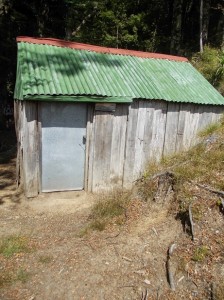 We made our way back to the junction sign of which you could only read the writing when you got right up to it because the writing was etched into the sign. On we went.

There were a few steep clay slopes with a scree covering we had to go down. Kevin, Garth & Beccy bounded down them, making it look very easy but I remained unconvinced. I quickly decided that the best way of navigating these was sitting down and sliding much to the amusement of everyone else.

We quickly realised that we weren’t making progress as quickly as we hoped and in fact the DoC time to get to Ballard hut seemed unusually unrealistic. Therefore instead of going to Ballard hut we decided to go to Middle Hill hut instead. It was a steep climb up to Camp Spur Track Junction. 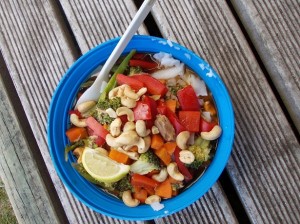 After cooking up a very nice dinner of chilli cashew rice noodles we quickly realised that there were no big eaters in the group and we had a lot of food left over. Being good, tidy trampers we were going to have to carry this cooked leftover food for the next two days since no one could finish it. I was designated the role of pack mule because it was thought it might slow me down. So unfortunately for me my bag was not getting any lighter after cooking dinner but rather heavier!! 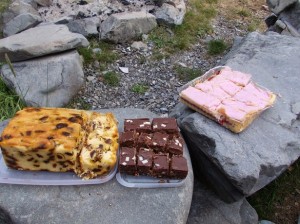 We had also discovered that we had somehow ended up with 4 cakes/slices in the group. Nearly a cake each! Garth had brought both a cake and a slice because he wasn’t sure if a slice counted as a cake as per Kevin’s food allocation in the trip plan. Apparently Garth had also made 3 visits to different supermarkets before deciding on 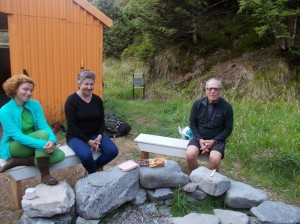 his purchases as well. I was really impressed with his dedication and Kevin apologised for any mental anguish his trip plan and food allocations had caused Garth.

Jane and I decided to sleep out on the porch since there was not enough room in the hut for everyone and it was a lovely night with a beautiful starry sky. It got pretty windy in the night but not cold. We just snuggled down in our sleeping bags to get out of the wind. It was actually the best sleep I have ever got on a tramp……

The next morning we woke up at 6am and were off by 7am to get the majority of the climbing done before it got too hot. The climb up Camp Spur to the edge of the bushline was looong and there was a cake stop at 900m. As we reached the bushline, we started getting blown around by a fierce gale. Now I was glad I had a heavy bag pinning me down but I was still getting blown sideways. I led the way up to Whetu. We wandered along the tops towards North Kaweka where we had lunch and I wandered along by myself to bag the trig. 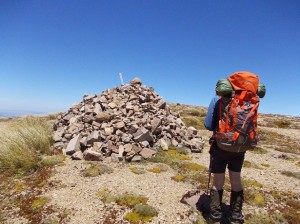 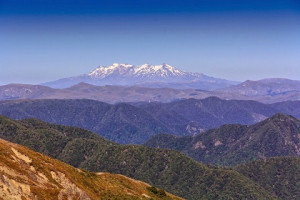 We headed off towards Kaweka Junction (commonly just referred to as Kaweka J) and were rewarded with amazing views of the rest of the Kawekas, Ruapehu andNgauruhoe.

From Kaweka J we descended down the spur to Sterns Saddle 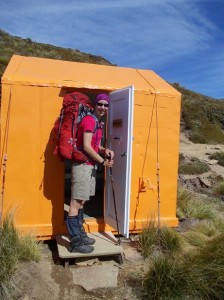 Junction. Here we turned off to go to Backridge hut and got there at 3:30pm. I quickly walked the last 100 metres to the hut to check if there were any windows to escape out and if there was a bolt on the door. We sat down and everyone was content to lie down for a while except for me. So I wandered back up along the track in the direction of Backridge Biv. I only had a hour before dinner and had promised to be back by 7pm so I just went up to Maminga and into the bushline past that. Since I was by myself I had to stay on the track, but I wanted to practice some navigation by taking bearings. So I took a bearing back to Sterns Saddle junction and followed it as if the track didn’t exist. I then took another bearing from the junction down to Backridge hut…… 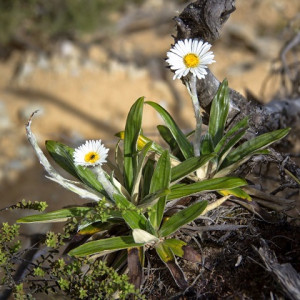 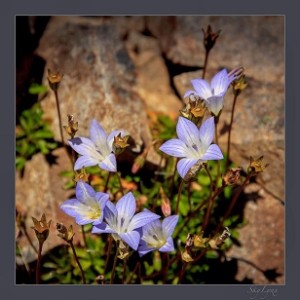 I had to be very careful that night as Kevin tried to lure me into the hut when no one else was in there so he could try and lock me in. I also had to sneak quietly off to the loo as it also had an external lock.

We had a mushroom risotto dinner that night. There were still about 3 cakes for dessert to choose from so everyone was spoilt for choice. We had some for morning tea on Monday after I vetoed cake being had for breakfast. It turned out having the extra cake was a blessing in disguise because we only found out on Monday morning that it was Jane’s Birthday that day so we managed to have a cake for her and sing happy birthday halfway up the spur.

On Monday we walked back up the track behind Backridge hut to the main ridge then walked down Makahu spur to Dominie Hut. I had to be careful here again as people were still trying to lock me in a hut. The trials I had to endure on this trip… Funnily enough on the hut door it said “please bolt the door.” See, I was just following instructions! 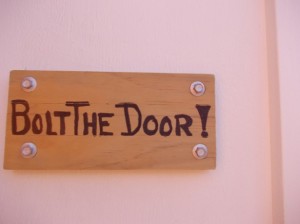 We continued down with the track turning into a steep scree slope. So, down we went and I made a bit of a meal of getting down. I kept slipping and falling over and slipping over again when I tried to stand up. Every time Kevin looked back to check on how everyone was doing he found me on the ground behind him much to his amusement. I think he was starting to wonder about how I was actually tramping because I was spending more time on the ground than on my feet. I got to the bottom relatively quickly with a few pointers from Kevin, Beccy and Garth. So I didn’t get any marks for technique or finesse but I got plenty of marks for good attitude and humour as I was laughing the whole way down. 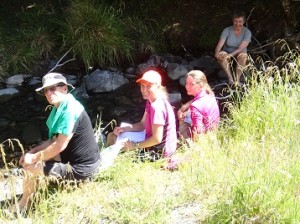 We eventually got back onto a nice gentle track to the carpark.