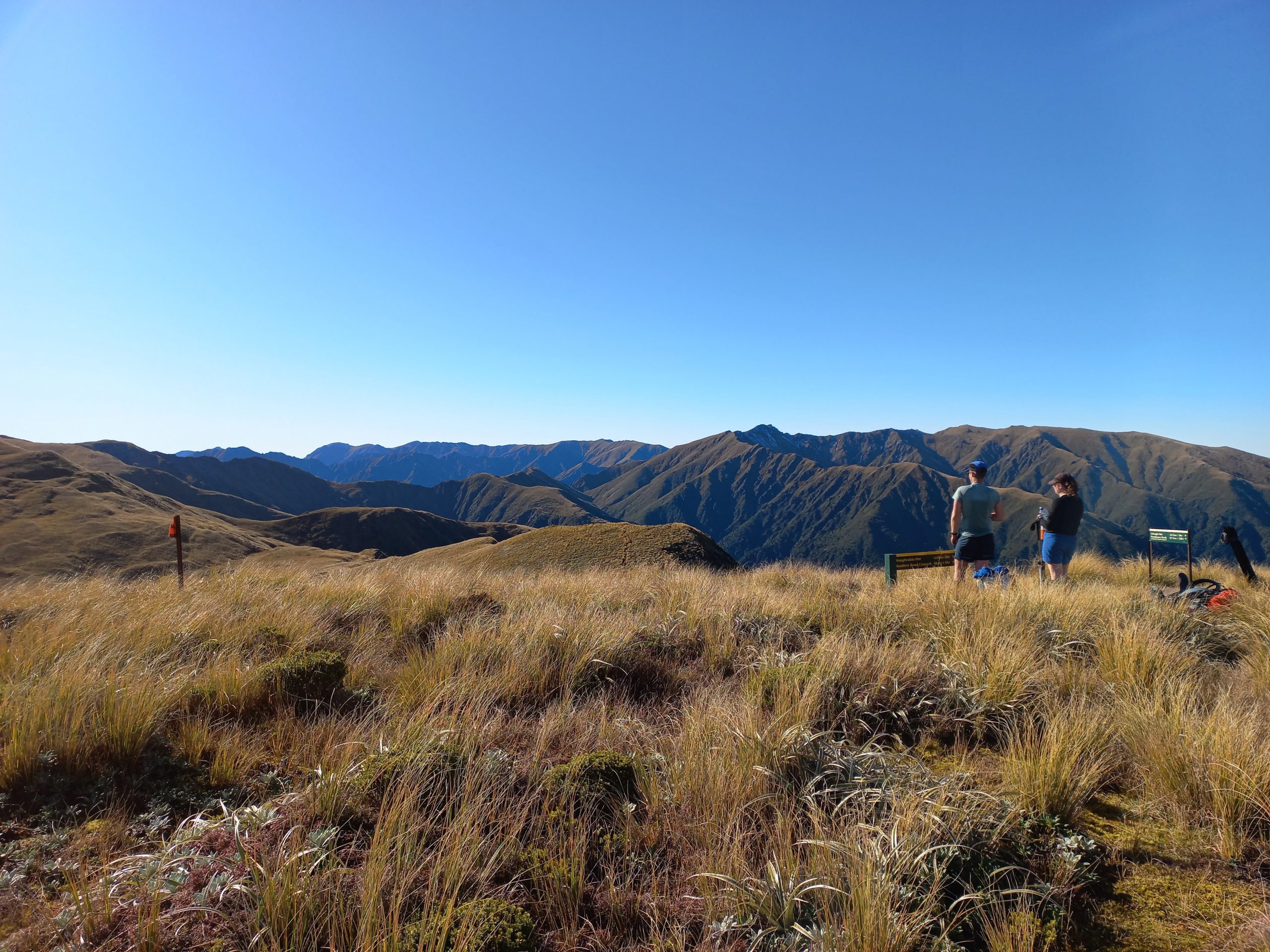 Note: A Personal Locator Beacon was activated on this trip. Read this article to learn more about the club’s response.

On Friday afternoon we set off from Wellington station, picking up Anna at Melling Station on the way before testing out the new transmission gully route to Waikanae where we picked up a tramper from the easy group. After a dinner stop at Cafe Anatolia in Levin, and rally driving along lots of windy roads in the pitch dark night towards Āpiti, we reached our destination for the night.

Meredith leading the Easy group had teed up accommodation with Mary and Steve. They had lovingly opened up their home to 9 weary trampers who were dreading camping on the frosty grounds in the Rangiwahia domain. We were entertained by their stories including their fight to keep open their nearby reserve and trapping lines. All of this was while drinking cups of tea and eating Louise slice, which Mary had so kindly baked. They were consummate hosts and we were very grateful for the accommodation. It made a real change from the usual damp campground and long wait for the hot water to boil in the morning!

The next morning we were up and raring to go. Leaving Steve and Mary’s at 7:40 and after minimal roadend faff, we started off on the track at 8:10am.

It was nippy but we soon warmed up walking up the hill to Rangiwahia hut. Ruapehu and Ngāuruhoe made an appearance and Anna got extremely excited as we even got a peak at Taranaki on the way. Making good time, we arrived 1h 40min later at 9:50. We had a decent morning tea stop with stunning views of all the mountains.

Leaving around 30mins later, we continued up the hill behind the hut towards the tops. The track was fairly obvious and well marked, so it made for easy travel. It was so hard not to keep remarking on the views and weather that we decided we would need to keep a tally.

We arrived at the turn-off to Triangle hut just before midday. We realised that we would be getting to Triangle hut pretty early at the rate we were travelling. So we decided to take advantage of the stunning views and weather to have another decent stop while we could. We walked a little further to the top of Mangahuia to have a prime spot. We lazed around for a good 50mins eating, appreciating the view and the good weather, and chatting to a day tripper who was doing the Deadman’s loop from Rangiwahia hut (this seemed to be a pretty popular option and we saw a number of groups doing this over the weekend). From here we could also scope out the steep spur we would need to descend to Triangle.

We reluctantly decided to set off for the hut and made our way down from Mangahuia back to the track junction and started off from there at around 1:15. The track down from here was easy walking. There were poles to mark the way but these were less obvious than the earlier part of the track and would’ve been trickier to see in poor visibility.

However, as we started descending the spur the tussock got thicker, so we couldn’t see our feet and this slowed us down a bit. Much amusement came from people suddenly disappearing into trenches hidden by the tussock and practising their bum sliding on the slippery ground. As we made it to the bushline the track got easier to navigate with some stunning beech forest and moss.

We made it to Triangle hut and were grateful to see that Karl (who’d passed us earlier) had got the fire going. The stream next to the hut wasn’t any higher than calf deep and after a failed attempt to keep our feet dry when crossing, we settled into the hut for the night.

All up, our day was 7.5 hours, including two generous stops of 30 minutes and 1 hour.

We cooked a meal of satay noodles. After chatting for a bit, the winter light quickly faded and we all got into bed for some rest.

It was then that we started discussing options and decided to wait until 8am to see if things improved and make a call on what to do.

The only ways out were through to Irongate hut via the river (cold, wet and slippery) or back the way we came (steep, cold and slippery). Given that Jon was so dehydrated, unsteady on his feet and fatigued, we figured it would take at least twice as long to walk, if we were able to make it at all. This would put us out after dark and after our scheduled exit time, which would have triggered a rescue anyway. With the risk of Jon slipping going up the hill we figured things could only get more dangerous and put us all in a worse situation.

The gully in which Triangle hut is located is pretty tight, with not a lot of flat space on the stream bank for a helicopter to land. We weren’t sure how it would get in or how long it would take to do so. Given this, as well as the daylight and good weather window we had (winds were scheduled to pick up later that afternoon), we decided it was better to act early.

By 8am, things had not improved at all. The decision was pretty clear, so we called it and after everyone agreeing, pulled the club PLB at 8:10am.

Anna and I quickly raced around and started to pack up all the equipment which was scattered around the hut. We also placed some bright colored items (a tarp, pack liner and pack cover) out on the bank to attract attention.

It was extremely frosty and Jon was still freezing. So, at Karl’s suggestion, we got the fire going again to warm everyone up.

A little before 9am, we began to hear noises that sounded like a helicopter. It circled a couple of times, possibly unsure of where to land. We waved to attract attention and eventually it seemed to hone in. As it descended, we grabbed all the equipment from the frost-covered bank, moving back to the hut. It was pretty tight coming in but luckily it landed and one of the medics jumped out and made his way to the hut to assess Jon. It didn’t take long for the him to decide that Jon needed to be airlifted to Palmerston North hospital.

We had hoped that Anna might be able to fly out too but unfortunately the helicopter could only take one person. As Jon got helped into the helicopter, we nearly forgot to pass on the emergency contact information we had written down but luckily managed to get it into his bag at the last minute.

As a final request before leaving, the helicopter crew asked if we could chop down a small tree on the bank. This had been blocking their descent into the valley and was very close to the helicopter rotor blades. They said that in future they might not be able to get in if the tree stayed standing!

The helicopter pulled away just before 9:10am. Karl set about chopping down the errant tree while Anna and I began redistributing the extra gear she had taken in case she could fly out.

Given the situation, we didn’t want to waste too much time and got ourselves ready to walk out by 9:30am. Karl had kindly agreed to accompany us back up the track. We were very grateful for this as, with only the two of us left, the stakes if one of us got sick was much higher.

We hoped that if we could get up to the tops there would be enough cellphone reception to check how things were going.

We made steady progress and despite the chilly start in the valley we soon warmed up as we got climbing and reached the sunlight. We all agreed that it was easier to see your feet in the tussock going uphill rather than down.

When we eventually made it to the Rangiwahia track junction at around 12:45pm we got reception and could give the Easy group a call. The trip leader knew all about our situation. However, we were surprised to learn that they had also needed to helicopter two of their people out with similar symptoms. Luckily, with cellphone reception at the hut, they were able to talk with others first rather than pulling a PLB.

Though the helicopter wasn’t able to take their tramping packs. So we agreed that after some lunch on the tops the three of us would walk down to help the group carry all the extra gear.

After 20-30 mins for lunch we sped down the hill, getting to the hut after about an hour from the junction.

The Easy group were very relieved to see us and we set about deciding how to distribute the gear from the two extra packs. Karl took one half emptied bag and made his way down to the carpark where he left it next to the club van. Anna, looking like a mountain mule, carried the other half-emptied pack in addition to her own.

We set off at a steady pace trying not to slip on the frosty patches on the ground. One further member of the group began feeling unwell halfway down the track and luckily a passing member of the public was able to take this tramper’s bag down as well.

Knowing we had good cell signal, we then decided to split into two groups, with the Easy trip leader helping the sick tramper. The rest of us continued down to the van, where some of us would then be able to return up the track to help.

Luckily, the sick tramper made good progress and we got to the roadend by around 4:45pm.

After getting ourselves sorted, we set off in the van, navigating the windy roads through to Palmerston North. Here we picked up the other three sick trampers, who had discharged themselves after waiting a long time in the busy hospital.

Given the circumstances, no one was remotely interested in a dinner stop on the way back and we returned to Wellington at around 8:30pm. After such an eventful trip we were relieved to be safe and dry in our own beds.

We are all grateful to Karl from Triangle hut, the Palmerston North Rescue Helicopter Trust team, and members of the public who assisted us over the course of the weekend. We’d also like to thank Amelia (our emergency contact), Sarah (emergency contact coordinator) and other members of the WTMC committee, who got an alarming wake-up on a Sunday morning! We greatly appreciate everyone’s help and assistance.