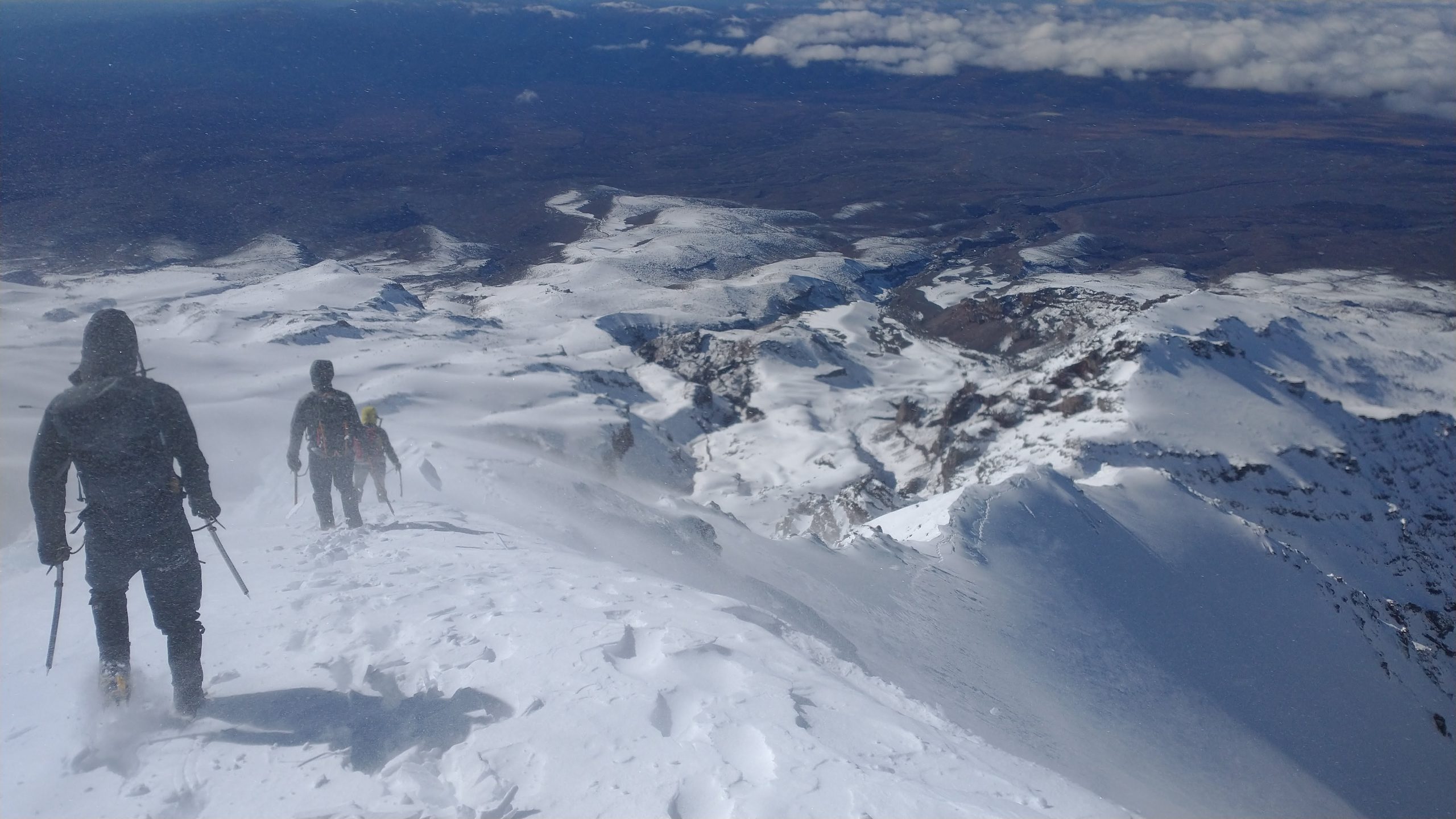 Excitement was in the air as we left Platform 9 at 5pm on Friday – we had a great group, a promising forecast and a full moon to look forward to. 4.5 hours later we turned on to the Tukino Access Road. It’s a bumpy ride at the start and in wetter conditions could be a real challenge for a 2WD, but it does ease off after the first kilometre and we got the Ford Focus to the lower car park (2-3km east of the Round the Mountain Track) without too much trouble. At this point, the five of us plus packs inhaled hard and squeezed into Sophie’s mighty Toyota Raum for the 4WD section to the track itself.

We then had a beautiful two hours to Rangipo Hut. The second hour was on snow, and with clear skies and a full moon we didn’t need headtorches at all. We had even considered dropping gear at the hut and continuing straight up the mountain, but with some unknowns around steepness, wind and ice, we decided on an early morning instead.

Saturday – Rangipo Hut to Ringatoto via East Ridge and back

We were out of bed at 5am, and with some extra faffing time needed for melting snow to fill bottles (the tank had frozen) we left the hut at 6.30am. By this time it was light already, and we enjoyed a beautiful sunrise shortly after 7am.

Our route took us roughly West-North-West from Rangipo Hut, through pt 1873 and pt 2123. The ridge doesn’t become clearly defined until about halfway between these points – we had clear weather but in low visibility it may require some more careful navigation to find the ridge. Once on it, it’s easy to follow, and although there are a few gendarmes these can be pretty easily avoided by dropping down a little on the south side of the ridge.

Conditions were fine, with blue skies, although a stronger-than-expected southerly wind whipped stinging ice crystals into our faces whenever we walked on the ridgetop. A low freezing level and relatively dry weather in the previous days had made the snow loose and dry. This made the steeper snow slopes on the East Ridge less intimidating as we were able to plug steps without worrying too much about losing our footing. It had the opposite effect on the 2-3 sections of scrambling above 2200m, where we found ourselves climbing rock covered by a few inches of loose powder. We couldn’t see any obvious way to avoid these crux sections, which aren’t too difficult but do require some confidence and would be more challenging to downclimb. Each of us used two axes.

It took us 4.5 hours from the hut to the summit of Ringatoto. There is a natural extension on towards the summit of Tahurangi, but with DOC currently advising against travelling within 1.5km of the crater lake we had decided against this option. Our hopes of a scenic summit lunch were also thwarted by the relentless wind, so after a few quick photos we began our descent.

We descended by retracing the ridge for 10 minutes until the gradient eased and we could drop off it to the right. From here we headed due south towards a prominent cliff below the skyline, eventually joining the bumpy ridge east of Girdlestone. We passed about 300m south of pt 1778 and headed down towards the Wahianoa River.

As we descended the easy snow slopes in the sun we all dropped our guard a little, and were sharply brought back to reality by Tereza pointing out long cracks shooting out along the snowpack under our feet. The avalanche forecast was Moderate, and with only a dusting of new snow in recent days we hadn’t been too concerned. However, the forecast had stated that testing had only been done at Whakapapa and Turoa, and we were now seeing with our own eyes one of the risks of visiting the more remote east flank of Ruapehu. We paid more attention to our route from then on and went one at a time in places, and we could see evidence of slab formation in the snow-filled gullies.

We made it safely down to the Wahianoa River where we rock-hopped our way down to the swing bridge on the Round the Mountain Track. On the way we passed some spectacular rock formations on the cliffs on the true right, long rock prisms which someone said were cooled basalt crystals.

We made it back to the hut around 4.30pm and spent the rest of the evening eating, melting snow (credit to Henry for endless trips outside) and chatting to members of Auckland’s Manakau Tramping Club. WTMC Spicy Chickpeas was on the menu, and I managed to get all the way to the end of the recipe before knocking the entire billy of food into the sink. Some quick thinking from Sophie and a brief suspension of general food hygiene principles by everyone else and we were all eating happily a few minutes later.

We had a lazy morning and left the hut around 9.30am. Our legs were feeling the exertions of the day before so we had decided to head straight to the cars, but there were inviting glimpses of tempting objectives on the way back, particularly on the southern aspects of Girdlestone and Te Heu Heu. Something to come back for!