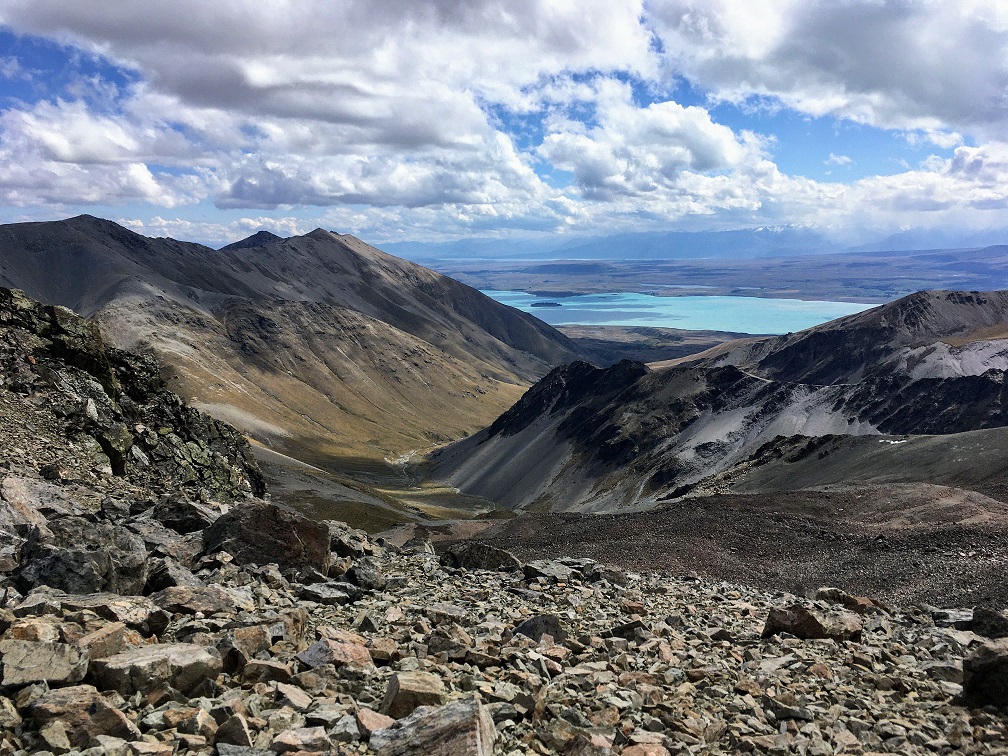 As is a common occurrence, this trip started life as three days of perfect weather camping in the basin below the Dasler Pinnacles and attempting to climb one of the Pinnacles.

Of course, the weather made us consider a few alternatives as there had been some significant rain during the week previous, which meant we had no chance of crossing the Hopkins River to get up to the Pinnacles. Second option was Rabbiters Peak, third option was a second stab at Gunsight Pass but we plumped for an adventure in the Two Thumb Range just north of Tekapo where the weather was due to be dry if a little windy. It’s no fun climbing stuff in the rain – and we had flights home from Christchurch so we needed to head north regardless. With the late change of plan, we were lacking maps…but Tony had managed a quick sketch of our route (see photo) so everything should be fine!

We landed in Queenstown, picked up two hire cars and drove north to a DoC campsite just alongside one of the hydro-scheme canals before the turn-off to Mt Cook village. It was after 1am when we were in our sleeping bags.

A short drive to Tekapo and along the Lilybank Road in the morning brought us to the Richmond Trail section of Te Araroa. We walked the first 5km on the track and then continued up Boundary Stream to the right when the track took a left turn. Working our way upstream but on the terraces above the river; sometimes flat, sometimes sidling. We saw two wallabies and multiple hares in this section of the valley. Further up the stream we identified the saddle above us (between Point 2086 and 2040) that we were wanting to head for. Our progress was slower than expected and it was 2pm by the time we started the 600m climb to the saddle. We estimated we could still make the hut before dark thanks to the long daylight hours but we would need to keep moving.

A mixture of scree and tussock characterised the first part of the climb, with a feature waterfall dropping from the basin above. The second half was larger rock scree and took us all the way to the saddle on the Two Thumb Range where we were treated to a great view of Mt Misery, which was our target for the next day. The ridge up to it looked straightforward but never-ending, and the ridge along which we planned to descend to re-join the Two Thumb Range looked complex and time-consuming, so while we waited for everyone to regroup at the saddle we started to think about alternatives.

More pressing was our more immediate route plan. What looked on the map like an easy 60m ascent along the ridge to the high point from which our planned spur (just north of Point 2040) exited, was in reality quite a rocky mess. Given our group pace over the rocky scree up to the saddle it would take us at least another hour just to make the spur junction, and an estimated two more down to Sugarloaf at the tip of the spur. From there we would still have a 600m steep descent to the hut – perhaps now in the dark. An alternative was to traverse across the scree to join the spur below the junction thereby skipping the rocky mess on the ridge line. That would also have taken too much time and some of the group had already had their fill of scree for the day. So we settled on a direct descent into the valley floor with the intention to camp at the first flat-ish spot we found with a water source. A couple of hours later we’d found a 10/10 (caveat: given what we had to choose from) spot next to the river at the valley floor. After hot drinks, backcountry dehy and some delicious fancy flavoured chocolate courtesy of trip leader Aimee, we were all getting some well-deserved sleep. It was dry and warm(ish) and nobody minded that we hadn’t made it to the planned hut.

In fact, given what we’d already seen of the ridge walk up Mt Misery I was pretty happy that our resting place for the night meant we’d be ascending up the valley to re-join the Two Thumb Range further north the next day.

Next morning we were good to go before 9am despite the billy toppling over mid-boil which meant everyone had to wait a bit longer for their coffee. It was easy travel up the stream flats for much of the way with the odd section requiring a little more thought when the sides steepened. At one point we stopped to swap some weight around to enable us to maintain good forward progress as a group – we were getting quite strung out so it was a good call. As we continued up the valley a growingly agitated group of gulls were flying above us – we were walking past their nests which were on an island in the middle of the stream – we could see chicks. This added to the fauna list we were seeing on the trip.

By lunchtime we’d made our way up a grassy tongue into a basin just below the ridge of the Two Thumb Range. A sheltered dip complete with soft tussock and less-soft Spaniard proved a good spot for lunch. The views back down the valley were beautiful and we could congratulate ourselves on having made good decisions the previous day to lead us to this lovely spot.

After lunch we had less than a 100m climb to re-join the ridge (between Point 1973 and 2187). I think every one of us exclaimed some sort of ‘wow’ as we popped up onto the ridge – we were greeted to a fabulous vista including the prominent Caroline Face of Aoraki Mt Cook. Looking back we got confirmation that accessing the Two Thumb Range from Mt Misery did look trickier than anticipated so once again we were glad we came the way we did.

The plan from here was to drop directly down into the valley via the scree slopes – I was looking forward to a fun escalator ride – but the slopes weren’t a clear run all the way down so to be safe we continued along the ridge up to the high point of the Round Hill Skifield and descended from there on some gentler scree, and then crumbly-stepped tussocky soil. We dropped all the way down to where Te Araroa crosses Camp Stream and found some good flat spots to camp. One plan had been to continue up Camp Stream to Camp Stream Hut for the night, but the recent rainfall meant the stream was on the high side so we preferred to camp on the side we’d need to be walking out from the next day.

We went about setting up another comfortable camp for the night, re-hydrating the next round of Backcountry meals and tucking into the marshmallows also provided by trip leader Aimee. We’d chosen to go for the quick and easy dinner options on this trip rather than cooking fresh meals due to ‘end-of-year-craziness’ meaning no one really wanted to think about planning or shopping for ingredients. The lighter packs and no washing up were a bonus, whilst the square “meat” is the penalty price.

Next morning we packed up and walked out the 15kms of almost all flat and well-trodden Te Araroa back to the car on the Lilybank Road, arriving seconds before the rain started. We rewarded ourselves with coffee and a pie in Fairlie, then drove on back to Christchurch for our evening flights back to Wellington.

The Two Thumb Range proved a great alternative to our original plan. And as usual, this trip spawned many more trip ideas. There is Mt Misery to negotiate one day and South Opuha Hut to visit too, for which a good loop might be found via the Stoneleigh Saddle…just don’t sign up if you don’t like scree!