Saturday morning was sunny but quite cool when we emerged from the van at the road end. Extra layers of clothing were quickly added. Our track was a 4-wheel-drive route, at times deeply rutted and beginning with a huge muddy pool. We walked downhill through regenerating bush to the first of 10 river crossings and then along the valley to Sutherlands Hut – about 3 to 4 kilometres. 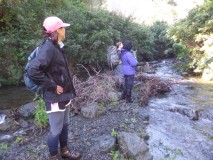 The hut was empty when we arrived but clearly three of the seven bunks were already taken. Hunters, perhaps? After a quick lunch outside in the sun, we set off for a day walk. Our aim was nearby Mount Ross (981 metres), the highest point in the Aorangi Range in the south-eastern Wairarapa.

From the hut there are two possible tracks up to the ridge that leads to Mount Ross, and both meant retracing our steps along the river valley. We chose the closest, an unnamed track. According to the map, this route follows a tributary river for a couple of hundred metres before heading straight up to the ridge with steadily increasing steepness.

One minute along the first track, we came to a river. The map showed the track cutting diagonally across the river, however, we could not find the track on the other side. Elaine climbed the bank across from the track, and pushed through the brush looking for a possible track but only found tangled undergrowth. Michael surveyed the downstream area, to no avail. David walked some way up the river and couldn’t anything likely. He reported the river as knee-deep – on him – but deeper for the shorter people in the group. 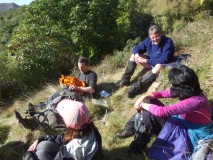 But having abandoned our first trail, the second route also proved difficult to locate. We hadn’t noticed the track junction on the walk from the carpark to the hut. After consulting the map and scrutinising the topography of the hillside opposite, we eventually arrived at a small cairn beside a steep, grassy channel.

We descended to the river, crossed, and headed up the bank on the other side. While the track is marked, sometimes the markers were far apart. A short way up we came to a more difficult section with a steep, somewhat crumbly bank criss-crossed by exposed tree roots. Everyone seemed to find it reasonably straight-forward – apart from me. I got half way up and then took a very long pause while I worked out how I’d heave myself over the last part without losing my balance. 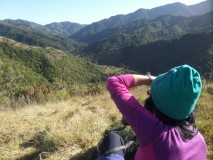 The rest of the way was a steady climb up an open grassy hillside with patches of scrub and trees. David decided to stop part way up to relax in the sun, while the rest of us toiled upward. We wanted to reach the ridge, and if possible, to walk along it to Mount Ross. Higher up, the grass looked oddly trampled. When we reached remnant patches of snow we realised the big dump of snow a week earlier was the cause. It didn’t take long before chunks of snow went flying.

At 3pm Pete said we could ascend no further or we’d run out of daylight for the descent, so we headed back to where David waited. There were few birds around but we did notice a kereru gliding between trees on the upper slopes. As expected, the steep bank proved just as troublesome for me as on the way up, but David kindly advised on foot placement. 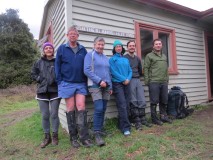 Back at the hut, the evening chill already settling in, our first objective was getting a fire started in the open fireplace. Not long after, the three hunters turned up after an unsuccessful hunt; they were pretty chuffed to find the fire already blazing. Although the fire burned well enough – the fireplace was quite well ventilated – the hut interior remained cold enough to see our breath.

Some of the mattresses looked a bit grungy. I wasn’t keen to lay out my sleeping bag but a ground sheet made a suitable cover. There are no ladders to the top bunks, which are higher than usual. Erika found she couldn’t actually get onto hers. One of the hunters offered himself as a human trestle but Erika opted for a lower bunk. A good move, as it turned out, because the upper bunks’ saggy springs made for an uncomfortable night’s sleep.

Elaine planned to sleep under a fly. She did her very best to entice the rest of us to enjoy the delights of a starry night and fresh air, but there were no takers. Nevertheless, despite the fly partially collapsing after a rare wind gust, she spent a very cosy night outside.

Saturday’s beautiful clear day gave way overnight to an overcast sky and rising wind. As rain was expected from early afternoon, we didn’t linger in our bunks but set off fairly early. We chose a different route back to the road end and after a mere three river crossings we headed up a ridge towards the hill-top named Iraia. Although this was a walking track, we met the three hunters returning on their quad bikes from another unsuccessful hunt. Other hunters were also out in the hills and we heard several reverberating gunshots as we strode along. The track passed through grass and scrub on the way up, and then through older native forest. At the road end we stopped for lunch before heading to Martinborough for coffee and cake – a very nice way to end our tramp.