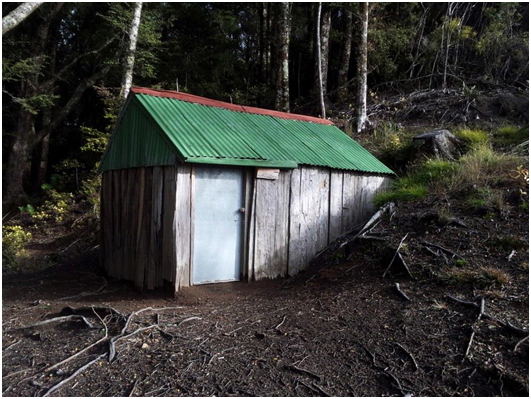 We all met at the railway station and got going at around 5:30pm. We were not in a rush as we were not going to the road end tonight. We stopped in Masterton for dinner, then onto Hastings, sharing the driving and passing the time with chat and a few hours of what we called the “lame joke session”. Loads of laughs were had. Before we knew it we arrived at Maarten’s sisters’ place where we stopped for the night.

We arrived to find a fire blazing which was nice, and found a spot to sleep. We took it easy in the morning, patted the nice dog and cat and Maarten spoilt us with yummy croissants for breakfast!

We left and drove to the Kaweka Ranges, which takes about an hour. We were all so looking forward to the hot pools, but 60 km from the planned road end we saw a Hastings District Council sign that said the road was closed due to flooding and snow.

We now had to come up with a plan B for the weekend. It was suggested that we could get to Middle hut and other Bivs from Makahu Saddle, a road end near by. It was the next best option in the area and we would try the Hot Pools on Sunday if the river had dropped.

When we got to Makahu road end, we met the Medium and Fit groups who camped out in the cold on Friday night. The new plan for the Medium group was to go to Middle Hill hut so we could not do this anymore as they needed to try to get close to an M grade, so Maarten had to adjust the plan again. The next plan was to go to Kaweka Flats and Iron Whare Bivs for the day, then back to Makahu hut for the night.

We rearranged our bags and left most of our gear on the bunks, just taking the essentials, safety gear and lunch. The track was relatively flat with a few small rivers to cross. Kaweka Flats Biv was only 1h 30 min away, which was the perfect spot to stop for a bite to eat. The clouds opened up and we had a sunny spot for lunch! We compared lunches and had a good chat in the sun and we were hopeful the rivers would drop on Sunday. A few people thought Kaweka Flats Biv was the perfect location for a romantic getaway.

We walked on further to see the oldest biv in the Kawekas – Iron Whare, which was 40 min away. Iron Whare was built in the 1870s by the Halletts of Puketitiri as a musterer’s hut. James Hallett first took up land at Puketitiri in 1865. In the nineteenth century pastoral farming was the dominant land use in Hawke’s Bay and the tussock land on the ranges was grazed. We enjoyed the great view from this hut.

We retraced our steps back to Makahu hut where we played games and ate pre-dinner snacks. It was a lot of fun with many laughs. The temperature dropped very quickly and we were all thankful for the volunteers from our group who spent ages collecting and cutting fire wood. A small group of hunters came in to see if there was any room but with 9 of us with only four beds the hut was full already (and very cosy).

Everyone pitched in to prepare the pesto pasta dinner, which was great. For dessert we were all surprised with a lovely banana cake that Maarten made. Topped with cream and fresh bananas, with a hot drink by the open fire was a very satisfying end to the day.

It was a very cold and frosty morning, and the two choices were to go to Dominie Biv and possibly up to Kaweka-J, or try the hot pools and walk the Te Puia track. Hot pools it was, but when we got to the Makahu river ford, it was a very fast flowing river with no chance to get across. It had stopped raining on Fri and the rivers were going down but the Makahu is one of the bigger and longer rivers starting at Kaweka–J and flowing into the Mohaka, so takes a few days to subside.

As we had come all this way, we were all in agreement that we should make the most of the day. The first stop was a coffee in a scenic location, then we did the biggest loop at the Te Mata Peak Park in Havelock North. This would give us some more walking time, and an excellent location for lunch.

The last stop on the way home was afternoon tea at a café in central Hawke’s Bay where some of us discussed future trips and studied the trip schedule.

We got back to Wellington in good time where we parted ways.