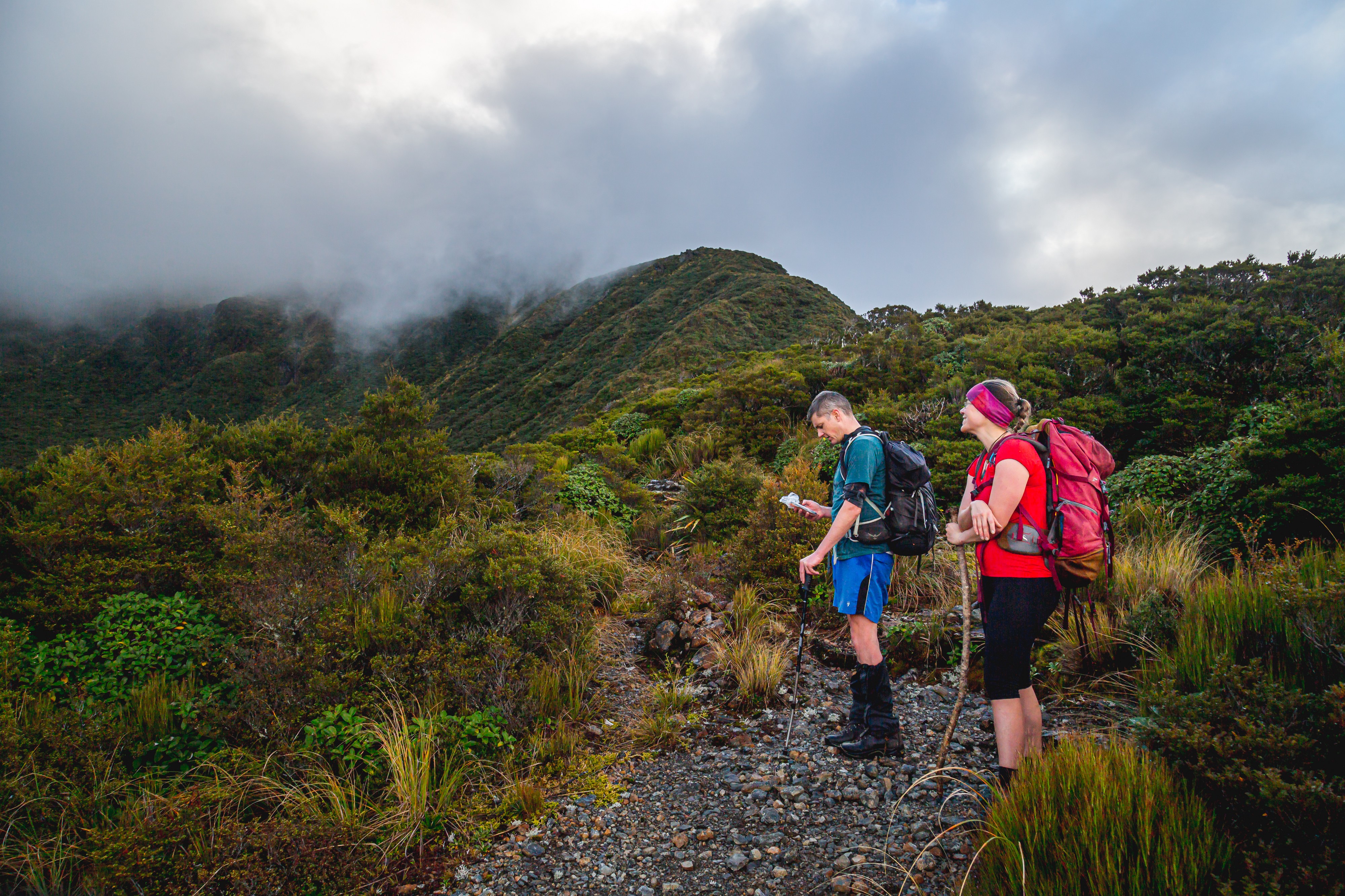 Bleary eyed I emerged from my car at Takapu Rd Station. Here I encountered my first obstacle: getting into the WTMC van. This was was far too difficult for half past six in the morning, taking a swift blow from Richard’s boot to finally dislodge the door from its jammed state. At Wellington Station we picked up the rest of the crew, making five of us total: Tereza, Monique, Richard, Juliette and myself (Sam). Soon we were winding our way over the Rimutakas through an exceedingly dense patch of fog. Well we think it was fog, there were some good cases being made that it was in fact a cloud. What’s the difference? I don’t have the foggiest idea.

Instead of the weather becoming better over the other side of the hill a thin mist of rain was falling when we stumbled out of the van at The Pines. Boots were hauled on, straps tightened and final prayers uttered, then we were off. That first section of the walk was rather boring, spent trying to walk five in a line and invariably leaving an awkward person out in front. Before long we entered the bush and started on the track to Mitre Flats proper. We had to keep an eye on Richard, who was gleefully skipping down the track every so often.

About a half hour in to the forest the party stopped for a korero. Our stated objective on this tramp was Mid-King Bivvy, but at the rate we were walking there it wasn’t looking likely this side of Christmas. This being so we decided to split into a fast and a slow group. The latter was to stop at Mitre Flat and was given the ever so important job of making sure the billy was on when we got back. Tereza, Richard and myself waved the others goodbye before setting off at a cracking pace down the track.

The hut was empty but for a few sleeping bags and packs. We made ourselves comfortable outside, devouring our lunches and enjoying the task of finding heavy things to leave behind at the hut. After half an hour of joyful faff we set off again, this time passing the bridge across the Waingawa and heading up the true left (TL) of South Mitre Stream. We mucked our way up the stream for a few hundred metres, splashing in puddles and not being too overly enthusiastic about the endeavour. Then Tereza made the excellent navigational decision of crossing to the TR and climbing up to the flat bush on the side of the river. This made for much faster going and soon we picked up a trail left by previous trampers with the odd bit of marker tape. The route crossed Baldy Stream before turning up a spur to the East. This signalled the start of our slow steam upward, the air filled with much huffing and puffing.

We meandered up the spur, occasionally losing the trail we were following before discovering a new one. As we ascended the thud of helicopters started to reverberate around the valley. We made good progress up the spur and soon we were breaking above the clouds, then emerging above the bushline.

From our position in a clearing out of the trees we could get a view of the ridgeline, partially hidden in moody grey mist. Soon we came across an actual track marker, jumbo sized too! This led us down the steep and slippery track to Mid King Bivvy, in the headwaters of Baldy Creek.

The bivvy itself was a cheerful orange colour, standing in a a clearing flanked by crooked moss covered trees. Inside it smelt a little moist, but I’m sure it would be more than adequate shelter from a storm if needed. A large water bottle had been left at the hut so we refilled our water bottles with this. A few snacks later and we were getting mighty cold so all agreed it was time to get back to Mitre Flat Hut for dinner.

After the sharp grunt up to the spur we started back down the bush, making record time. I went out in front to crash a path through the bush, with Tereza in the middle and Richard keeping up at the back. In this fashion we made great time and after only a few minor spills we were back down at South Mitre Stream. This time we stuck on the true right, following various trodden trails all the way to just before the bridge where it became more of a bushbash. Soon we were bouncing into the hut clearing, greeted by a number of young people lazing out on the deck. It was only 4pm so we joined our neighbours in cooling off outside.

Once the cold began to bite we headed back inside where a great hive of activity was taking place. Juliette volunteered to cook the creamy salmon pasta and I can hand-over-heart say that it is one of the nicest tramping meals that I’ve ever had! Before it got dark the hut had another visitor: a heli swooping in to land on the grass out the front. This was much to the dismay of Richard, who watched in horror as his tent poles flexed and buckled in the down-draft. Luckily for all involved the tent stayed put and the heli successfully offloaded its cargo, a DOC worker with an axe, presumably there to clean up after their drop. We spent the rest of the evening yarning around the table, especially amused by the dynamics of the other group. One of them had demanded that the others bring real milk with them, and so sat there a 2L bottle of milk. They then skilfully traded this to attain whatever luxuries everyone else was carrying, mostly biccies.

The following day we were up in reasonable time, ready to start on out way back to the Pines. Our morning’s entertainment was watching Richard eat his breakfast with the end of a dish brush. After breakfast Monique set off first (and wasn’t seen again until the other side of the forest) followed by the rest of us 10 minutes later. Everyone mustered various speeds along the track, some feeling the effects of the trip up to the bivvy more than others. It was about 11:30am by the time we were all back at the van, our eyes (and stomachs) on the prize of a pie on the way home. Crossing over the Remutakus was an almost spiritual experience as with pies in hand we collectively (and completely out of tune) belted out “Country roads… take us home…”
What more could you ask for from an after tramp van ride??