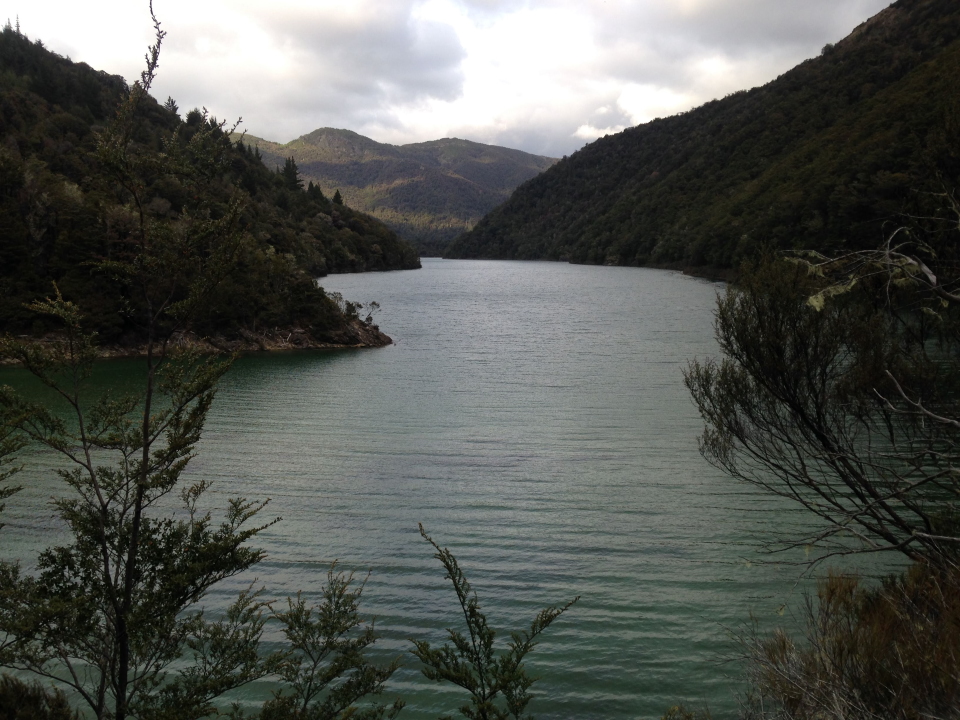 On Friday afternoon I met with Elly our trip leader at 2.30pm at the car rental office to collect a fancy SUV. We drove to the train station to get Matt (whom I have been tramping quite a lot with on recent club trips) and Nicole who is a colleague of Elly’s. We arrived at the ferry terminal a bit after 3pm, checked in and departed at 4 pm. We arrived about 7.15 pm in Picton. It was a 2 hour drive to our road end and darkness set in while we were driving. There were a few trees that blocked the road – I volunteered to push one aside . (On the way back by daylight we saw that we could easily have driven past it.) We arrived at the road end by 9.15 pm. We put our boots and packs on and walked to Chalice Lake Hut. The DOC sign said it would take 1 hr, we did it in about 30 minutes. A family of four was already in the hut but we fitted nicely in the remaining four empty bunks.

On Saturday we got up at 7am and had breakfast. We had to decide which way to walk the Old Man Hut loop: we expected clockwise would mean a shorter day on Saturday (when rain was forecast from early afternoon onward) and have a nice but longer day on the tops on Sunday, when we needed to get to the ferry in time. Or anti-clockwise. We decided to do it anti-clockwise.

The weather was fine when we left. First we walked along the lake. Then the track got steeper, and we got hot and sweaty. But after gaining some more height and arriving on the ridge, there was a strong and cold wind. Navigation was not a problem. We could see Old Man sometimes, other times it was hidden in clouds. When we arrived at Old Man, some rain drops started to fall. The wind had become quite strong. It almost felt like we were home in Wellington. From Old Man we were on the Te Araroa (TA )trail with a nice ridge walk and some exposed ‘climbing’ sections. The rain drops slowly changed into light rain. At some point we followed the track down from the ridge and arrived to the turn off for Old Man Hut.

The rain was getting heavier so Matt and I made our way to the hut without any further delay, where we hoped to find four empty bunks again. When we arrived at the hut, there were already four other trampers that were doing the TA. They came from Slaty Hut and decided to stay out of the rain and strong winds in Old Man Hut and venture on to Rintoul the next day. They got the fire going. Elly and Nicole arrived after a short while. We had a good time with the TA-ers. Then we got the food going. Two of us ended up sleeping on the floor, while two had bunks.

The next day we got up at 5am for a departure at 6am. After an hour or two, it seemed we wouldn’t make it to the ferry in time. We redistributed the walking poles and some weight. All in all, we managed to keep a decent pace and progress well within the required time frame/schedule, including a few breaks for snacks and lunch. We crossed a few rivers with crystal clear water and passed a few waterfalls, which were quite beautiful. It would have been more tricky if there had been more rain. We arrived at 1 pm to Lake Chalice Hut. The track from the hut to the road end was now up up up and takes about 1 hour as per the DOC sign.

At 2 pm or so we were on our way to Picton, where we had coffee, beer and pizza at Cafe Cortado. The ferry was delayed so we arrived into Wellington at 10.30pm instead of the hoped for 9.45. We had some muscle soreness the next day, but nothing too bad.

Thanks everybody for a great trip, above all Elly for organising it.