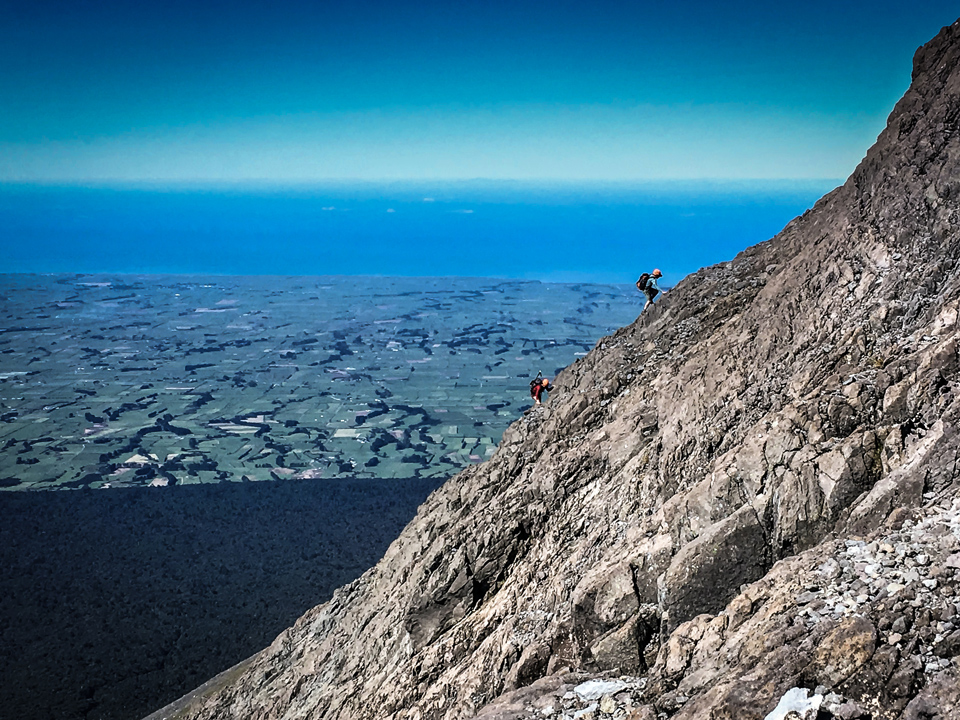 Ten of us drove to Taranaki/ Mt Egmont on Friday evening and camped at a picnic spot along the North Egmont Road. Saturday was forecast to have a strong southerly wind with a minus 10 degrees C wind chill on the summit, while Sunday was forecast to be an absolutely stunning day. Needless to say, we deferred the summit until Sunday.

As a Saturday day-trip to fill in time, the Pouakai Circuit was suggested. The day was gorgeous and we set off at a steady pace. Soon the mountain came into view between the trees and I finally got to see what had been hidden in the clouds the only other time I had been here. We walked to Holly Hut in about 3½ hours over the Kokowai and Holly Hut tracks. After a quick water stop we continued on to Pouakai hut.

At this point I lost a bet against Tony and ended up as the designated person to write this trip report. I thought it would take us 2 hrs to Pouakai hut but we walked it in the just 1½ hrs. Since I was walking at the front of the group I probably should have just walked more slowly…. We all had lunch and a nap at the tarns along the Pouakai track where we posed for a photo that is now on the home page of the club website. Then we climbed up the very many steps to Henry Peak, and from there it was a big downhill and then a long slog through the forest back to the road end. We arrived back at the van after a grand total of 9 hrs, and everybody was pretty happy to have arrived. Nobody felt like cooking, but luckily Tony had already predicted this in the trip plan so we all sat down together to enjoy our own ‘gourmet’ instant dehy meals. After these ‘excellent’ meals we all piled into the van and headed to the East Egmont Road end for an early night camped next to the road.

On Sunday we woke at 6 am and packed away our tents in the dark. Since the road end is at about 1,100 m above sea level the night was quite cold and so was getting up before sunrise. From the East Egmont Road end it was a quick walk through the sunrise to the Manganui Lodge and ski tow where we all shed multiple layers of clothes before beginning on the long climb up. As we set off up the line of the ski tows I seriously wondered what I had gotten myself into. A seemingly never ending mountain of rock loomed above us, and my helmet swayed back and forth on the back of my pack to remind me that I would be scrambling up most of it with hands and feet. But as we slowly trudged up the steep incline I thought to myself that it was doable—I just had to take it one literal step at a time. After a mid-morning tea break at about 1,600 m, we donned our helmets and started on the real climb. From here on up we were climbing an old lava flow. And, it was actually a really fun scramble! Tony kept saying that there was no right or wrong way up, and he was basically right. Everybody just found their own way and there were good footholds and handholds all the way. It never felt too scary or too steep, and we saw two other people on the way up which suggested that we weren’t completely crazy for going up this route.

Then, suddenly, those of us at the front reached the summit! Except that we looked over and saw lots of people on a slightly higher proper summit at the other side of the crater. And from our perch, the Shark’s Tooth, it was a 50 m sheer drop to get down into the crater. Not really an option. So we all huddled on the top of the Shark’s Tooth and ate our lunch until Tony, who was the only one who knew the way, got to the top. And you really did need to have done it before. We would never have expected to find a chimney in the rock a little way along from the Shark’s Tooth that delivered us easily and safely down into the crater.

After some summit photos, we walked/’skied’ down the scree slopes of the main summit track while debating the virtues of using walking poles. Some group members really had the walking pole aided skiing thing sorted and vanished off into the distance. I was glad that we hadn’t taken this route up. It didn’t look fun at all to climb two steps up, slide one step down over the scoria. Nothing like our adventurous scramble! At Tahurangi Lodge we turned off onto the track back to Manganui and had an enjoyable last hour tramp back to the car park. Like the day before this day was also 9 hrs but somehow we all felt more energetic at the end. Maybe because we had been tramping/scrambling/skiing instead of just tramping.

Thanks to Tony for leading a great trip that requires lots of experience on this mountain! And thanks to all for a wonderful day!