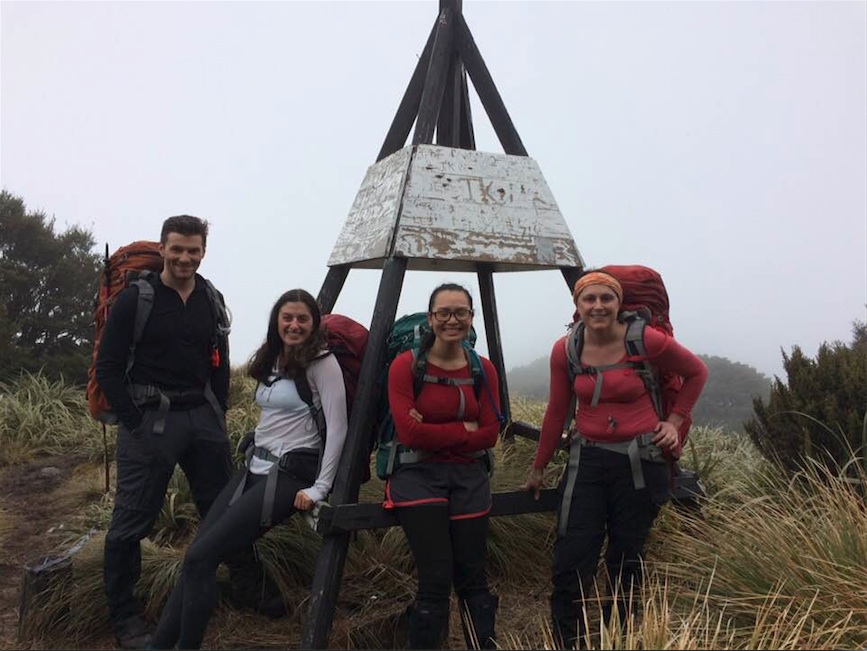 In one of our first trips together, Caryl and I signed up to Maarten’s “Easy-Medium” to Renata Hut. Unfortunately we only made it as far as Kapakapanui Hut on that occasion, so we both felt we had unfinished business with Renata Hut. When I saw it on the winter schedule I thought leading it would be a good way to make sure I got there.

We joined the Easy-Medium group in the van on Saturday morning at the very un-easy time of 7.30am. I strolled in early, feeling organised, until Steph started talking about “cooking” and I realised I hadn’t packed my cooker and gas! Some expensive uber rides and a sweaty 15 minutes later, I arrived back at the station with cooker and gas, only to have wasted the head start I had so carefully negotiated with Easy-Medium!

Clinton very kindly drove us to Ngatiawa Road End where the Kapakapanui track begins, and we were underway before 9am. I always forget how many stream crossings there are at the beginning of the track (maybe 9 or 10?), so it wasn’t until after 20 minutes of climbing that I felt it was safe to sit down and empty boots of river water.

The climb to Kapakapanui (clockwise direction) is reasonably steep for the first hour. We were pushed along by some furry four-legged friends who delightedly chased us up the hill, leaving their owners behind. The next hour and a half was either a gentle climb or flat, until just past point 755 (we saw no sign of the track that is marked on the map as branching off here?) Then it is another half hour climb to the hut itself. We arrived at 11.45am, in time for a leisurely lunch in the rather cold hut.

From Kapakapanui, it is another hour or so climb through some splashy muddy bits to the top, and them 20 minutes along some exposed bits and forested bits to the trig. As has been my experience on the two other occasions I have been at the trig, we could see nothing but cloud. We took the turnoff after the trig to Renata Hut, which promised another 3-4 hours of tramping. This was new territory for me, and I was rather surprised when we came out onto an exposed grassy slope, which, had the cloud not been there, would’ve given us a rather nice view of the hills beyond.

Once below the bush line Steph took the lead, getting us safely down a rather steep descent. Although the track was a bit overgrown in places, the orange triangles were well placed to keep us heading in the right direction. From the base of the descent there was some meandering small hills and flats for a couple of hours, until we stumbled out at Maymorn Junction. Although not visible to the naked eye at the time, the Waiotauru fairies had come out and marked the track especially to show me the way!

We were relieved to make a landmark at this point, and stopped to admire one of the few views we got that day out to the East through the clouds. I promised the crew that Renata Hut was only 30 minutes away. Unfortunately that 30 minutes stretched into 40 minutes, especially as Tracey and I became rather disorientated at the back – we felt we had descended quite a way – more than we were expecting – but continued on once her phone confirmed our correct height. We were all very pleased to see the red shed of Renata, exactly eight hours after we had set out from the road end!

Renata Hut is not the most attractive of huts. When I described it to a fellow tramper as a “yucky” hut, she protested that it was “rustic” (which amounts to the same thing in my opinion!) It has a concrete floor, open fire and sleeping platform with some rather mouldy mattresses (bring your ground sheet to sleep on). But after a longish day on the feet, anywhere that is dry and sheltered seems luxurious. Plus we saw and heard no signs of rats. Bonus.

Steph and team quickly got dinner going – quinoa and vegetables – and Patrick attempted a fire (although firewood was scarce). Meanwhile I puzzled over how we would get back out. My original plan had been to retrace our steps. However, this had taken us 8 hours on the way in, which would mean getting up at 5am to leave by 6am, if we were to arrive back at the van at the 2pm agreed time. I felt that was a rather aggressive start for one of my trips! Another option was to take the 4wd track out to Akatarawa Saddle and text the easy-medium group to come meet us. A third was to take the 4wd track part way out to Akatarawa Saddle, but take the correct turn north onto another 4wd track, which would lead us back to Ngatiawa road end. We decided on an up-at-6-away-by-7 start, and to delay any decision-making until we were back at Maymorn Junction!

We were up on time and waddled away from Renata Hut around 7.15am the next morning. We got back to the junction in exactly 40 minutes, and it was decision time! The rain had already set in, and bodies were weary, so we decided to take the 4wd track. My main concern about this route was finding the correct turns, and perhaps inadvertently stumbling onto private land. About half an hour down the track, we came across a man camping on the road side, who very kindly gave us directions and said that the man who owned the 4wd track at the Ngatiawa road end would not mind trampers like us walking on it. Imbued with confidence, we now struck out along the track, carefully counting the right hand turns (we were looking for the third). Only, when we got to the third turn and took it, it led to nothing but an upside down burn out old car and a dead-end! We retraced our steps and took the next right-hand turn, only to find this path had multiple side-tracks as well, in both directions! By this time I had mentally given up on finding the correct turn-off to the Ngatiawa road end, and decided we should stick to the widest track with vehicle marks on it to make sure we got out…somewhere!

Just before 12pm we popped out at Akatarawa Saddle. I sent the leader of Easy-Medium a text, hoping that they would get out early and come and meet us. Unfortunately, they were trying to give us as much time as possible and so were not out until exactly on 2pm, by which time we had almost walked down Akatawara Road and back to Ngatiawa Road End! About 100 meters from the road end Tracey and I waved down the van, glad that we hadn’t inadvertently missed each other!

We were just in time for a customary post-tramp coffee in Waikanae before the shops shut. The road walking was a rather anti-climactic end to the tramp, but better than being lost on the Waiotauru trails forever!