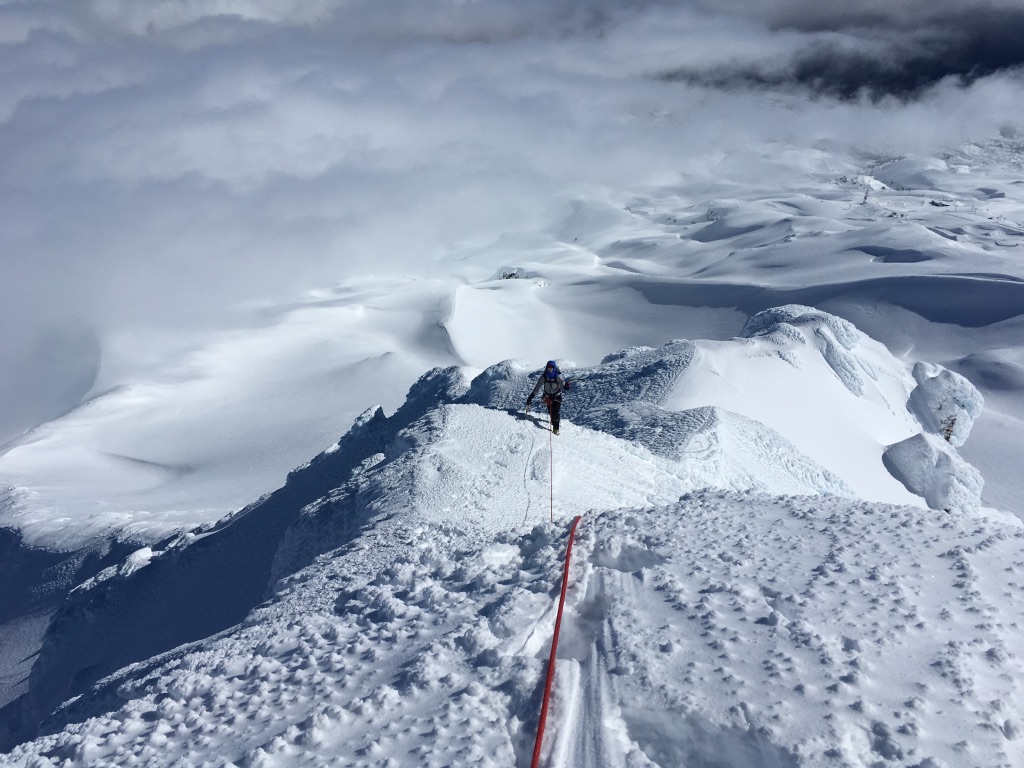 A whole week of snow made for an ominous avalanche forecast on Ruapahu, however we knew we’d be heading up to Ohakune as we had booked non-refundable accomodation at the LKNZ hostel in the town. On the morning of departure our other two members of the team reluctantly withdrew on the basis that it was quite unlikely we’d get up the mountain.

So it was left to just myself and Elisabet to head up and try our luck. We arrived at the hostel in good time, and one last check of the forecast before bed showed that the access roads were unlikely to be open early, meaning the prospect of a lazy start.

Sure enough, the road didn’t open until just before 8am, so we had plenty of time to have breakfast and prepare the gear. Getting the snow chains on at Massey Flats was difficult as the biting southerly wind was a sobering reminder of what we were in for! In amongst all the furore of planning we completely missed the fact that whilst we had brought all the necessary gear, us ‘old experts’ had forgotten the sunscreen. Will let you guess how that one played out (for a spoiler see the picture at the end…)

We spent a bit of time at the ski field base asking around about conditions up the mountain. The ski patrollers we ran into said they hadn’t ventured higher than about 1900m but that we were to stay away from the field at that altitude until they had carried out heli-bombing later on in the day. So we duly obliged by dropping off the field behind the Nga Wai Heke chairlift and gaining the ridge beyond the boundaries. We had expected to find really unconsolidated snow which had been loaded from hard SE winds, but were surprised to find that whilst it was soft, it was well packed beneath the surface. There was a slab present on westerly aspects, however it was very stubborn and much thinner than I was expecting, so we were comfortable to continue onwards with the knowledge that we’d spend the majority of our time on the windward Southerly aspects and ridge lines.

We arrived at the base of the South face of Girdlestone 3 hours after setting off. At the point that the rime ice bulges start, the terrain steepens quite quickly, so we attempted to build an anchor to start pitching. The snow in the obvious safe belay spot was simply too loose to build anything, and after some discussion we decided we were happy to continue on up to the next ledge unroped. Beyond here the quality of snow increased massively and we found some fantastic anchors, sometimes taking 20-30 hits of the stake to drive them in. It wasn’t the route I had planned for us to take originally, but given the later start, it would have taken us too long and we weren’t keen on getting benighted. A bit of route finding was required but all in all it was a very enjoyable solid ALP2 grade climb, 3 pitches in all.

We stopped for a bit of lunch in a sheltered spot after the second pitch, and Elisabet was convinced it would take another two pitches to the summit. Hence her surprise when she realised I was belaying her up the 3rd pitch from the very top. The smile on her face was priceless!

We spent a bit of time soaking in the amazing views from the top, and surveying the traverse up to Tahurangi for a possible attempt next year, then began our descent down the Voie Normale route. With hindsight we didn’t need to rope up for it but decided to down pitch it simply because we had all the gear out at the time. We easily got down to the first saddle where we sat out the planned heli -bombing on the upper reaches of the Turoa ski field. We’d talked about descending the way we came, but felt that all in all the safer route was back out via the Skyline Ridge given the waning daylight that would soon be approaching, and the steepness of the ascent.

Once we were certain the bombing had been stopped (they didn’t appear to dislodge anything from what we saw), we began our fast escape via the glacier, heel plunging all the way down and across to the Skyline ridge in no more than about 15mins. We headed down into the encroaching cloud and sleet, following the ridge all the way as far as the base of the High Noon chairlift where we followed the lifts all the way back down to the car. All in all we spend 7.5 hours for the route, with surprisingly good snow and weather conditions.

It was a real luxury to be able to head back to the hostel and enjoy warm showers, sofas and real bed linen! We went for a stroll in the evening but the town was dead with everyone packed into the bars watching the rugby.

Next day was lovely and relaxed; late start with coffees (three to be exact!) and pancakes for breakfast, a bit of retail therapy in the Marmot outlet shop, and a play around at the clip n climb. We were having lunch in Bulls, then home and doing our unpacking by 5pm. Textbook weekend!