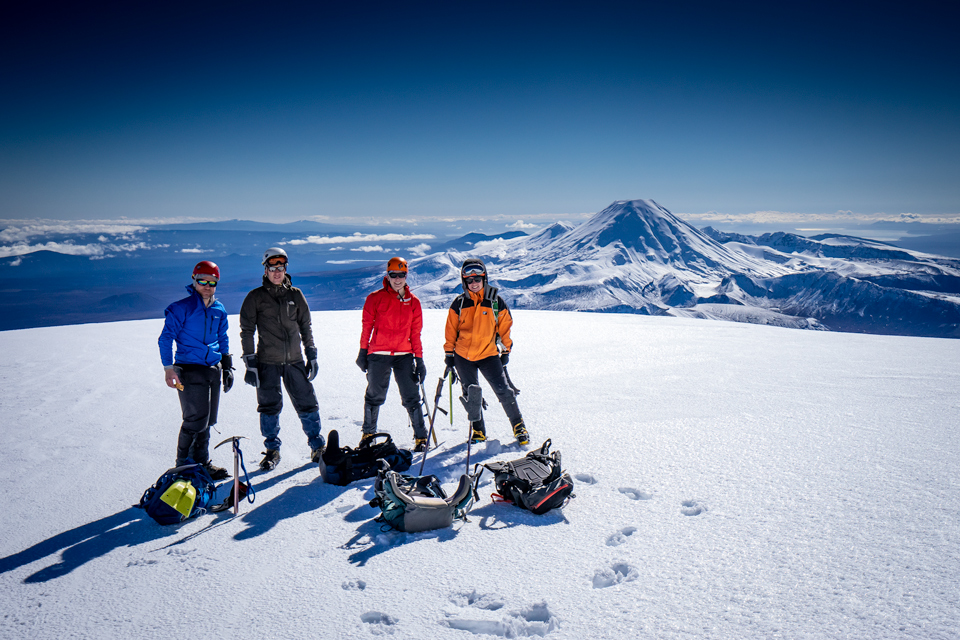 Like the other snowcrafters who had recently completed the WTMC snowcraft course, I was itching to get out on a “real trip” to see what it was like. I had found snowcraft hard. The physical and mental effort required was so much greater than tramping, and I found it frustrating that I couldn’t seem to master simple actions. After an experimental excursion to Ruapehu with some very patient friends (thanks George and Shauna!), I had even begun to wonder if snow tramping was for me!

Cue our fearless and formidable vice-president, Tony Gazley. After snowcraft, Tony had sent around a spreadsheet with at least four different weekends where he offered to lead snowcraft daytrips for all of us recently graduated snow babies, weather permitting. Unfortunately the weather hadn’t been very permissive, so it wasn’t until the weekend of 23-25 August that the first of these trips went ahead. And it just so happened I was free that weekend, and also in need of a confidence-boosting snow experience!

Tony did all the organisation for the trip. This included the logistics (ie driving up on Saturday night, camping at Mangahuia campsite, doing the trip on Sunday and returning home Sunday night) but also more importantly, planning the route, assessing the avalanche risk, and predicting the weather. As I lay in my sleeping bag on the Saturday night I thought that if I couldn’t get up the mountain with Tony having taken all the mental hard work out of the trip, and with excellent companions like Emily, Bart and Tim, then there really was no hope for me!

Sunday dawned a beautiful and clear day. We were on Whakapapa ski field by 7am (and even at that time in the morning we were lucky to get a park!) The lifts were not yet open so we largely had the ski field to ourselves. We followed the ski tracks, trying to keep to the edges (apparently people pay good money to ski down tracks where no silly trampers have been along roughing it up!) About halfway up the Waterfall Express chairlift we were accosted by an RAL employee who ushered us out of the way of the run out of some avalanche blasting. We had to wait around a few minutes under the lifts for them to finish their blasting in this part of the skifield before we could move on. I had never heard avalanche blasting before and it sounds horrible – just like bombs going off.

On our way up to Knoll Ridge Café there were at least two occasions where I asked Tony if I could put my crampons on – but no! We had to manage without! Luckily the first time Tony kindly kicked some steps up the slope for me, and the second time I may have used a sneaky knee to get myself up on a ledge (which is a big no-no, knees are slippery). We had a break at Knoll Ridge while Tony checked with the staff about avalanche blasting on our route to Te Heu Heu, and I stayed inside the loos as long as possible – they were soooo warm!

From Knoll Ridge, we followed what I think was the Valley Highway ski track, and then crossed over the tow bar (beware of being hit by a tow bar from above!) It was at this point that Tony began asking us to pick the routes and explain why we had chosen them. We avoided a climb up a steep slope onto the ridge to Te Heu Heu and instead opted for a nice track cut by one of the snow tractors into the side of the hill. The track exposed a wall of snow, and this gave us the opportunity to look at the layers snow we were walking on – including touching them with our ice axes and gloves to see how soft/hard they were. We concluded what Tony already knew – that the snow was safe to walk on! We then continued in a zig zag fashion up to a little plateau above the pinnacles. From there I got my first view of Ngauruhoe. The view is like being in a plane, but much more detailed. I remarked that it didn’t look real!

We had a short rest and then I somehow ended up at the front, leading the group up the ridge. While that sounds very straight forward, I was nervous about keeping right in the middle of the ridge – with a cornice to our left (which Tony had pointed out earlier to us, and reminded us that they can break far back from the edge) and the steep slope on our right going back down to the ski field. On top of that, the ridge itself just got steeper and steeper! When we came to our first little obstacle, a mixture of rock and spaghetti ice (I cannot remember the proper name for it, and cannot find it on google, but we agreed it sounded like Italian pasta), Bart and Tim took over, taking an adventurous route around. I followed Emily, who took a safer route through the obstacle itself. Much of the climb up to Te Heu Heu from this point was like this – stretches of steep ridge walking, with a spaghetti ice obstacle or two thrown in. Of course the others seemed to leap over these, but Tony very patiently stayed behind me the whole way and told me to go at my own pace. Eventually, we were over the tough bits and about half an hour from the top it was just a steep walk. However, I suddenly felt out of breath (even more out of breath than usual), so those last few steps were punctuated with lots of rests. Eventually I wombled up behind Emily, Bart and Tim onto a flat bit. There were no more white hills in front of us – just deep blue sky. I knew we must’ve been at the top but I still needed Emily to confirm it – had we actually got there? Yes we had! What a feeling!

Even without much wind, and a clear sunny day, it was still cold at the top so the first thing I did was put more clothes on. Then I could finally sit down and enjoy the view without worrying about falling. I felt quite chuffed that I could eat my marmite and cheese sandwiches while looking down at Ngauruhoe between my crampons.

Tony suggested, and we agreed on, a gentler descent down the mountain. This involved walking west over Tukino Peak and down to just under Glacier Knob. Here we started descending to the ski field. Some of us inched down with side steps, while others simply sat down and bum slid the entire way down to the ski field! While bum sliding was attractive in that it was quick and cooled you down (the sun was boiling hot by this point), I was scared of an uncontrolled descent, so I persisted with what must have been irritatingly small and slow steps.

Eventually back on the ski field we wound our way down the edges of the ski tracks, passing the spot where we had set up our camps on snowcraft (Delta Corner). The steep face we had front pointed down on that trip didn’t look so steep anymore, having just come off Te Heu Heu. Tony led us efficiently back to the door of the Lodge, where he bid us farewell as he was staying on to ski (in fact, he did the exact same climb again the day after, only with his skiis on!) Emily, Bart, Tim and I made our way back down to the car at the very civilized time of 4pm.

I spent the whole journey home being thoroughly pleased with myself that I had done an Alp 1 trip. Of course it would not have been possible without Tony, and Emily, Bart and Tim. As always, I am so grateful for the company and support of our awesome club members.