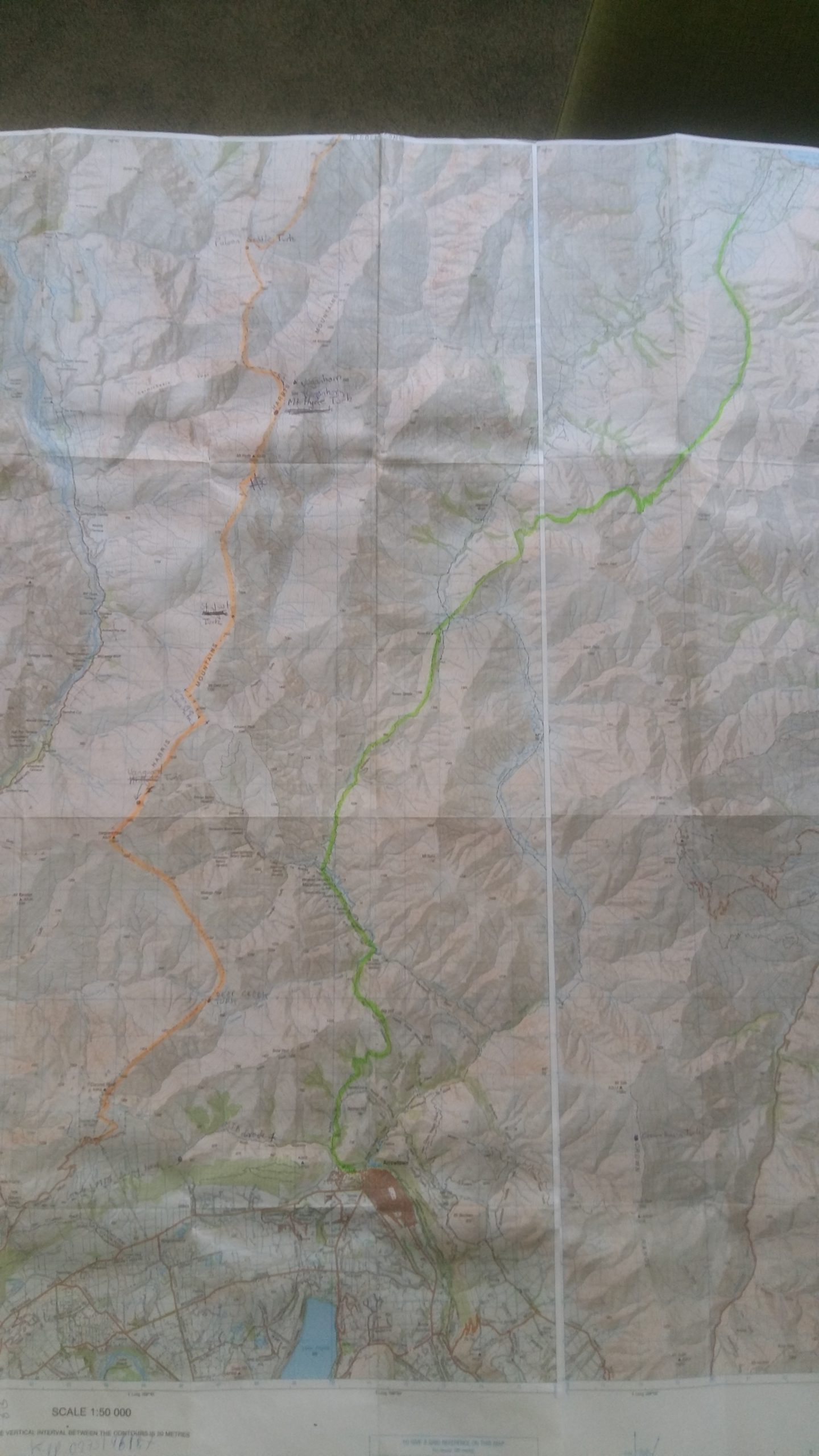 The Mahu Whenua covenants were established by Robert Lange of Soho Property Limited in partnership with Queen Elizabeth II National Trust in September 2015 to ensure the protection of around 53,000 hectares of iconic New Zealand high country between Queenstown and Wanaka (1). Approximately 70% of the 60km Mahu Whenua Turk Traverse is on Coronet Peak Station land that is owned by Soho Property Limited. The remaining 30% crosses Public Conservation Land(2). This alpine route between 600 m and 2056 m, is predominantly along an exposed ridgeline that gives stunning views west over the Shotover River to the Richmond Mountains and Aspiring National Park, and east across the Motatapu Valley to the Crown and Pisa Ranges beyond. The Turk Traverse of the Harris Mountains can be walked in either direction.

The inspiration and enthusiasm of Erik Bradshaw (based in Arrowtown) created the NZ Turk design and founded the Mountain Turk Club. ‘The five Turks were completed, even with COV19, and flown into the mountains’, I read in the October Mountain Turk Club newsletter. My postponed operation in late November gave me an option of two weeks rattling around home in Wellington or flying south and walking the Turk Traverse. A cheap flight decided for me, and once again I was flying south to Queenstown.

Erik had envisaged the Traverse being walked north to south, as a four to five day ski touring route in winter and a summer tramp. A $2 bus from Queenstown Airport only goes as far as Arrowtown, so I started  tramping the route in reverse beginning at Coronet Peak Ski Field and exiting from Treble Cone Ski Field on the Wanaka – Mount Aspiring Road.

Note that the Turk Traverse can start in Arrowtown by ascending the Bush Creek walking/mountain biking track by the Arrow River which gives direct access to Coronet Peak ski field car park. Or ascend Bush Creek and head east along Brow Peak Ridge and sidle north which requires 300 m less of ascend and descend, to Deep Creek Turk.

Erik asked me to write an inventory for each Turk along the traverse as his family were planning to walk the route in reverse in two weeks and he was interested in walking times, water in the new tanks, and if gas was in every Turk. Apparently I was to be the first person to walk or ski the traverse since all the Turks were put in place.

The organised wilding pine removal weekend near Coronet Peak Turk shrunk to a day due to the inclement weather forecast. Eight of us walked into Deep Creek Turk from the Coronet ski field car park (3 hours). The threatening rain shortened my volunteer assistance as I hoped to get to Vanguard Turk (5 ½ hours) before the spits turned into rain drops, there being no shelter along the whole Harris Mountain range.However the  weather was kind as I walked over Vanguard Peak (1750 m) and reached the turk before the droplets landed. Warm, dry, with an excellent library and view, I had a great night’s sleep as the wind blew by outside.

I headed north the next day towards St Just Turk, the orange waratahs on the track from Advance Peak (to the east) and Strobles Flat in the Shotover river valley (to the west), can be followed for a kilometre to enable a sidle below Mount Saint Just (1729 m) on the western side. The St Just Turk at 1550 m could be seen for hours before I arrived at the front door, the  2.5 hours walking time is the shortest distance between any of the Turks. After completing the inventory and the mandatory cup of tea, I walked 3 ½ hours to Mount Hyde Turk, planning to stop there for the night.

The beautiful broad ridge became sharp and at Pt 1925 and I dropped a few hundred metres down the western side of the ridge to miss the bluffs and weetbix jardons, returning to the ridge between the twin peaks of Mt Hyde (2056 m). After crossing the northern twin peak I sidled east of the ridge before returning to the westside at the saddle where Mt Hyde Turk is located. Today was the most technical, exposed day.

There are two route options between Mt Hyde Turk and Polnoon Saddle Turk. Continue north on the Harris Mountains range over the locally named VeganHorn (unnamed 2030 m peak) and another named high point on the ridge called Motutapu (2030 m), before descending west along a spur to Polnoon Saddle Turk. Or from Mt Hyde Turk sidel the basin to Pt 1729, and head north over Siberia (1810 m) to Pt 1801 and descend directly to the Polnoon Saddle Turk 500 m below. (4 hours).This must be one of the most stunning descents I have seen for years. Alas my camera and SD were not talking and I can’t show you a picture.

After an idyllic tea break and an inventory, I toyed with staying an extra night or completed the traverse in three days. The weather was perfect, a cooling breeze on a warm day, excellent visibility and I decided to continue north. I crossed the stunning wetland, source of Blue Creek and Motatapu River that flow 180 degrees away from each and climbed back up 650 m to the lunar white landscape on the eastern side of the unnamed 9km ridgeline to the ski field top lift station in 5 ½ hours. Then a weary 1 ½ hour descend on a 4WD track to the ski field car park.

Fortunately my ride appeared at the carpark a minute after I arrived and I was whisked off to Wanaka in an hour. To access the ski field road, a combination code for the locked bottom gate can be accessed online in advance. Otherwise it’s a 7 ½ km descent on a narrow gravel road with seven hairpin bends.

To make a fantastic round trip the Mahu Whenua Turk Traverse could be combined with the 34 km Motatapu Track that links Wanaka to Arrowtown (see map). I suggest starting at the northern end and booking a shuttle from Wanaka to the bottom of Treble Cone Ski Field Road on the Matukituki Road (unless you know someone with a four wheel drive that can take you up the ski field road). Take food for four or five days to walk the Mahu Whenua Turk Traverse. Pre book your turk accommodation on line at  https://mountainturk.nz/booking/.

Stock up on supplies and coffee in Arrowtown and return to Wanaka via the three DOC Huts along the Motatapu Track. I walked the Motatapu Track in July 2020 and we had snow on the passes and the huts to ourselves. Interesting to note in the log books over 400 people had walked the track between 1/1/2020 and the start of lockdown on 25/3/2020 as the track is part of the TA. Pre Covid 19 the ratio of Kiwis to overseas visitors was 1:4 and post Covid 1:1.

If you want a hot shower the campground in the centre of Arrowtown has cabins, campsites and is close to an excellent supermarket and cafes.There is no known source of stove fuel in Arrowtown, buy in advance from Wanaka,