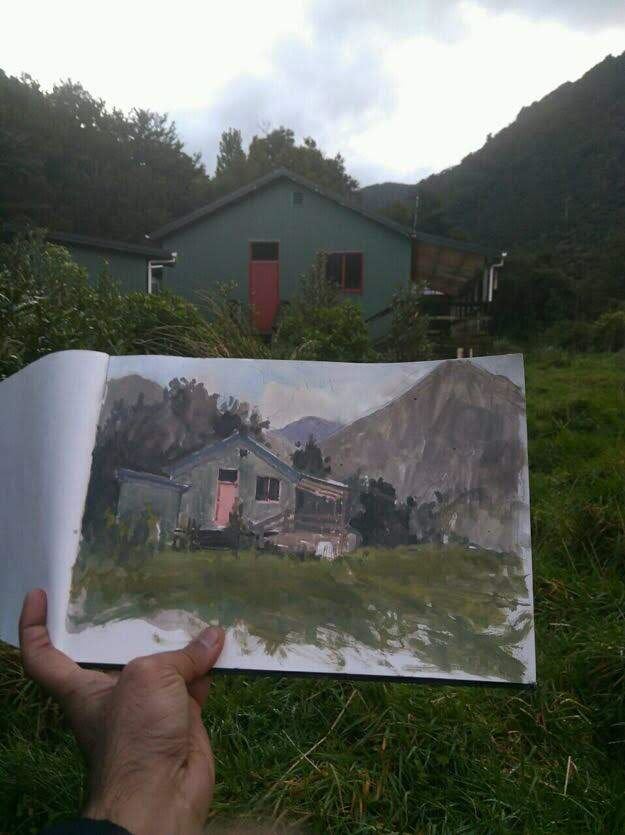 The trip started with an early Saturday morning meet at Wellington train station. It was a grey morning and a bit drizzly but with half the group on their inaugural WTMC trip (Ravi, Phoebe and I) and Lettie on debut as trip leader, nothing could dampen our spirits. We set off with the Sayers Hut group in the minibus and headed North into the misty Hutt Valley. We had a short stop before tackling the Rimutaka hill road to figure out how to stop the hypnotising and slightly irritating sound of the windscreen wipers squeaking back and forth on dry windows. Problem solved, Lettie expertly navigated us through the twists and turns of the hill followed by a typically impatient trail of vehicles. We had a traditional last loo break in Carterton (where they need to fix the door locks) before heading off to the slightly more remote and lesser visited Mangatarere Road end.

Some more expert driving through “unmaintained” narrow gravel roads full of potholes, cambers and fords took us to the end of the road and the start of the weekend’s adventures. We didn’t hang around too long once we were there and following a few bag adjustments and last-minute wardrobe changes, we were off up the muddy path along the tributary. Five minutes into the walk and with recent heavy rainfall, we came across the first mini-river-crossing. The newbies tried plotting a route across using stepping stones to avoid getting our feet wet. We even threw another larger rock into the stream to use it as a stepping stone but it sunk and rolled downstream in the current. Trip leader Lettie, clearly knowing what was in store for us, waded across without hesitation so we all duly followed and got our feet sopping wet. Soggy socks are never nice and unfortunately for us all that was the last time any of us had dry feet until Sunday afternoon!

‘Totara Flats” is actually a very misleading name for this trip because it is actually quite a lot of ‘up’ and it’s not an easy up when wet; more of a slip-and-slide. The sign at the start of the walk said ‘3h30’ to Totara Flats Hut but it was clear early on that we were not going to achieve that. We slipped and scrambled up the ridge through what felt like a seldom used route and it begged the question, “who first walked up here and why?” That of course made it all that much more exciting and we were all loving the challenge. 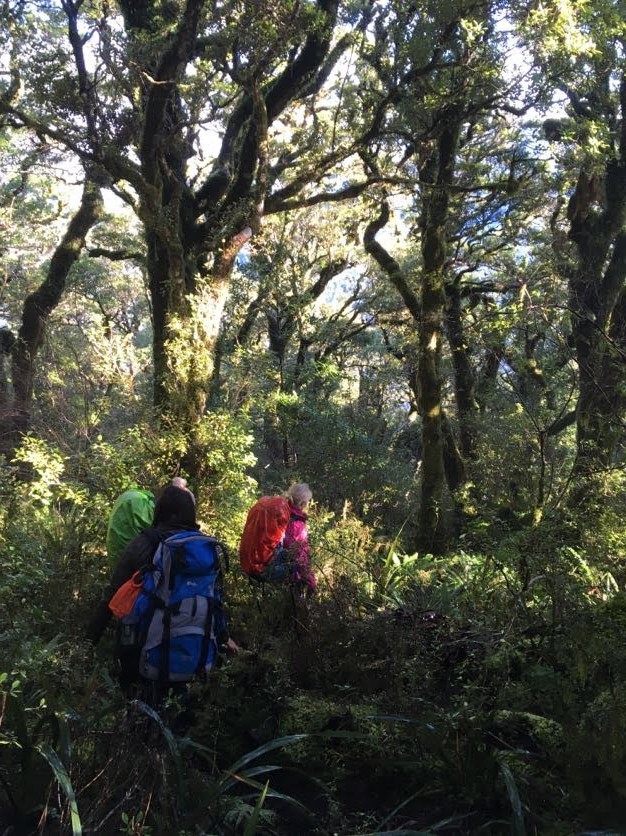 I don’t know what everyone else was thinking but my thoughts as we climbed were mainly focussed on how we were going to get down!? Nevertheless, we soldiered on up trying not to whip each other in the face with overhanging branches and time seemed to fly as we chatted away about everything and anything. As it turns out, no-one on this trip was a kiwi and everyone had such an interesting story! 1 Swedish, 1 Portuguese, 1 Indian and 3 British. 3 PhDs, a construction manager, a fire engineer and a research fellow at Victoria University – we had a lot to talk about!

We made a lunch stop near the top but the bitter wind and relatively slow progress made it a quick stop. After a few false summits and too many times hearing Patrik say “I think this is the top”, we found ourselves at the top and in a dense goblin forest just as the sun tried to break through for the first time. Many photographs were taken as the sun beamed through the green canopy and made rainbows out of the misty trees. It was one of those ethereal moments when you really feel close to nature and the kind of moment you tramp for. 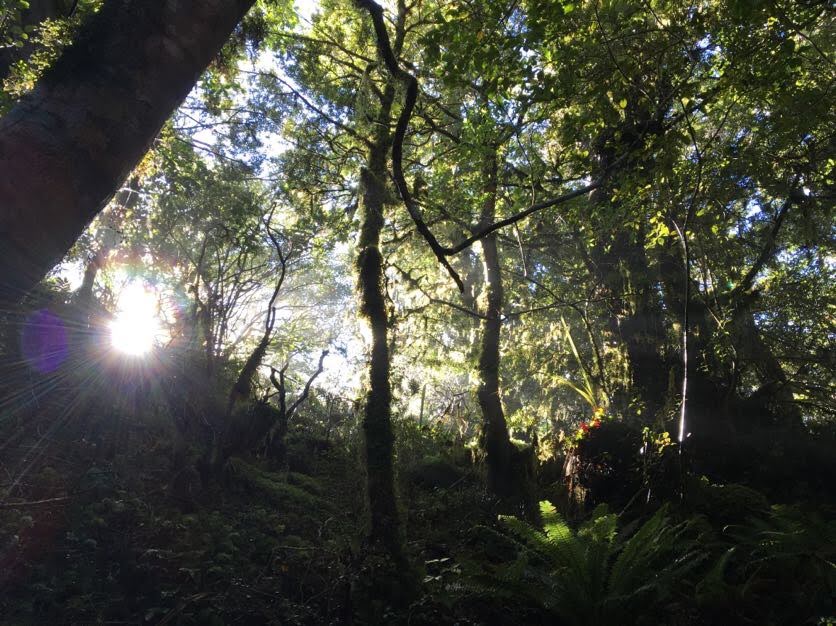 The long decent was tough going and there were a few slips and trips. Patrik had a good tumble and Ravi managed to twist his knee on some roots. None of these were enough to stop us though and having heard the mighty Waiohine River for some time, we eventually spotted it through the trees. The last half an hour disappeared and suddenly we found ourselves on level ground, walking along another little tributary. Finally we reached Sayers hut after 3h30 and the sun came out to celebrate with us. As well as being an old quaint little hut, it claims to be the Tararua’s police station and place to register births, deaths and marriages. With nothing to report, we jotted some notes to the Sayers Hut group to let them know we would be later than expected the next day. 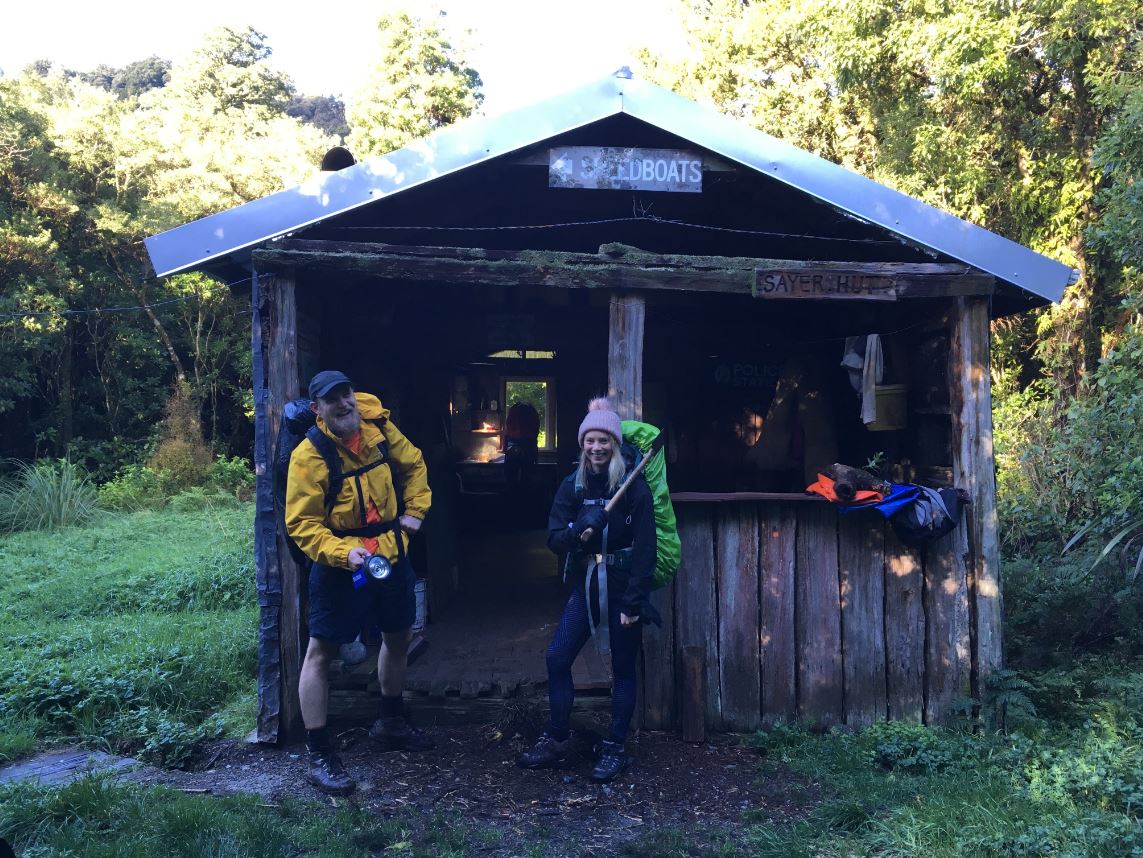 The next question on everyone’s mind was whether the river was crossable or whether we needed to have an hour scrambling over rocks on an unmarked trail. With the autumn light fading, Lettie and Patrik went to test the waters whilst the rest of us pottered around and discovered that Ravi is an incredibly talented artist. Quickly sketching Sayers Hut with great attention to detail and then whipping out the water colours to dab the hut to life on paper. Not enough time to finish though as we got the green light from a confident Lettie that we would be getting out legs wet.

We carefully rock-hopped over to the main river, which at this point was flowing fairly fast and was pretty wide, although mostly less than knee-deep. We plunged in no questions asked and started wading our way to the other side. First thoughts: “This is so cold I can’t feel my feet!” Once our legs and feet numbed, we made our way across in a relatively indirect route as we discovered the water at one point was slightly deeper than we had first anticipated – up the lower bum cheek. Our linked crossing wasn’t a masterclass by any stretch and when we eventually made it to the other side, we realised we had spectators in the form of some hunters. “Do you know where you’re going?” Of course we did and the last 2km only took 10 minutes, which was a relief to everyone. We reached the hut 4h30 after leaving the road end. 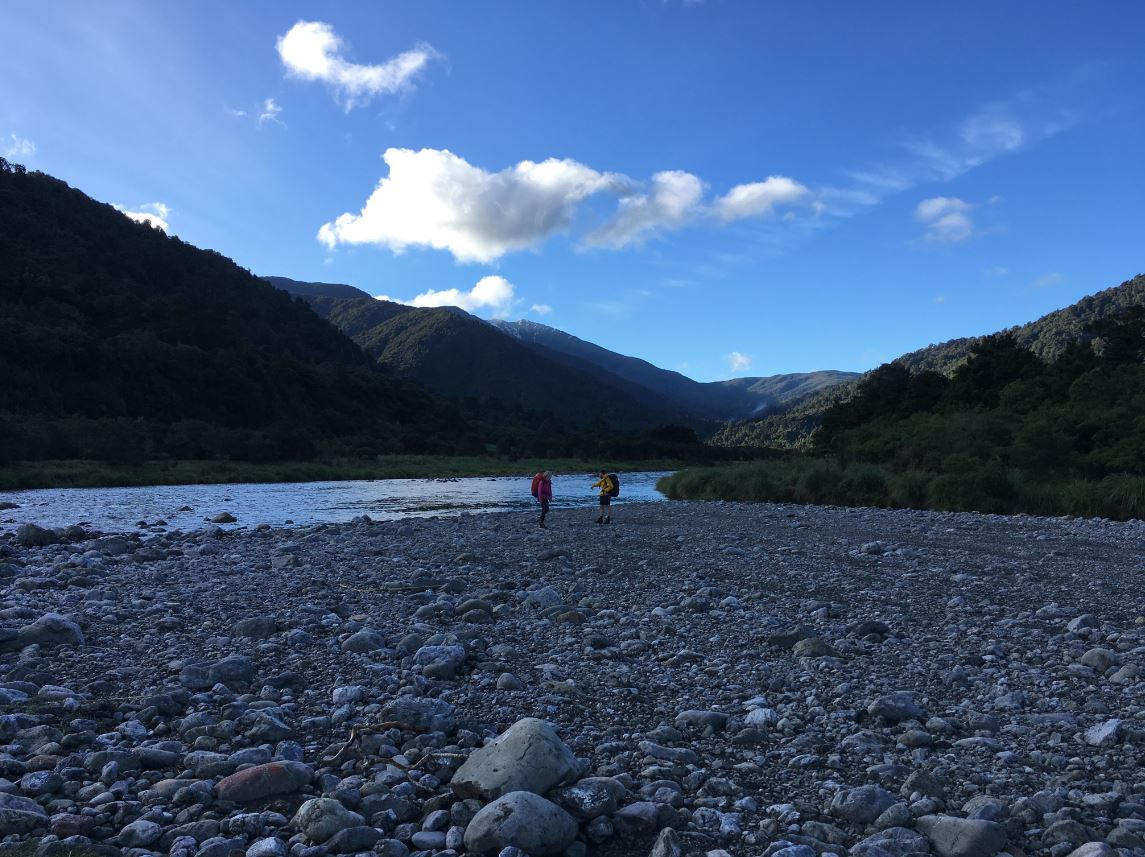 After playing with a couple of hunting dogs with antenna on their backs and grimacing at the dismembered pig, we got inside and into some dry clothes. The evening was filled with stories, card games, peanut vegetable noodles and muffins. Diana and Lettie ruled the card table, winning knockout whist several times each! Ravi also wowed us all again when he came into the hut an hour after arrival and produced an incredible painting of Totara Flats Hut – see below and be amazed! (FYI – Ravi has an exhibition coming up in Wellington so get in touch if you want to go along!)

We all slept ok despite a nearly-full hut and some particularly loud snoring through the night and woke up to a cold, wet morning. Luckily we knew we wouldn’t have to get back in the Waiohine and walk for 4 hours with wet feet as we thought we might explore the unmarked track on the other side of the river…WRONG! The hunters told us this would take much longer as the terrain was difficult, so not wanting to keep the other group waiting, it was back to the river. With a hearty breakfast in our bellies and running only very slightly late, we re-traced our steps. Just like the night before, it took us no time at all to get to the river, and this time we nailed the linked crossing. We had a clearer view of the shallower parts of the river from this side, so could nicely avoid the deeper channel. As we were in such high spirits, we even got back in the river for a few snaps! 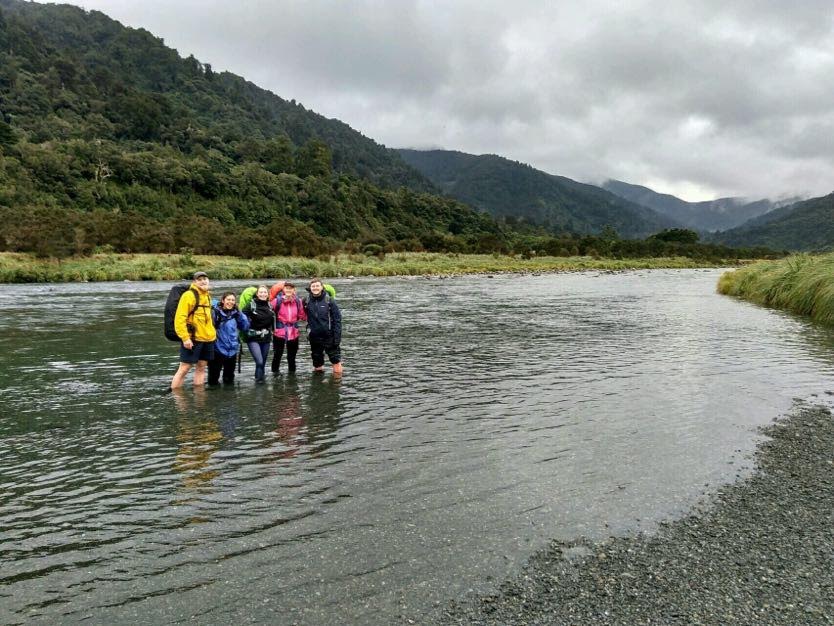 Sayers Hut was still smoking from the night before and we arrived about an hour after the other group had departed. We had a quick break in the drizzle and chatted to the other group’s hut-mates, who were just setting off with their dog. The walk up was at a pretty steady pace and Ravi lead the way, despite having struggled with his leg from the previous day’s injury. We passed the time with plenty of topics, including the recent mountain lion attack in USA, life in Portugal and Svalbard.

We had a few quick water breaks but nothing too long as we were later than expected. The only thing that slowed us down was the state of the track on the way down, although we were expecting it to be tough. Patrik led us down the slippery slopes and entertained us with his many noises coming from out of view at the front. There were a few more slips from the group but nothing life-threatening and one way or another, we all managed to get down the muddy trail. The terrain finally flattened out and we hit the river again, where we all washed our muddy boots and legs before trudging back along the stream to the minibus. The other group had just got into warm, dry clothes and had food in hand – we were all very jealous and followed suit.

Having dreamed of a hot drink and food all the way down, we decided to make a stop in Carterton at the Wild Oats – heavenly. Lettie did another sterling behind the wheel and we were back in Wellington before we knew it, having been treated to some dramatic and beautiful views over the hill. Another successful WTMC trip and a great start to Lettie’s trip leader career – some big decisions made, everyone back safely and everyone happy as Larry (whoever that is).