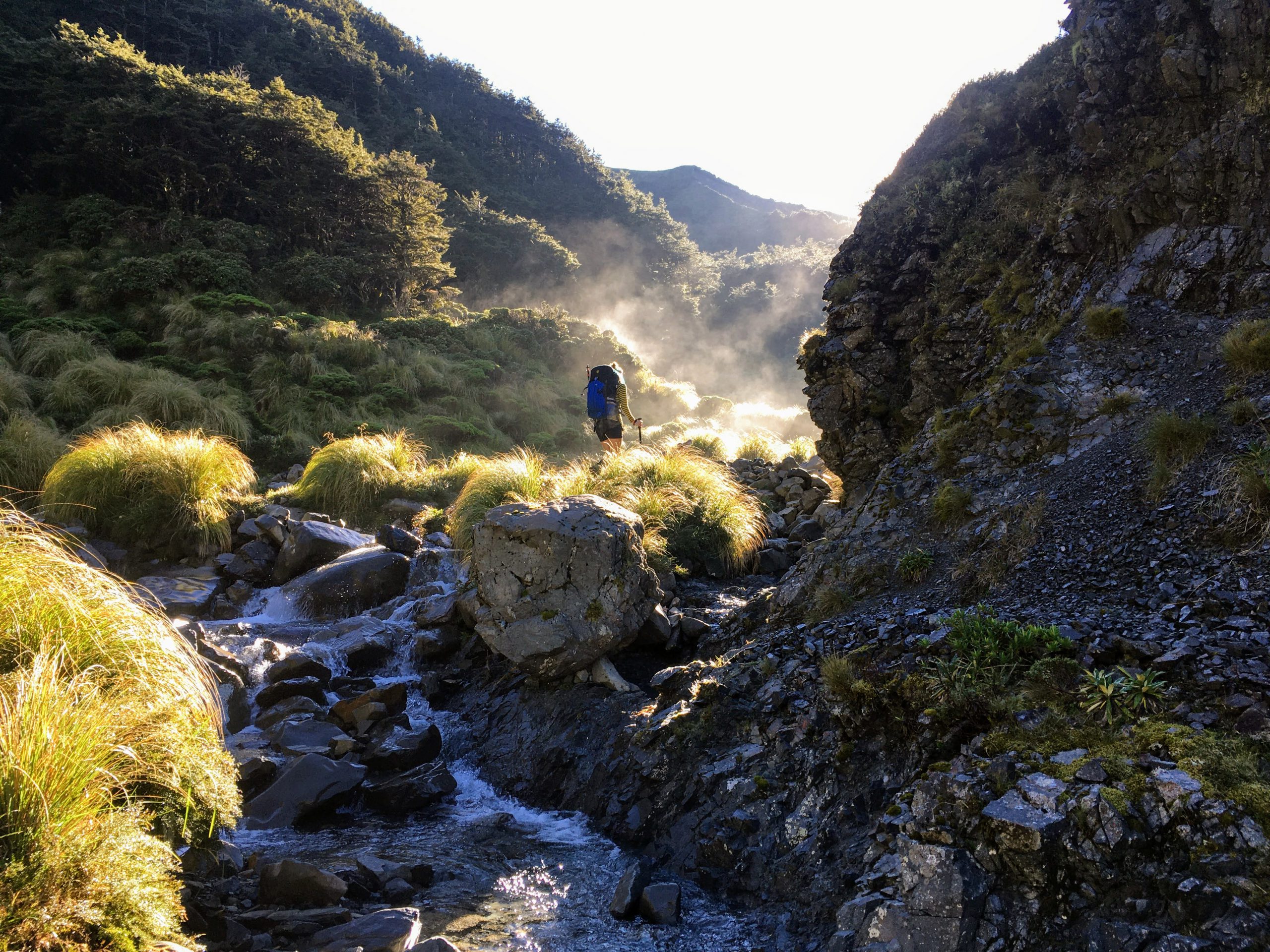 This trip started life as a short weekend trip to the Seaward Kaikoura range to do a Kowhai circuit but early on in the planning it was clear the ferry times were not going to accommodate our needs. Everyone who had already signed up was automatically transferred to my chosen alternative which was based around climbing another of “New Zealand’s Top 50 Tramping peaks” as decided by Wilderness Magazine c.2015. I recently rediscovered the centrefold pull-out map which located all these peaks and have been able to tick off a few more that I’ve climbed in the intervening years and use the remainder as trip planning motivation! Everyone seemed happy with the alternative plan – even the ones who only found out about it a few days before the trip!

I warned the group that although this was a Medium trip it was mostly off track with both ridge and stream travel and some scree so it would be different to a track-following type trip. People still seemed to want to come along so eight of us drove to the North Block Road end in the rain on Friday night arriving at 10:30pm by which time it had stopped raining. Two hours of sleepy and sweaty uphill staggering later we arrived at Sunrise Hut and attempted to be as quiet as eight people arriving at a hut after midnight can be. Next morning our midnight climb proved worth it as we were indeed treated to a not too shabby sunrise from Sunrise Hut while the billies were boiling.

A father and son at the hut gave us some very speedy estimates for their day trip ahead – they were planning to lunch at Waikamaka Hut where we planned to stay Saturday night. With clag hanging over Te Atuaoparapara we dropped our packs and took a detour down to Top Maropea Hut which for some of the group who’d stopped at Triplex Hut for water the night before was their third hut before morning tea on Saturday of a weekend trip. The detour was a 200m descent and we enjoyed the climb back up without our packs. Ruahine Mountain Dolphins may or may not have been sighted during this detour.

Back at the junction we started the off track adventures dropping down into the saddle on a good foot-pad and working out way through scrub with the odd bit of pink tape to help us avoid the worst of the leatherwood.  We had a 300m climb to Te Atuaoparapara and stopped just short of the summit to eat our lunch in the lee of the wind.

We had a good long lunch as by this time the clouds had cleared and we were in the sunshine. Post-lunch we continued along to the summit which Tom named the Devil’s sandwich due to the four sets of bluffs marked on the map looking like quite a scary sandwich. Anne had been teaching some of the group navigation skills the previous weekend so we spent a few minutes putting these skills into practice by taking bearings from the top to confirm we were descending between the correct parts of the sandwich.

The next section was ‘spicy’ according to the group. We traversed a very exposed and narrow ridge line and then dropped down a scree slope which some people enjoyed more than others but everyone coped with very well. Then there was some beautiful easy tops travel with views over to McKinnon Hut and down to Waipawa Hut where we would be headed the next day.

More descending in tussock and rock interspersed with speargrass brought us to the Waipawa saddle. From here we took the poled route down into the headwaters of the Waikamaka River and rock hopped for about an hour down to Waikamaka Hut. This creek section was gorgeous but required concentration for those joining the competition to keep their feet dry. We arrived at the hut at 16:30hrs.

Waikamaka Hut is blue and orange and very well appointed for an eight bunk hut. It belongs to the Heretaunga Tramping Club who obviously take good care of it. Notable features included a light bulb and a rocket ship shaped toilet! We set about swimming, changing, billy boiling, snack eating and stretching and all the other joys of arriving at a hut after a decent day of tramping when you still have a bit of time before preparing dinner.

Nutty rice, one of the less commonly cooked club recipe book meals, was eventually concocted and enjoyed, followed by a round of Oreo cookies as a fail safe vegan dessert.  Jon had been keeping us all guessing throughout the day as to what he had brought along for dessert so we made sure everyone was present for the big reveal!

At some point during the evening, two hunters arrived and dropped their packs before heading off to see what they could find before dark. We re-arranged the mattresses to accommodate them and barely heard them come back that evening or head out just before dawn the next morning. By tramper’s bedtime we were all in our sleeping bags looking forward to an extra hour in bed as the clocks changed.

After singing Happy Birthday to Delia we were tramping by 8am, back up the stream to Waipawa Saddle. The stream was even more gorgeous in the morning sunlight with lots of steam rising as the valley warmed up. We stopped for a short break and a good look at the view from the saddle, then continued down into the scree-fed stream.

The stream on this side is quite different and much more of a mess. It took us three hours to work our way down to Waipawa Hut with lots of boulder-hopping and gravel gripping along the way. We had a quick lunch stop at the river by Waipawa Forks Hut and took the detour to bag the fifth hut of the trip as well as read the instructions on where the track up to the Sunrise track actually starts – the map confusingly shows the track up to Waipawa Forks Hut in the wrong place which had us all perplexed for a short while.

By 2pm we were back at the van, ready for a well-deserved ice cream! This was a great trip with good weather and a fun group who all enjoyed the variety of terrain we covered during the weekend. Unfortunately no confirmed Ruahine Mountain Dolphin sightings this time, but that just means we all need to go tramping again!