Q. How did you get involved with the WTMC?

A. I had done a few tramps for Duke of Edinburgh and was keen to do more tramping but didn’t know anyone else interested in it. I kept thinking I would go along to a tramping club but was too shy to go for ages. I finally got the courage up and went along to WTMC one night in July 2012 and signed up for a few trips. Before I knew it I was regularly going out on trips with the club and in 2013 I finally became a member. 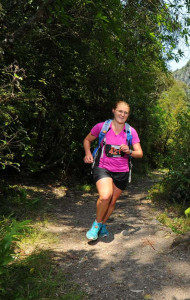 Q.What do you love about our club?

A. The people – everyone is so friendly and I really enjoy gaining knowledge from other members. I also like how I’m constantly spoiled with so many different trips to choose from each weekend!

Q. What was your favourite WTMC trip?

A. That’s a tough one. Each trip is fantastic for different reasons whether it be the weather making it an epic trip, the scenery or the combination of people on the trip. But if I was to pick my favourite trips would be:

-Kaweka Tops trip to Middle Hill Hut and Backridge Hut in January 2015 with Kevin Cole as leader – perfect weather and stunning views plus a few humourous hijinks that I accidentally caused along the trip….

– Valley SK with Megan Sety and Tony Gazley as leaders over Easter 2014. The combination of Megan and Tony is awesome. So many laughs, Banagrams, and wild weather that gave us a few challenges….

-Ruahine tops trip to Rangiwahia and Iron Gate Hut with Paul Christoffel as leader in July 2012. My first time meeting snow on a tramp….

Q. Why are you helping out with the OARSUM WTMC committee?

A. I was keen to give something back to the club as the club only exists because of all the work so many volunteers do behind the scenes. However, I was also aware that I was pretty busy with study and some other volunteer work but Mike Phethean came up with the perfect solution to this when he asked me about taking on the role as the emergency contacts co-ordinator as it’s a smaller role yet a vital one that must be done.

Q. What does your role involve?

A. The Emergency Contacts Co-ordinator ensures there are volunteers to be the Emergency Contact Duty Person each weekend. I then divert the WTMC mobile to the duty person’s. I’m also responsible for looking after the PLBs and their batteries.

A. Well, the next really big adventure for me is actually not a tramping one – it’s moving up to Hamilton to start my graduate nursing job at Waikato Hospital. I’m still going to stay a member of the club though as I hope I can get on some club trips on my days off. And I’m also going to be looking at tramping clubs closer to my new home.

Q. Pick three famous people as companions on your ‘dream tramping trip’—who would you pick, where would you go, and why?

A. I don’t really do famous people. I would just enjoy going on a trip with friends, plenty of super cool people within the tramping club already!!

However, in terms of trail running my ‘dream running trip’ would be to get out with some cool people I don’t have the opportunity to run with often. Inspiring people like Malcolm and Sally Law, Vicki Wolley, and Steve Neary.